Hiking is perhaps today’s most expensive form of slow travel.  This is not the jaunt through parks central or polite trails that are lined with the occasional bench or interpretive sign post but the hike that entails a serious drive to some trailhead in order to then strap on a pack with provisions and gear and to blunder into the woods for a given amount of time in some difficult terrain in order to see this brook, or that mountain.
Hiking is serious and add to that camping and this is today no longer the sport of simple fools, but those fools that can afford the tent, sleeping bag, maps, camp stove, back up camp stove, Meals Ready to Eat, and whatever else can be taken not due to the intrinsic utility of such object but because it only weighs such-and-such so why not take the three masted rotoscoping terpsichorean bike?  All this costs plenty of money.  Unless you want to use all that old heavy stuff out there in the garage.  That crap your uncle Mordecai gave you…

One place to burn your hard earned income not he joy of then carrying about your belongings in some refugee cosplay is to take all your wonderful REI stuff strapped to your fanny and push it up Mount Marcy. Mount Marcy is the tallest of the 47 peaks of the Adirondack Wilderness Area, and at the summit affords spectacular prize for the intrepid hiker to rise above the treeline and from this alpine summit (watch you don’t squash one of the rare alpine plants) and there strike many poses as well as attempt to show off the hundreds of miles in all directions you can see that just can’t be captured by our current iteration of the iThingy’s camera.  So, you will have to tell your friends, “you sort of have to be there” which is true.
There are several routes in, and one affords a simpler access point however it is not surprisingly more populous – especially on busy weekends.  The road less traveled is that from the Upperworks Road.  This is not some secret entrance.  It is a long and hard more often than not muddy traverse to Colden Dam and the first camping area and then on an additional four even more difficult miles until coming to the final section of boulder hopping and some shimmying to get up to the summit itself.  For many this is the preferred route since it gives access to less crowded camping, some options to go to different mountains, and of course the monument at Calamity Pond and view Lake Tear of The Clouds, the recognized starting point for the great Hudson River.   However, spoiler alert… it looks like a muddy and inconsequential pond. Most of the most important things in life pail next to the constant fodder we champ and chew, the CGI explosions, the volcano space alien gods, the movie star with the air brushed body.

While wilderness in its right, most of the trees (one can see a few from the trail that are the exception) are about 30-60 years old.  This is a young forest.  One thing to be aware of is that most of if not all of the wilderness areas of the Northeast were once battered and exploded dried up parcels of spent chit.  Logged, mined, poked and prodded, so much of our now Forever Wild was the site of some industrial activity over the past several hundred years.  It is amazing to hike for miles through impossible and imposing trails only to come across some abandoned blast furnace, block house, or quarry.  Eons ago one such endeavor was to mine for iron and smelt this into something that could be transported down the Hudson River.  Here, the Hudson River is no more than a piddling stream, and when it does enlarge to a creek there are often rapids and drops to hamper any travel.  There are two abandoned furnaces on the road to the Upperworks Trail head.  These are but the remaining monument to what actually was a failed venture sometime in the early part of the 19th century.  Closer to the trail is an entire lost village.  Buildings tossed into ruin by time and the elements.  When I first hiked the trail to Mount Marcy these structures were still intact enough to enter and cause some little mischief – however… today, they are but match sticks.  Hike as long and hard as you can.  Put in a full day, but you will come across others who have hauled in far more heavy a load and sometimes when I see arranged boulders and remnants of mines deep in the wood, my body has a sympathy fatigue for those old ones who passed through this world in a more virile ago oh so long ago. 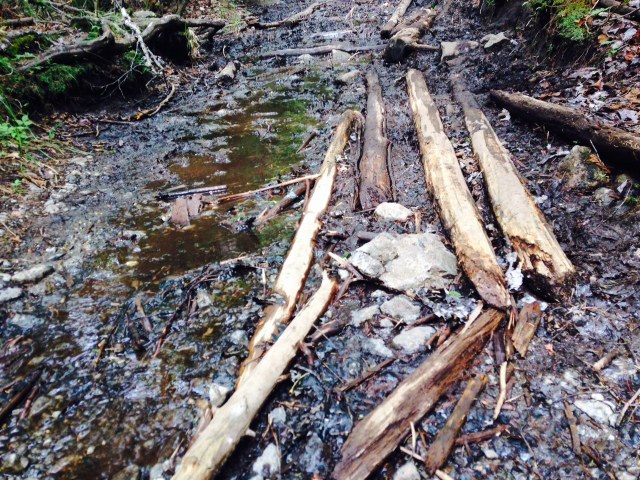 The trail of Upper Works at first passes through an area that was logged not too long ago.  When I first did the hike the wreckage of machinery and the clear cut forest somewhat spoiled the fantasy that I was pushing into the wilds of the green earth and I almost turned back wondering as to how long this spent and blackened landscape existed (this was before the Internet so I could not ask Uncle Googles). The trail pushes through and enters that richer forest.  This is also where the mud starts in earnest.  Real serious mud.  This is not child’s play mud pie material, oh no, not the “Junior wipe your feet or you will track it in” mud, but professional-grade, high refined, thick and splashy sucking mud.  Red, black, tan and gray, it comes in colours and textures to please all.  With a heavy pack sometimes one’s foot vanishes into the muck and you have to break open your Cub Scout book to look up quicksand and tar pits.  The sounds accompanying the hike are whatever few birds are about (if you listen you will know when you have ascended in altitude as the bird song is thinner as is the undergrowth) and the simulated flatulence of the splashing slickery sound of your companions, yourself, and the dog someone thought was a good idea to bring until he got all covered in mud and burdock as they slog along. 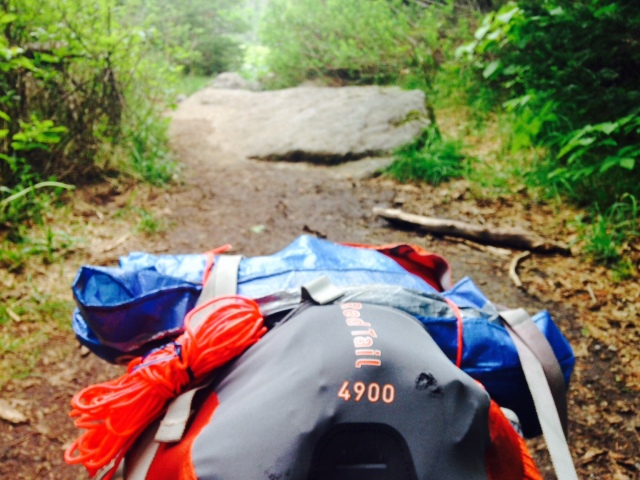 There are no views along the first several miles of the trail.  Then, of a sudden, you are at a lake and your eyes can again adjust to see something not three feet ahead and made of wetness.  You may need to put on or take off your glasses at this point.  The lake is not quite a lake but the Flowed Lands – more marsh then anything else – and the mountain you see is Avalanche Mountain, sight of, unsurprisingly, an avalanche of epic proportions that occurred due to a forest fire sometime in the middle of the last century that caused huge swaths of the mountain to flow into the… flowed lands.  There are two ways to go on from here.  Or stay at the lean-too – sight of an epic bear experience I had some years ago.  Stay on the official trail and climb yet another bump, or cut close to the shoreline and while you have to ford a stream and put up with more mud, it does shave off a few minutes.

The dam at Lake Colden affords yet another clear view of Avalanche Mountain and not much further on are the first clusters of official camp sites with one or two (I think one) lean-to structures.  Do not camp just anywhere and do not build a fire.  Again, the illusion is that you are in the Wilderness but at any time a Forest Ranger can manifest, just melt up from the forest floor like Mephistopheles and summons you for your misdeeds.  Also, the forest ranger station is about 2 miles away, or to measure by the ability of any ranger, about a 10 minute walk.  At the suspension bridge there is a fork of sorts as one can set up camp to the right or continue on to the left the 4 miles to the summit.  I have camped at this location three of the four times I have been to Mount Marcy.  I don’t plan to do this again as I am convinced it is haunted.  I just have nothing but bad “we’re sleeping on top of an Indian burial ground and I totally saw the film Poltergeist and know how that turned out” sort of heebie-jebbies.  Other than the Old Ones dwell in the forest here, it is a simple camping site close to water and with another lean-to and two privies.  Again, just when you think you have made some kind of a conquest by bringing your candy coated ass out in the woods with your granola bars and titanium pots, someone came here and build little houses and privies in the woods with chain saws and hammers. 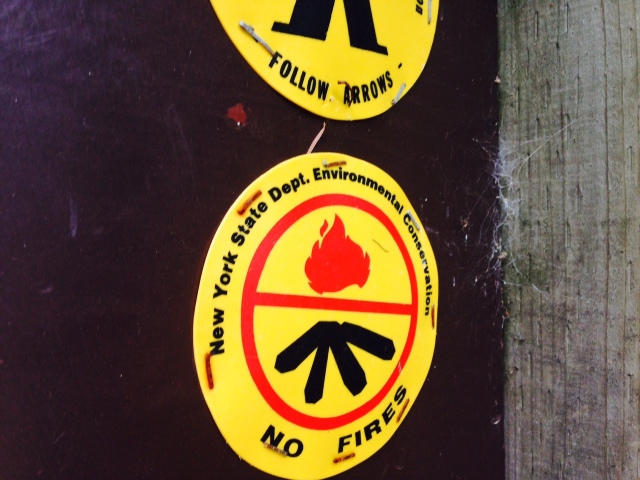 The trail up to Marcy turns ever more difficult or perhaps you are just fatigued and sick of slick rocks.  There is a hint of a reward as the stream next to the trail has formed many chasms though with millions of gallons of water are flowing (depending on the time of year).  Another great section of selfie-producing moments but the trail does not forgive.  At one point log stairs are the only way up and down, made difficult since a few steps are missing, and have been for years. And then another cluster of campsites, and the trail pauses in elevation for a moment before again ascending.
There are some very attractive options given along the trail to see other mountains.  Other summits that are closer, perhaps afford a similar view, but with Marcy there, the majority of non 47 devotees keep pushing ahead.

This time our hiking party did not summit the mountain.  Due to a series of unfortunate events and the limitations of the weekend, we were unable to get more than close by to the mountain.  Perhaps 3 or so miles, which seems to not be a considerable distance, but believe me, the trail is not something to be taken lightly.  We will try again in the coming months, perhaps the coming weeks.  Maybe we will avoid it all together and let the mountain remain in peace.  Having spent all that money on our camping equipment, it would be a shame not to use it again.

Editor’s Note: For detailed information on the park visit this wonderful site HERE.