“I can’t wait for the apocalypse,” he said.  Strangely, the thought that Doomers are correct, that this whole fabricated society built on the spindly legs of fake commerce, idiotic trending articles, and environmental destruction cannot last and that perhaps in my lifetime we will see a true “back to basics” is tantalizing and exciting.  It is the thought of the child trapped in school waiting for those long summer days off and the imagined adventures with pretend friends.  An ideal, and as an ideal, I do not smell this future, I do not have the hot ashes and dust in my mouth of this future, I do not feel the cold of this future after the change, after we are stripped by all the accouterments of Late Stage Capitalism and returned to the primal world of the elements.  That night, the elements were cold.  This could be what had been decades ago normal for the Northeast (the ONLY place it was cold this winter IN THE WORLD) since it was technically spring but at 3000 or so feet, it was winter and it was below freezing by about 20 degrees and we were camping.
As troglodytes our merry group had gathered in a rock overhang so deep it almost seemed a cave.  The ice piles describing the edges pushing up burms and closing in the sides into white and gray walls.  Those hugging arms of snow gave our hangout the cosy safe feeling of the cave, minus the typical cosy that means warm and comforting, and safe meaning you can’t just slip off the cliff whist taking a pee.  The surfaces in this campsite were hella hard to deal with: slippery nasty ice, hard piles of snice (ice/snow), stones, stones coated in ice and fuck you warm blooded animal.  I imagined that we were a long lost hunting party.  I thought to all those Vice documentaries about the Syrian refugees and I thought, this is the cold and ice of the lost, the Donner Parties, the displaced… except that we had ample food, sleeping bags for the cold (at least to 25 degrees Fahrenheit/ -3.88 Celsius), and a wondrous camp stove** that can cook food fueled by a handful of twigs and charge your iWhateverthefuck too (retails for $250 and was imagined in Brooklyn but made in perhaps the same place children make iThingies).  So, we were unlike any lost flesh-eating land claim whatzit or refugee whoseamajig.  We were still locked into the system in so many ways.

However, it wasn’t for lack of trying to detach.  Winter camping (technically spring but with the snow and ice I give bonus/metal points as winter) separates those who like to camp from those who wish to die from camping.  The air hurts.  A normally steep incline can provide a slick slippery slidely to the death adventure.  Simple trails are snow coated ankle breakers.
It is the time of the hungry ghosts.  The lone wolves.  The rabid bears with glowing eyes. The snow that twinkles and reflects light making the known world – that directly in front a few feet – seem magical but not in a “magic of childhood” way but a Grimm Brothers before they cleaned up their stories to make them “happy” (by 1811 standards which by today’s nneo-Puratanical politburo-correct standards means from XXX 1970s hirsute love to NC17 with just a touch of side boob) kind’a way.  Walking to join the rest of the party, I was unable to set out before nightfall, and cursed the decision wishing that I could have been able to be part of a group to ensure I would find this camping spot, that if something happened I would be recovered and given a Christian burial.  The sound of the snow crunching under my feet, my heavy breath as I strained under the brand new Alpine pack I had yet to read the directions for, and my imagination was all i heard…. except for those trees that clunk together…. and branches groaning…. and the fluttering of a moth.  What is a moth doing out in winter?  There actually was a moth flying about… was that the Mothman?
After a lot of sliding on my ass, I made it to our cavesque campsite that the others had cleared of snice (a mix of snow and ice) and provisioned with beer, vodka, and firewood.  It had taken hours to clear the camp of snice with a machete.  We made merry into the night slipping and sipping and tending the fire.  We were without Mother Signal, the pervasive connectivity to our modern world and had to make due to live in the moment with out broadcast nor ability to “look shit up” the later being hard to live with, even for a moment since my aged and spongiform brain cannot remember who that guy was ….  That guy on the TeeVee show… the one who did that funny thing with his mouth where he made the words in order to communicate a humor of an idea and another idea …
It was to an early hour, exhausted by the lack of connectivity, that I took to “bed” – a mixture of rocks and leafs on a slender line upon where there was no snice, unwrap my bedding, and to sleep to go.
Which lasted until the evil and crepuscular hours of the early morning where the dank lasting darkness gave way to a creeping sickness of morning.  My head was pounding, which is to be expected from a night’s cavort, however, parts of me hurt from the cold that was seeping through the zipper, through every break in the fabric in shocking ways.  My hand had tucked out of the bag by mistake and it almost cost my my fingers.  My hand was as a stone, numb and cold.  The air had become ever colder in the night and the fun bracing chill was replaced by arctic dangers where breathing hurt, the air hurt, the rocks beneath me stuck into my shoulder and also froze the wound.  There was no comfort.  I wrapped up in everything I owned and tossed and turned as the sky turned from gray to that first yellow ray of the sun, but that did not warm our cave.  The snice pile laughed at me.  I hopped over the snice on the ground to a rock set up as a seat next to the long dead campfire and the seemingly lifeless companion who had chosen a spot by the fire but in the night those lights extinguished and he was exposed and covered in snow.  Would we have to bury him here?  His sleeping bag was worse than mine.  He seemed lifeless. 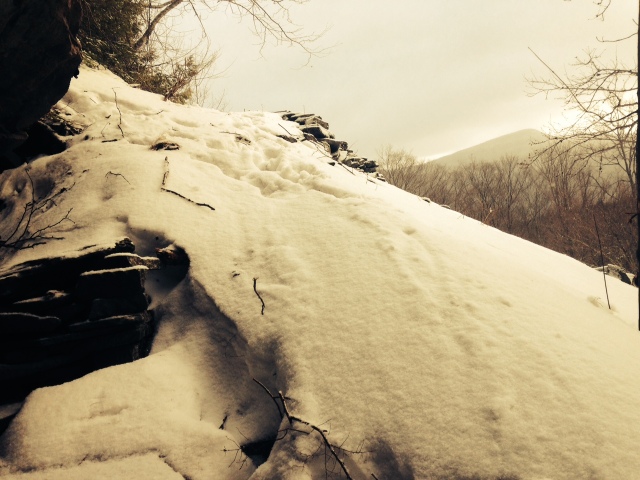 My feet hurt.  My nose hurt.  My fingers hurt.  My soul ached for hot water on demand. My boots laughed at me.  There was no way I would be able to slip them on.  My gloves had been wet the night before.  Even by the fire that night they had frozen into blocks and stuck together.  I hopped in my sleeping bag over the snice to where my Brooklyn Stove sat as some R2 unit or lost piece of equipment from a Moisture Farm and looked to make coffee.  The water was frozen solid.  My fingers stung to be out of my now double sleeping bags even for a moment.  My friends rose with the sound of my stirring.  They were miserable.  I was tossed a lighter, but it was too cold to work or my fingers too numb to operate this simple tool.  Another lighter was tossed to me.  This one had been kept inside the sleeping bag so it worked, yet, even with Brooklyn Stove, it was hard to light up the fire to thaw the water to then make coffee, impossible with frozen fingers to break the twigs small enough to fit in properly, and deleterious to brave the icy cliffs to gather more fuel.

In time, hours actually, we made coffee from frozen water.   We really put the Brooklyn Stove through its paces.  We made bacon sandwiches from a block of frosty bacon and the algific dehydrated bread, and boiled eggs hardened by the weather in water harvested from the snice and turned all this into food, into warm and comforting reminders that we were still yet part of today’s world   Just holding those hot eggs gave me hope.  By then the sun had risen to a respectable zenith and we had moved about making fire in the fire pit, keeping the Brooklyn Stove charging our iThingies and boiling eggs, and moved about enough to warm up, strap on boots, pile up the gear, and pick up the litter from the night before (we weren’t good “neighbears” [if you’re from that region you know what I mean]).  We left the rocky camp and returned to the trail and to the parking lot.
I still hope for The Change.  That time when we can again return to a more balanced world.  I just hope I have a better sleeping bag before that happens.

**The Brooklyn Stove Company did not compensate this author nor does this represent a product review, advertisement, nor field test of this silly yet fun invention.