Wake up Maggie I Think I got Something to Say

The death of the Iron Lady reminds us that the legacy of the 80s may be gray and dying off in body, but in spirit the world created is with us and had not yet reached its final zenith. On both sides of the pond Anglo-American capitalism has prevailed against Frog-and-Cheese socialism, mercantile protectionism, Sharia Theocracy (pending), and of course, communism which has shown itself a dismal failure in so many forms since the cold icy hands of markets and workers and dictatorships of this and that all were mathematically and rationally correct but failed to take into account that human nature is petty, lazy, and selfish and the cool kids will do anything to remain cool, whether buying designer bags and talking about all the right films, or sending you and your lame ass friends to Siberia because you’re all huge dorks with the worst case of nerditis.

If the old SOVIETS has Marx-Engels-Lenin to thank them for Stalin, we have Reaganomics-Thatcherism to thank for our current corporatist leadership where our officials are nothing but spokesmodels for corporations and our progressive forces make concessions and look to squeak out labour rights where once equality existed as the ideal (Yes, I’m talking to you New Labour). Maybe we should have a May Day like celebration every year to celebrate these political contributions of these two administrations and their feisty individuals. Children could sing songs like Re-Ron and we could have Thatcherfest, the first all centrist-right film festival. A drag Thatcher show featuring Heada Lettuce, a Ronald Reagan poetry slam called “There You Go Again,” a Falkland Island War reenactment, a Panamanian food tent, a drugs for guns trade show, and the best part would be that one ticket would get you into all events to freely trade with your friends. Certainly, we’ll have to think about this in the coming weeks as we remember the person that Thatcher was. Who, like Reagan isn’t particularly a horrible person that we see in the likes of so many other politicos but did ugly things to our democracy. It is just unfortunate that these people pushed the agendas they did, moving forward policies that have now mutated and the repercussions of those 80s have yet to be fully felt in their entirety.
Let the dead bury the dead, so they say.
Income inequality is perhaps the greatest legacy of these two figures. Both sides of the pond suffer from class divisions and an inability of the average Yob slob from moving into another class. This is seen as meh for Great Britain, since the place was supposedly the inventor of class divisions and income inequality but seen as a rather new condition of the United States… except for blacks. And Indians. And some Mexicans. And certain Cubans. So, except for certain groups, there has been some level of economic opportunity for a large number of people. Yet, in thirty years, this has vanished. And there seems no reversal of this trend on the horizon. We can squirrel away money into our 401k programmes and hope the market doesn’t tank when we need the money to retire on… We can save in bank accounts and watch as we get pennies on the dollar interest. We can jump into the clusterfuck that is gold and silver investment, hope the market isn’t fixed, hope that the paper tickets we buy are actually backed up by actual gold or silver and that we may redeem that if need be… Or we can buy coins and sift through them for those before a certain age when the medal content is worth more in melt-down value. Like pennies prior to 1982. Or 1965-1987 (approx.) quarters, or nickles from before 1988. That and hording copper fixtures. In boxes. In your room. Next to your pee jars. At least you can use the pee to compost your garden and the metal is an actual real thing you can put your hands upon and, if plumbing fixtures, use to make repairs yourself. 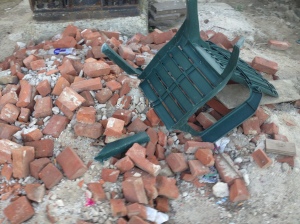 Death will continue to nibble away at that less than greatest generation. But the forces they have unleashed continue to dog us. The children that were spawned in this time are even stranger. In the Americas we have replaced the Neo Con with the Tea Partist, the libertarian, the liberal who protests as the lady doth protest, oh stop horrible corporation, don’t take advantage of traditional land rights of indigenous peoples, not in that way, my entire life savings working for the World Wildlife Foundation is tied up in the stock market, in a 401k and my spread includes you big boy. The fight doesn’t always go to the strongest nor the race to the swiftest but that’s the surest way to place a bet. The epitaph can yet read, Here Lies Maggie Thatcher – Winning.