Where I used to work was a technology company that while large and corporate, thought of itself as a “start up” and with a “start up mentality.” My tasks at this company are something that can best be described as providing documentation on how to use the tools that this company was creating. I would meet with the product team, take notes, meet with documentation (the technical writers as I was creating something more customer-facing and for people with only a baseline technical understanding let alone the capacity for order of operations), I met with various directors as well as passed my work though numerous management layers in my own department. This took time and effort, but the best part was that by the time I had something of a finished work, the product had changed, hotfixes had been applied, and whatever work I had was obsolete. This was an almost weekly occurrence and for a time I thought that this was a Kafkaesque reality show and I wasn’t even the lead role. Then I started to consider, in this INFORMATION AGE, how our knowledge – that is the actual skills and technique over certain tools as well as related information now expires faster than that milk you forgot about and left in the car.
It seems with the rate of change, what we can learn faster – and forget sooner. Perhaps everything we learn can be forgotten more rapidly than before, to the point where we may have reached the tip of knowledge, that high top of the mountain where the Swami sits (wait, is Swami considered racist now?) because whatever question we had at the start of our journey has been discarded and replaced thousands of time before we get to the top.
What did you seek my child?
It doesn’t matter. I had a great idea for a waffle food truck I wanted to pass by your, but that whole food truck thing is over now.
This isn’t just ideas that are replaceable, these are entire skill sets. Know how to program a VCR? Your grandmother may. You can now forget things right away rather than waiting a generation or two. The tools you used last year are now your grandfather’s tools. Often, literally, if your grandfather happens to be rooting around in your trash he may see some use in your universal channel changer thingy.
We life in an age of disposable media and tools and are perfecting the short attention span. Did the reactor tip into the drink, or is online, or what was that new story and did we have to pay attention? As long as Lolicats are up and running, who needs to know beyond the entertainment value of news? It’s just background information. The sort you get naturally by all the advertisements you’re exposed to walking driving to work, or the radio station playing in the Kwikimart’s bathroom. Who uses an OS of twenty years ago? Who remembers how to dial a phone? The shelf life of knowledge is growing shorter and shorter to the point where a book’s publishing process often takes longer than the shelf-life of the information within, whether technical or creative. The saying in university used to be that the institution was a generation behind. It was fun to make fun of out of date text books, presentations, and professors mired in another generation either the hippie-beard type or the suit and tie. Now, universities can only be but behind, even if the copy machine is working feverishly to print tomorrows multi-media powerpoint. These august institutions have by trying to be more and more relevant, tossing out the classics department, dropping language and philosophy and the Liberal Arts, have become more ridiculous in trying to stay up-to-date in a world where information is useless. They’re like the old grandfather trying to be hip and saying “that’s really tits!” when he should be saying “mint” or “rad.”

While the semantic point may be argued that it is information and not knowedge that has become finite in its usefulness to the average person, information as the building blocks of knowledge and knowledge as the structure in which to fit in those little bits breaks down when those little bits are comprised of shit like…. A Master’s Degree in Kinetic Intelligence…. Once given by Syracuse University I believe…. Useless. Now, a generation of anti-traditionalists have said something of this when they created pop culture studies as a discipline and post-modern folks with all their Care Bears as Externalization of Anal Stage Hermeneutics but these people were tossed under the bus years ago. Their replacements are the “I know how to learn” foolios still think we need teach nothings since we will know how to learn what we need. Problem is – there are no longer “things” worth “knowing” and that while “information” may be power the way a flashlight has power, but information is no longer power in the way that a TE-416 Tomahawk Missile can far better light up the sky. And that kind of power is today more often than not in the hands of the stupid.

In all this exchange of information, ebb and flow of knowledge, we eat our way through the world, a China Syndrome, but it is humanity that is sinking itself into the earth deeper and deeper in search of the materials to make our constant improvements and fanatical changes brick and mortar realities. With each new system, we toss an older system, we add another heap of poisonous products to that old dustbin of history (note, they don’t say recycling bin of history) which are not sucked into a machine that blows out bunnies and kitties but are smashed and burned by people to rescue the little parts worthwhile to our industrial masters to reuse. Eight Track tapes, VCRs, ROM, floppies, your mom’s mix tapes, reel to reel players, Boom Boxes, analog TeeVees, those huge stupid 36” TeeVees everyone at in the 1980s, CDs and their players, Sony Walkmans, AOL disks, records, iWhateverthefuck, the Cold War, Institutional Confinement of the Mentally Ill, Willowbrook, Detroit, Youngstown, US Steel, Pentium I, II, II, IV, V processors, PDAs, every day that coffee cup and lid you toss away assured it becomes a unicorn after being removed from the trash can, shoes, tyres, and the list goes on. In my lifetime, I have owned a cell phone from 1999 on. Since that time to today, I have burned through roughly eight. I have owned a computer since 1996 and since that time have crashed or off-lined six computers, smashed perhaps five monitors. Having driven a car since 1991 or so, I have seen the demise of eight cars, counting that for nine of these years I didn’t own a car it’s still 1.3 cars a year – each car needing its own owner’s manuel, its own bits of information, own knowledge of blind spots and ability to perform such-and-such task and what the fuck is a “check engine lite” and why does it always cost $800 to get that light off when a hammer and nail could do the same job? At the rate of 1.3 cars a year, that a huge pile from my current lifetime, and I, strangely, amn’t the lone car owner on this planet.

Even this blog post is bad for the environment. The electrical system has an impact, the computer will soon be added to some pile a Bangladashi child smashes with a hammer and then burns in order to get the lead, cadmium (or is that in our diet milk powder?), and super powers within, and the viewers of this blog also contribute your part, making a contribution to what we call “e-waste” since “toxic pile of shit” can’t be printed since we’re not allowed to say ” shit” and we all know it’s just background toxic shit we’re exposed to all the time. Like the normal dose of radiation we get from the [ozone hole exposed] sun.
Maybe knowing things isn’t such a great idea. For one thing, knowledge and information is bad for the environment. Perhaps our failure in technology, the technobastion of our supposed information economy will be exposed for the
lie it is. the constant life-long-learning, the constant keeping skills up-to-date, the skimming and infotainment, and reduction of information and knowledge to blips on an ever-changing data platform.
We may want to return to stupidity. To owning just a few good books. Maybe just burn all our books and polish the Korbibtorah sitting on the night stand, as humanity did for thousands of years. In light of our complex system of exchanges, supply lines, global networks, and constant updates to these systems vanishing under a bit of water, stupidity may be the new knowledge. Knowing that we can’t learn, that there isn’t anything worth learning, and going back and rescuing those mix tapes from the trash that mom tossed out cause, Joy Division ain’t all that bad.
Perhaps neo-ignorance is good for the environment. 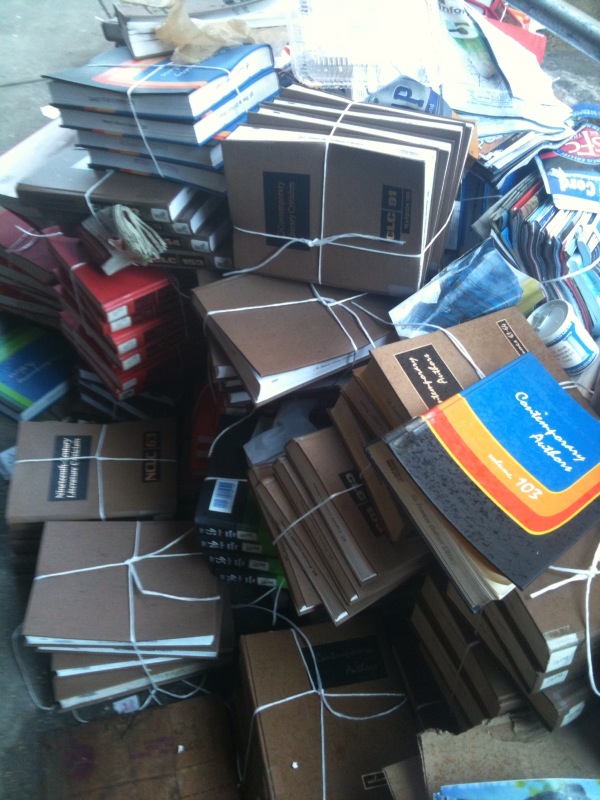 Editor’s Note: This post was lightly edited and somewhat revised in 2014.

4 thoughts on “This Blog Post is Bad for the Environment”