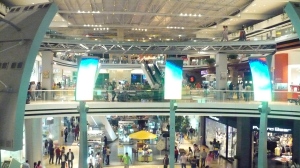 There is nothing more sickening than the mall.  Soul sucking, dead air, the excitement of the market, the freedom of the public square, and the ties of community all flattened into a thin line of pure consumerism.  The worst invention of North America. Having traveled to Guatemala I was surprised by two things.
a) A vampire infestation has made people afraid of the dark (maybe these are drug cartels killing people after dark)
b) There is a North American style mall in Guatemala?
The nation just coming out a post-colonial civil strife and several decades of [American influenced] dictatorship seems to be plunging into the Neo-Colonialism of consumerism.  Maybe this is a good thing. Maybe this is unavoidable as NAFTA et. al. grow and the global-blah-blah makes the TransAmerican Highway just a strip of shit similar to Route 17 in New Jersey…. or all of New Jersey for that matter.
The Oakland Mall, Guatemala’s latest attempt to import North American encapsulates that new invasion, the spread of blue jeans and soft serve ice cream.  These food courts and multiplexes flatten the earth and the international Neo-Colonianists  are intent to shit out as many malls, 7-Elevens, MickyD’s(tm) and factory outlets onto the former jungle until all points on the compass read the same coordinates, the corporations of the North the new invaders creating the city in their image.  These Neo imported ideas are cut and paste from the worst of North American Consumerism (or is it the best we can offer?).  North American road techniques have lead to massive landslides, English farming systems to deforestation and soil erosion, and United States anti-communism to thirty-seven years of civil war, genocide, and destruction of traditional communities, the Oakland Mall not only brings a little part of middle-middle-middle America to the city, it lands like a spaceship complete with a gringo name….

“Oakland Mall”  There aren’t even oaks in this part of the world, let alone enough Zoes, Cloes, Jacobs, and Dantes to populate the food court.  The only mark that this structure is indeed in another country, is that Guatemalans are not just in the stock rooms or waxing the floor, but are everywhere, the armed guards with shotguns at all the doors, and the crushing poverty just a few blocks away.  And this is not your welfare mother’s crushing American Waitingtilltheendofthemonth poverty.  This is shit into a bucket and look for undigested corn poverty that only the third world…. I mean, the red headed stepworld can produce.

Entering the Oakland Mall is like taking a trip … a trip to Super Bizarro World (SBW) that is.  In SBW there are many consumer products to buy, many films that played in the United States six months ago to watch, and lots of armed men.  The only thing better than just a quick visit to the indoor amusements, toy train ferrying children about the massive complex, or light show is visiting while reading Thomas Friedman’s  The World is Flat, a booster for globalization, Walmartization, and Babyboomer N+infinity growth idealism.

The Oakland mall, for Friedman would be a sign that culture is expanding and including more and more people in the benefits of commerse and technology and that any problems – such as the totally unregulated-open-trade-anti-union-free agent-free market of illegal drugs that has caused a low level civil war in Mexico and is spilling into Central America as never before – will “work themselves out” through innovation and market correction.  Which, when “market correction” means solders (uniformed or not) break down your door, rape your children, kill your wife and cut off your hands or sees 2010 Guatemala count 2000 murdered before the year is even at the half way mark, is a little more dirty a concept than how those antique math word problems involving Johnny and Suzy and “X amount” of apples did “market correction.”

While the Flat Earth is indeed occurring when if comes to Burger King, McDonald’s, and malls, this flat earth is not one of more bounty for all but more bounty for a few – Because of overpopulation these few appear to be a growing number, but proportionally to the total population of the world, the have-nots are increasing in waves.

Now, these waves of have-nots may have been given electricity, plastic bags (plastic bags appear to be the national bird in Guatemala), and a place at the petro-chemical table, but their lives are as eroded as the soil and slashed and burned as the [former] jungles.  Wherever there was a city large enough to support a Micky-Ds, there was razor wire on every roof, awning, and scaffold.  A new hunger of boredom, anger, and violence was present as the lower orders toiled as they have for eons for the more powerful.  Indeed the world in these cities was flat if by flat one means several plateaus of different heights and separated by deep valleys.  The upper plateaus held the hotels, the banks, the factories (yes, I know Americans don’t ever see these things any more, but factory towns exist still since little do people know, we’re still in the “industrial age”), high-end stores guarded by armed militias, and gated communities where the middle class could be seen cowering as they counted their flat screen teevees and peeling back the wrappers on their McDonald’s burgers.   The lower plateaus the trash cities and tossed together cement structures passing for houses.

One example of this terraced “flat earth” was the area next to the Oakland Mall.  A short drive down Boulevard Liberacion.  One walled city after another cut out middle class ghettos in a city that appears to be flattening along battle lines rather than in keeping with a positivist “onward and upward” trajectory as drawn by Mr.  Friedman and his ilk.  Shotgun Men guarding McDonald’s, Burger King, every gas station and any shop selling more than dust-covered bags of chips and coke zero, and for gatherings of the middle class, such as a bike race or a Saturday night in Antigua, men with semiautomatic rifles in the van load.  The Flat Earth then, is also armed.

Now, perhaps the response is “well all large cities are like that” which is to a certain extent true.  There is a MacDonald’s in Moscow, Beijing, Paris, etc, etc.  A Staples.  A Best Buy.  A mall.  There is also a growing number of people who fit an entirely new classification as that proposed by Marx (prol or capitalist) or the new American free market agitprops (consumer, client, “Me” or “My” – as in “my documents, my itunes, my….).

The new order is not liner.  The classes are more dynamic as more people move between areas perhaps even in one lifetime yet, this does not mean their material wealth increases since the classes are somewhat economic, somewhat a mentality.  These classes (in no particular order):

The Corporate Class: These are the “real persons” of the corporations.  They are people except they are immortal and exist only on paper unless they are dissolved due to bail outs not arriving or not arriving in time.  They are Walmart, Staples, GM, Xe (formerly Blackwater), but also thousands of other “people” who are not as well-known but otherwise are incorporated.  The corporate class is controlled by the corporate class (actual living beings that eat and poo) however the two aspects (mortal and immortal) are indistinguishable like some perfection of every manga story line between 1983 and 1995.  The corporate class calls the shots, but do not mistake it with “capitalism” since they use every socialist trick in the book to keep the people (do not confuse this with the workers) paying twice – first at the store where they are blown away by the low low price of Chinese child labor, the second where their taxes are used to fund the back office work of the corporation.   Unlike “capitalists” there is no stock in brick and mortar.  No huge factory city.  No smokestacks.  A moving being that can jump on an airplane and set up shop in another country making lead painted Bratz dolls or keggle balls.

The production class: they find the people who make the things – middle managers and often may be confused with “workers” but these slobs don’t actually do anything.  They travel a lot, talk about “forward leaning” open the riot gate in front of the Burger King to let the proto-consumers who work there in (see below).  The production class actually do not make things and buy them only when needed.

The consumer class:  They may have many jobs (from Dr. to sanitation engineer) but it is not their job that positions them but the things they buy.  Some consumers can buy a great deal of things that cost a lot, others a great deal of things that don’t cost a lot. All consumers are united in their ability, need, and drive to consume, and the ones who cannot afford more than a spending spree at the dollar store still think that one day… yes, one day, they will be able to spend and fuck like their larger brothers in arms.

The Hyper Consumers:  These usually have more money, but may not.  Hence, every Ghetto filled with overpriced crap that is used once and tossed away and all those huge Mchouses where FedexUPSUSPS is delivering an endless stream of goods that also… are used once and tossed away/donated to Goodwill.  Hyper consumers move faster than others to buy expensive things they don’t need.  they may spend all their savings on rims for their car rather than spend money on food, but those who shop as Dee Jay’s and those who get the latest gadget from Hemicker Schlemmer for their beach home are cut from the same cloth – no matter what their financial situation/cultrual-meta-identitiy-thingy may be.

The Proto-Consumers:  Homeless.  The destitute.  Migrants.  People who wish one day to be consumers.  This is as close to “poor people” as America gets, yet don’t confuse them with any Marxist “prol” or any romantic “volk” or “the people”.  They are not united.  When vaguely or not so vaguely leftist (Old Fashioned Left c. 1968) gather these people in the room for a “power to the people” session, the majority are there for the teeshirts.  Also, a room full of proto-consumers is not a room of power, it is a room full of unfulfilled desire.  These people are waiting in the wings to spend like their consumer brothers or blossom into hyper consumers.

Then, the final class –

The Designer Class: They make the things, invent the stuff, create models and frameworks.  They write in their spare time for Adbusters and this class… they are freegans, shop at second-hand stores, and generally buy nothing.  Strange they spend all their other time creating puke for others to buy, however, they are the most likely to reuse shopping bags, think green, and not see their connection between their designing a product and the planet killing impact this has on the system.

The design class.  When they travel.  They don’t even know about the Oakland Mall.  They live with indigenous families and talk about the simple people of Guatemala.  If you spend enough, you can buy a remaining part of the not yet Flat Earth, or separate yourself from the otherwise Flat Earth’s hordes through razor wire, high fences and lots of guys with shotguns.

Visiting the Oakland mall takes one not to the foreign land one expected, but to the future of travel.  Where all roads lead to the same place.  Is this a good thing?  It is hard to say.  I guess it depends on what class you belong to, and what’s on sale today. 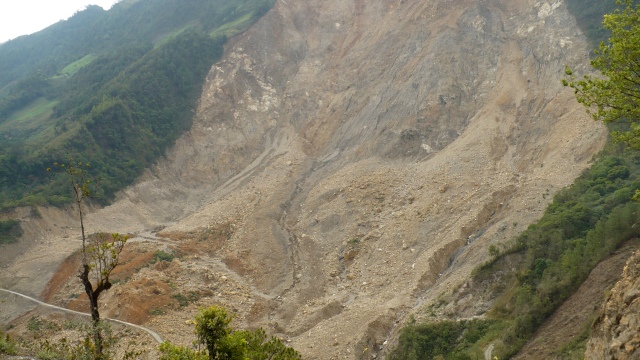