Terminus: A Visit to Underground Atlanta

Atlanta is by no means an ancient city.  Founded initially as Terminus in 1837, the city has grown beyond the mere stockyard it once was as well as shed a few names here and there before settling on its current appellation.  In the ensuing years, Atlanta has been burned once or twice depending on whether you ask a historian or query The Googles.  In this century, the city has grown in size and demographics, and today is known for a number of dubious achievements as well as the Museum of Coke and a Ferris wheel of some sort.  The schools are known for the test cheating scandal that caused a number of accused to go to jail while others fled their posts.  For some reason, there is rampant sex trafficking of minors and the city is known as a destination for many perverts.  Of the history, there are a few memorable moments such as when the city was torched by Sherman and people still remember the child murders of the 1980s.  Perhaps the city is not quite child-friendly.  For adults, there is fun too.  Atlanta was named 2016 Top 25 Murder Capitals of North America.  A high poverty rate that is filtering into the suburbs, and of course the traffic and highways are legendary, up to and including the Great Highway Fire of 2017, which may or may not increase the number of times Atlanta was burned according to The Googles internet searches.  Oh yes… And the 1996 Summer Olympics(TM).   And yes… In the middle of this mess of a city sits Underground Atlanta, a tribute to Urban Renewal and the intricacies of development.

When I visited Underground Atlanta, it was a hot summer, and I was in the city for work.  I selected a hotel that was in the center of the city, hoping to learn more about Atlanta and enjoy whatever the area offered.  One landmark next to the hotel was Underground Atlanta.  Since I was busy, I didn’t do research to find out more.  After all, this wasn’t some family vacation but a work trip.  As in other areas I have visited for work, I just hoped to grab a pint or five and perhaps chat with a few locals.  What I didn’t expect when the taxi dropped me off was that the hotel, while stately and certainly not a budget joint, was dead center of all of our nation’s social and economic issues.  Junkies lined up across the street standing, or hovering I should say, in front of abandoned nail/hair/tattoo salons, dollar shoppes, and vacant commercial spaces the architecture of which can be described as Late American Impending Collapse.  “You are really staying here?” the cabbie asked me, knowing perhaps the Yelp reviews for the area were bad.

Having lived in Brooklyn’s [most vibrant and up-and-coming] neighbors and having traveled many areas of World Three and sketchy janky areas of World Two, I am not afraid of a few raving lunatics, vagrants, or walking several blocks in the hot sun being followed by some creep.  I refused the hotel shuttle service that took one to the center of Atlanta where there were fine restaurants such as TwinHootersPeaks, McEverygoddamnfakeirishpub, and Tad’s Convention Center & Divorced Dad Steakhouse IV.  Rather, I walked to find something to eat.  I cannot remember where I ate it was so memorable, but I think it was Mexicanish food. I am sure there are great eateries, but it’s like owning that second sock to a pair.  If you don’t have it when you need it, the thing may as well not exist. 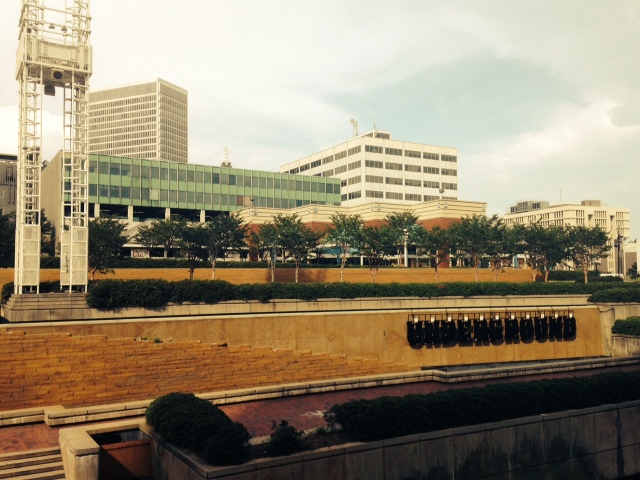 It was blindingly hot, and the streets were silent of pedestrians as everyone drives in Atlanta.  On the way back to the hotel, I decided to check out Underground Atlanta. If one were to live in London, Paris, Moscow, or many other locations where human habitation has been on a longer-term scale, it is not unusual to see the ruins or chunks of past eras and civilizations such as York or Paris, or Rome where excavations are preserved, and one can go down a staircase and travel in time to a world buried by centuries of development.  The earthen mounds and ring forts gave way to temples, and marble tiled floors, those, in turn, became cities, and glass boxes large and small replace the older edifices or blanket the fields in sprawling splendor, and by chance, you can see them for a price. I believe that was the idea when Underground Atlanta was first built in 1967,  just a few years before this nation put a man on the moon and a few years after black people were legally allowed to drink from any water fountain they choose.  Walking down the stairs to the Underground does take one back.  Back to the years of Urban Renewal when historic structures were toppled to make way for housing projects and highways.  A return to gentler days when drugs were openly shared and sold on the street.  The days when malls were replacing the main street, and the food court first became a thing. 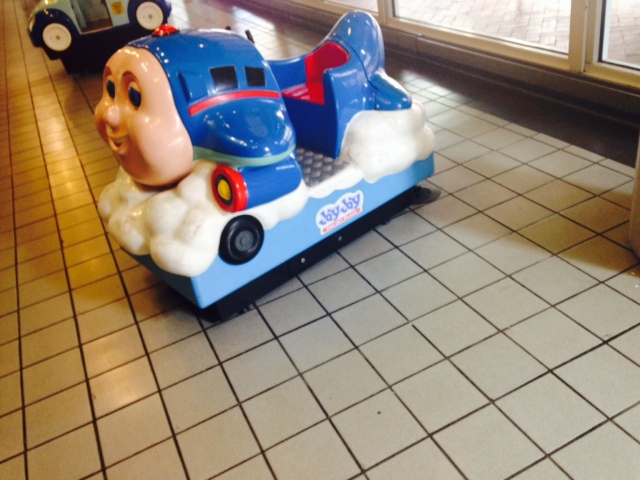 Underground Atlanta is not a nod to the Underground Railroad but to the legacy of burying a commercial road and the contemporary attempt to drop a suburban mall smack in the middle of the city.  The space for the Underground had once been railroad yard for years that in time were was hemmed in by post-Reconstruction buildings and the street level rose when folks decided they didn’t want to interact with the rails anymore.  In time, the street itself was raised and covered the tracks.  The Underground was a subway of sorts at least for freight, and the second floors of the buildings served as the first floor for customers and clients.  Below, on the former street level, was storerooms, gambling and drinking dens, and all manner of Southern Dickensian goings ons that festered for a while.  After the WWII, cities started their slow progression to death, and southern cities began their own migration as people escaped desegregation, air conditioning allowed for taller buildings and a new industrialism, and the car gave ordinary people the ability to get stuck in traffic for hours a day in total comfort.  The county of Atlanta was the only one in Georgia where one could purchase and consume mixed alcoholic beverages.  Yes, while your mustached Brooklyn bartender may pour you a Mint Joule while Old Kentucky plays on a retro speaker all lit by Edison bulbs, the Old South is more corn whiskey drank out of a tin cup than it is a fine mixture of spirits and twist of petunias.

While the Underground sprung to life for a few years and enjoyed some commercial success, after its peek in 1972 the quality of life started to decline in part due to the crime waves rocking the city and also that other counties in Georgia allowed for the consumption of mixed spirits and without the “jacket and tie” requirement Atlanta had in place and the danger to persons and property enjoyed by the newly desegregated city.  By 1980 the Underground was again buried or at least the doors were locked, and the keys tossed away.  The area languished in ruin, and several of the historic buildings burned to the ground due to activities of the vagrants by mistake or intentionally as each case will have to be individually determined by future historians.  However, where there is ruin, there is a rebirth.  A new dawn for the city emerged with a push to host the Summer Olympics, and by 1996 the Underground was once again a destination for shopping, dining, and attempting to find your car in the series of cavernous garages built to allow suburbanites the ability to avoid the MARTA at all costs.

Today the caverns for cars are more-or-less full.  The hallmarks of the 1980s rebuild as well as architectural devices used by builders in the 1990s are evident.  The entire space from above to below ground had those positive, happy elements of design – open concept, light, happy colours that look like the waiting room where mum and da take you to tell you Fido was hit by a car or one or both of them have cancer.  With the modern lines there is an ease of upkeeps so there isn’t a high cost to maintain – a need to employ people.  As with other structures built during that era, these happy places don’t gather a patina with age nor become more stately with a layer of dust.  No, these places don’t become grand with age, they get a lot of smudged glass, out-of-date and stupid shitty public art, missing ceiling tiles, or how did that Pepsi can get up there and will anyone ever remove it? 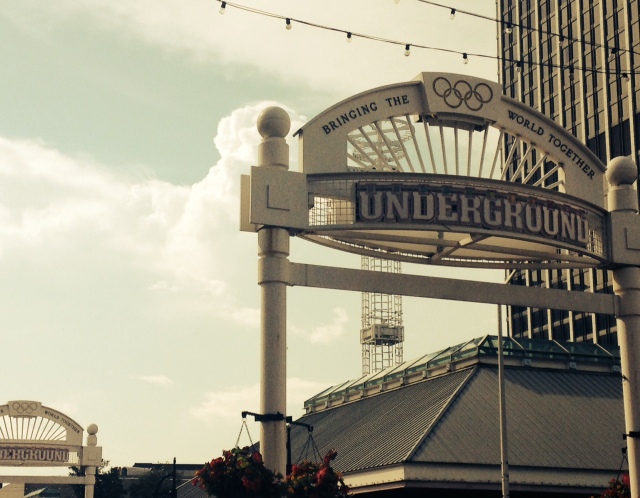 Most of the shops open today are of the sort that is inexplicable in their conception and ability to operate with a financial viability.  There was no open sit down restaurants remaining and no bar culture to be had outside of drinking a beer in a paper bag and hoping the mall cops didn’t do their job enforcing. Of the famous gas lamps, a few seemed as if they could be pressed into operation, but for the most part, the area was dimly lit and lacking the charm of any kind.  My time spent at the Underground ended when I saw police gathering around some homeless gentleman, and I returned to the safety and boredom of my hotel.  I have since learned that a Dead Mall Company has purchased the are for re-re-re-redevelopment and plans to turn the Underground into a high-end something with condos, inexplicable brick and mortar shops, and the sort of energy that has made malls across this nation into what they are today.  Perhaps in the end, we should will Mr. Sir Dr. General Sherman back into existence so he can restore the area to its historic burned down glory, marking the seventh or eight times Atlanta is burned down, depending on if you ask a child raised only with the Internet and Betsy Devos as Secretary of Education, or talk to a historian.

[Editor Note: This is a revisit to an old post based on notes thought lost to time and space]