Born on The Bayou

So it is that the Buffalo Bayou is that river that runs through it, and the “it” is Houston, Texas.  The Bayou suffered the fate of so many waterways in this nation.  It brought commerce, development, armies, and settlers at first and people built where it was safe to build and generally avoided the flood areas of where in the flat hard dirt land there were many.  Then, sometime in the history of the technologists and designers, the common idea was to second-guess Creation and move, dig, rend, and asunder (not sure I used that word correctly), and recreate the waterway in the image of Man.  Usually Eisenhower.  Strangely enough.

So it was that during the time of the highways of moving entire mountains, the Bayou looked like just another disobedient ditch that needed moving, shaping, and of course, cement.  This happened to the horror of several concerned citizens who banded together to fight the cementing over of the bayou but it was not until many years later that the project of reclamation finally started to gain traction.  In time, some of the cement was rolled back, some of the bulldozed areas replanted with native plants.

Every city has a favorite river to dump our bounty of civilization and wonders of technology that have past their de rigueur Born On Date.  So amazing that while we can link molecules together, give sheep jellyfish genes, we still dispose of a spent tools inactive and radioactive the same way a smart ape eating ants from a mount carefully gets rid of their “eatin’ stick.”  By tossing it aside.

People, humans that is, have a instinctual drive to organize their lives along some important water system.  Since the first civilization arose for Mankind some 5773-20,000 years ago (depending your interpretation of scripture, various skulls, jaw bones, and links to dubious articles on Facebook) we have been having a relationship with some important waterway.  This relationship is that we find a wonderful fork in a pristine river, a lake deep and blue, a set of tributaries important to a diverse set of species both flora and fauna, and we hover over it collectively, and as one organism squeeze out a continuous emission of floaters, sinkers, and just plain spray.

This isn’t just the humors that flow from our bodies we toss into the drink, this is our dinner scraps, soaps and fragrances, car parts, spent toys and games, deflated Patriot footballs, bodies of sexual rivals, and all manner of chemicals including fluoride… except that last one is supposed to be good for us.  The water is an instinctual draw to our Jungian Ubermassweldinstein need to toss away those spent items, seconded, this blogger thinks, to our Freudian attraction to cliffs.

It would be a wonder, then, to have a willing subject, given them an armload of baby napkins, Big Gulp cups and other refuse from the car and a package of chicken legs right on the expiration date and set them between a cliff and a raging creek to see what is the true human nature – or is it always a choice? – between tossing the crap into the waters or flinging them off a cliff.  Ask yourself.  Water or cliff?  I will go that the majority of us choose water.  Or at least by the look of most waterways, especially those in populated areas, we choose water as our vessel for all we refuse. 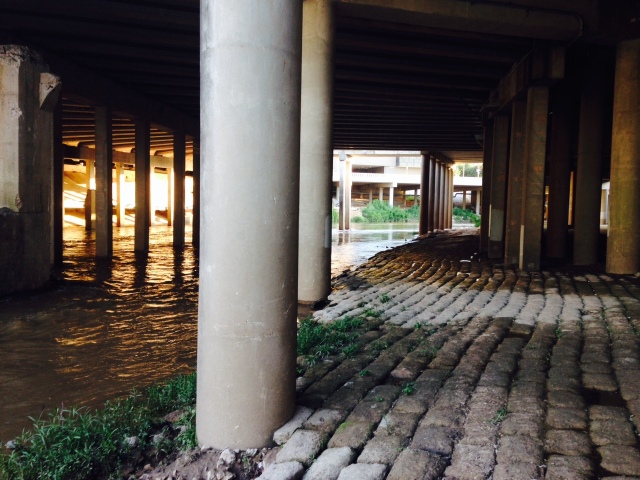 That, and the nature of water ensures that the shit we spread about falls into our storm drains to be sent to the many creeks, to the river, to the ocean, and to the huge trash tip out in the ocean.
Today the Buffalo Bayou still is part of a fight to reclaim.  Sections still languish under cement panels while there is still much to be seen floating on the top of the waters.  Cups, tyres, all manner of containers… the strangest is the water bottles.  So puzzling we drink fresh water out of containers we then dump… into the fresh water.

While there was a section that was hit hard and damaged by the storms of 2015, and some of the area next to the downtown is under construction and maybe because of this most fear to tread beyond a certain point, there is currently a build up of derelicts, homeless, and a vague smell of something illegal beyond the aquarium.  Nevertheless, this growing parkway is a fine example of city’s people taking back the potential of this space, the history, and working with nature to fit it into the city rather than charging against Her. 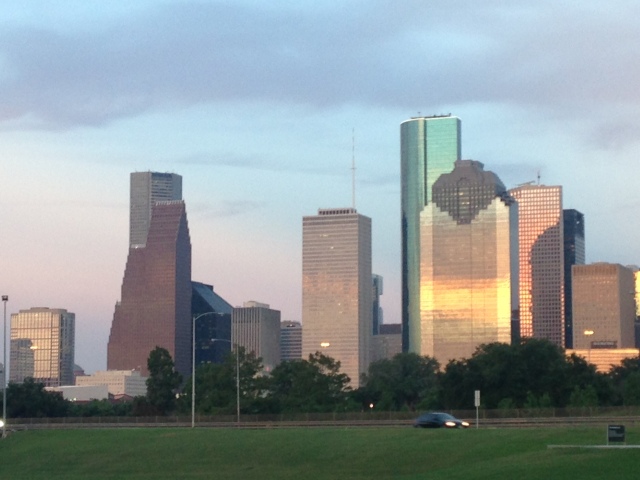 The park area provides a smart pathway with many beautifully designed bridges gives so many new trails for biking, running, or walking away from the ever present traffic of Houston where cycling and communism are still seen as being one and the same.  The “bike lane” from where I was staying on Upper Kirby to the park was but two or three blocks… while the rest was a speedway of death and White Bicycles.  Within the park there is safety, special trails for runners, and points to stop and take in the view with pavilions, water fountains, and a space to sit and rest.

What is taking shape in Houston has a lot of potential if these groups, citizens, private and public property owners can continue to move in the same direction, continue to push the green space up and down the bayou.  There has been so much damage done to this area of the world.  However, more are coming to the common cause to protect, preserve, and replant, since… what was here was created by the most important builder of them all, The Creator…. or 400 billion years of random chemical and biological events.  Take your pick as to motivation.  The outcome is something we all can enjoy.

Editor’s Note: Some words were made up for this post and do not exist in the OED.