Nothing can make one more certain of the anthropocolypse than being at a convention center. Or is that, nothing can make one pray more reverently for an End of The World As We Know it (EOTWAWKI) than being stranded inside a convention center as thousands of people slap backs and chase down little chubby plastic bottles of water which contain but a sip or two but have upon them the branding for the gathering or whatever sponsor had unloaded piles of cash in order to be represented on banners, coffee cups, stand up signs that say “Room 2003 This Way” and whatever else of material culture may be so produced in order to be then tossed away.

Of the piles of shit being set up and then after the weekend convention hauled into trash compactors and various “resource rehabilitation camps” (FKA the City Dump), there is of course the absolute horse water being sprayed at the crowds by various speakers as so many garden hoses turned on the population. A convention, in the mind of this blogger, is rather like a Bosch painting brought to life… Except imagine all those little wee beasties carrying bottles of chubby water and programes and clustering about the bathrooms wondering aloud should we do the 4 o’clock or skip that and listen to the closing remarks and perhaps there are not so many sexual innuendos and bird-monsters with demon nuns up their butts, but perhaps there are…. 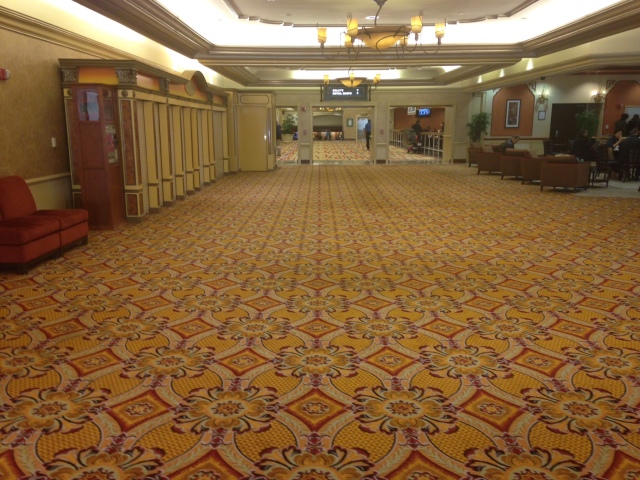 The Love Child of the exhibition hall (think Albert Hall, The White City of Chicago, Crystal Palace, &c.), the convention center is seen by many of today’s Urban Planners as the cornerstone of the New American City… if one means take down the limestone Beaux Arts centers of civilization and push aside any semblance of a street system and replace it with a huge glass box surrounded by parking lots, ugly modern corporate sculpture, and restaurants the like of which are found in the world’s best mall’s food courts and that serve, for only five dollars, drinks where a major part of their flavour comes from carefully prepared corn syrup and finest laboratory odors to provide the imbiber the most extreme visions of lonelytude. The convention center sits on or about most of the major and many of the minor American Cities. They are so ubiquitous as to defy explanation as to how market forces has not seen a collapse in the need for so many half-empty inflated caverns of glass and tacky gleaming turdatious finery as today dot the landscape. These huge behemoths also have their smaller hotel versions, too. Minor convention centers where only a few hundred can be packed in rather than the thousands. They still have the awful drinks and food like their big sisters, that is not a negotiable feature. While it is understandable why the City Mothers and Fathers can assume a convention center may bring new life into their decaying urban center, it is hard to imagine how much bull shit is said in this world that maintains a steady stream of use. Has our age of information and knowledge upped the need for these halls? I understand the car shows, the boat shows, the gun shows, the Starving Artist Everything Must Go One Day Only(tm) shows, but what are people talking about, who invited them, what are we learning…… What are we saying that requires such large fantastic Deathstaresque mega-structures to set down as space ships in and about our natural environment? 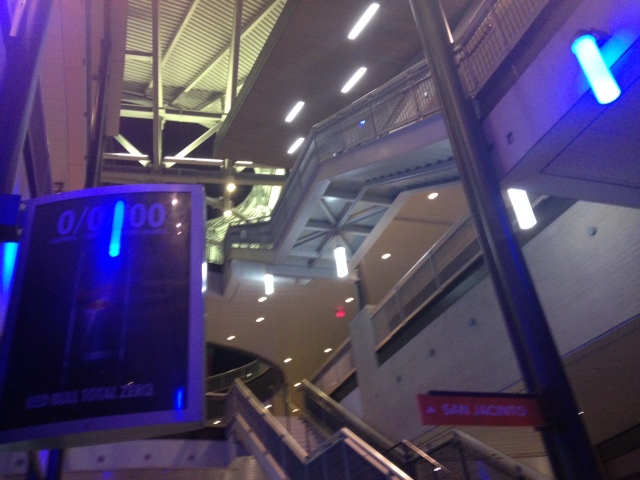 Perhaps I am going too far. When I get to go to a convention center, it means I got out of the office for this, and that is important. I get to travel, which is great. This time I got to travel to [Redacted] that was also a treat after having spend so many weeks in the middle sections of this Great Nation it was nice to be somewhere warm and close to the water. Because I was working at [xxxxxxxx] I did not have to attend any of the various lectures, listen to the keynote speaker “set the charge,” yaaaaayyyyaaaaayyyyaaa whoooo whooooo afterwards, or have a series of bad gastronomic incidents mitigated only the the pristine hygiene of the various and sundry marble fixtures of the necessariumi and that Jerry from accounting wasn’t around to see this. Nor did I have to attend any workgroups, series, conversations, meetings, lectures, speaker’s corners, reader’s corners, coffee klaches, meet-n-greets, round robins, fish bowls, or soft trades. I had to stay active all day, but the people I met were nice. While I had some good conversations, I was still baffled as to why these huge events still exist. To what end to they serve?

Of the many centres I have been to, the Gaylord Opryland Resort and Conference Centre is by far the strangest. Truly a must-see for any student of New Urbanism, the Built Environment, Material Culture, Cultural Studies (AKA Cultstud), or the coming Zombie Apocalypse. The footprint is that of a small city to itself. Inside is another world, a glass atrium, or series of huge pods, sort of like in those films about intergalactic travel or rich people who have abandoned Earth and indeed perhaps the Gaylord is built for those escaping Earth. Inside these huge chambers is an imagined gentile village, a series of houses reminiscent of the Deep South, the gentle Antebellum houses of orderly social stations and honest labour and strong mint juleps. Winding through these houses is a stream and one can take a ride aboard a boat to tour this Off World community as one can enter any one of the houses since they are restaurants, shopes, and taverns. Unlike other convention centers, I have to admit that the food and beverages were consumable, and there was even a very good chop house. As all things these days are chains, there is another, smaller Gaylord just outside of Alexandria, Virginia. This one again has small houses, but fewer than that of Opryland. A pond with dancing waters and a nightly light show replaced the larger aquatic environment but it was clear that this was another world cut off from the one you knew before.

The interesting thing about the Gaylord outside of Alexandria is that it, and the surrounding hotels, parking lots, boat landings, shopping, eateries, had been build in the past five or so years having replaced several fields and groves of poplars now entirely transformed into this strange semblance of a city that is so not a city in many subtle ways that are perhaps lost on most average perambulators but which I can assume the more sensitive folks could at least say that the area has a Pod Person feel about it, a Stepford Wives look, and a Twin Peaks undertone.

While there is teleconferencing and iDevices galore, it does not appear as if Conventioning is going anywhere from the American social or physical environment. We are indeed social creatures, and require some contact and as the exhibition halls of old were required by Empire so too we need these social halls and multitude of gatherings. Plus, it’s nice to get out of the office once in a while and get loaded and dirty with people you will not see ever again, until next year’s convention.