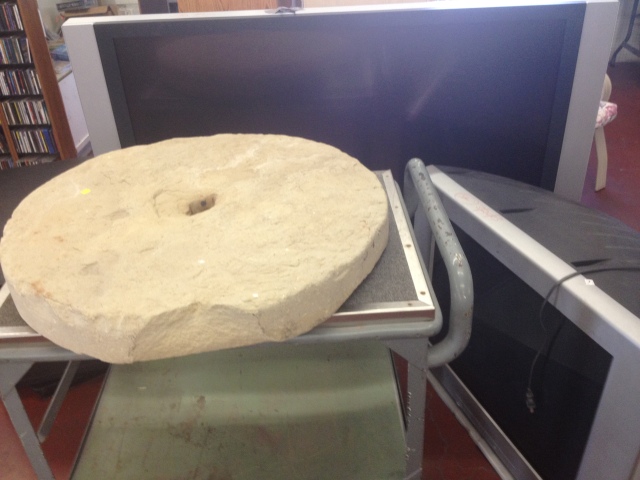 There is a great deal on TeeVee these days. There is never a shortage for hot topics these long and boiling days of summertide. There are the things far off, those things that we may know because we delve and search for news, we want to “be informed” and “know what’s going on in the world.” However, even reading The Nation, The Atlantic, or other sources where “The” creates the illusion of a proper source and exclusive club, these events do not really enter our lives in a way we directly can see and smell. The tear gas and vomit from the riots and mayhem in parts of the world that seem to export inexpensive consumer goods and news of mayhem. The far away is simple to tune out. Then there are those things we are told are part of our lives, local shootings, domestic spying, drone strikes on US citizens, Shark Week, things that are real, impact our standing as citizens and put holes in our front lawns. Yet, much of this remains metaphysical. The thing that happens on the glass of the TeeVee, only “real” when we are watching the TeeVee news or reading [your news source here]. We may get worked up, yell, chant, pee when we see the footage of the cop shooting the doggie, learn who voted/blocked the vote of what, the latest local, sexual, or financial scandal. But, turn off whatever device we are using, or for the elderly, put down the paper, and all is a blur and distant heat lightening.
Then there are those things that we come most in to contact with, the hard and true edges of human life, the hot, the cold, the smell of the boiled dinner in front of us, the price of gas at the pump, the settings on the AC unit, the condition of our car, house, apartment, or shoes, and sundry other direct experiences of the point that pricks our attention. This is no longer Camus, Kafka, and Orwell. This we can understand. It is hardwired into us by millions or years/seven thousand years of development/Providence.

These spheres move about, one nesting in another, or broadcast in a number of ways we can consume or avoid. We draw in and out of all these realms, stand in front of a TeeVee playing Fox News in the coffee shop, maybe pass CNN in the airport terminal F, log into our Times online account. We search our simple narratives, complex ones, invented ones in order to rest our minds. All contact with those that seem unconnected to our doors slamming and hot soup burning existence are so distant anyway. That all these things are connected, interrelated, are part of a whole, exist at once in all derivative meanings, but our man-ape-mind cannot fully Know this totality, so we must reject that sight of everything at all levels from the particulates of dust kicked up by tanks, to electrons blinking out our metadata and the deafening noise of the trees growing yet in the forest that will soon be cut down and formed into paper in order to print our your arrest warrant. So the man-ape carves our whatever man-ape can, assigns the remainder to a spiritual being, or number theory, or that bottle of Nyquil, and moves on with breathing and suffering the heat of the summer. We are not yet that space-god-child-star thingy in the film 2001, we are not yet enlightened, we have not yet attended enough therapy, motivational speaking tours, popped enough Acid, downed enough pills, read enough e.e.cumming, nor actually finished all the articles in The Economist enough to know how things fit together, or our place in this larger whole that seems, by all accounts, to be getting larger and larger while we get smaller and smaller. As we shrink, we turn to small things, nurture small conversations about small issues.

The garden is growing and we are fighting the squash bugs.
Obama was followed in a department store 35 years ago, and now he follows all of us everywhere.
I canned several jars of blueberries and will have to redo my work since I got the recipe wrong.
Forty people were killed in Iraq by a number of people for numerous reasons.
A train filled with trash crashed and blocked commuters.
Someone with a name I cannot pronounce got killed by a sniper in Alepo.
Obie Trice finally released an album in 2012. 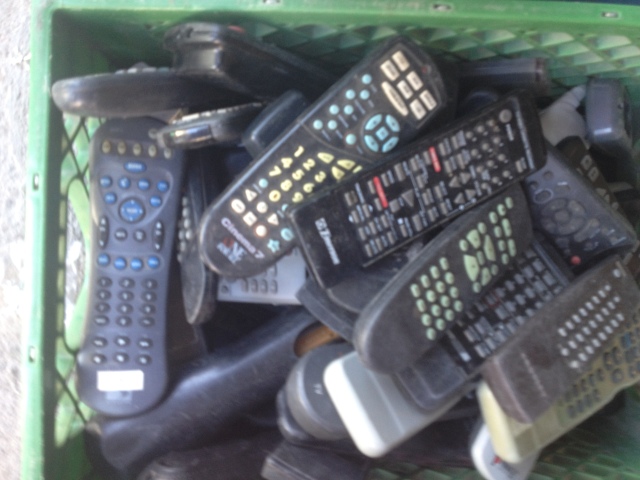 Some cry “conflagration” others “progress” and yet others step back and drop out, but not in those old 1960s ways. We must block this stream of court tv, current tv, liveblogging, tweeting, and podcasts just to have the privilege of taking a dump and not feeling compelled to check our email in order to see if the secret message had come through that would make this whole mess make sense. The Doomsters look to this or that sign, each occurrence that seems to mark a “tipping point” passes until the next one tips, and doven in place looking for the mystical moment we can shed this world and start making our own by hand, or oxen, or raiding the strategic Pez reserves we were certain existed when we were children. Something seems to be happening, but perhaps it is yet too large for any of us to apprehend. That world of Lovecraft, too terrible for us to see, a world that returns the favor by weightlessly passing through us, as interested in our daily machinations as those Elder Gods of the Devon people, the Ice Giants of the Celtics, or Mother Nature as she stretches out and turns over, to fire or ice, or whatever may suit the bedding we have disturbed. There is indeed something up. Something new. This, can we even call it a “this” as a thing, or is it an occurrence? This Thingoccurance may be here in progress. No need to search for signs. Yet, while this Thingoccurance rages on (or has yet to begin) not even the most astute of us, not even Noam Chomsky or Silvia Plath can describe this in order that we may form this new reality in our mind’s eye, as when someone called out “that cloud looks like a pirate,” and we can never again see this blob as we had before, a mass of drifting atmosphere and those materials called forth by Persephone.
As we were picking blueberries for my upcoming failed jam… that will have to be totally remade tomorrow… my friend mentioned s/he/it was watching a TeeVee progrramme called “Naked and Afraid.” In the hot sun it seemed like a fitting topic. Apparently, as I am told, two people, a man and a woman, are dropped off in a location, with nothing on, and they each have brought one thing, an item of value [not feminine hygiene products because we don’t really discuss women], and they are to survive for a certain amount of time, maybe to win something, like a new car. They make food, hunt, gather, fish, perhaps make clothes, so that they may demonstrate their survival skills, and we may watch to see their butts – since cock and puss are yet on the list of seven dirty words and two body parts unfit for TeeVee – and like other shows we can see them overcome challenges or totally, wonderfully, fail. And we can enjoy that. 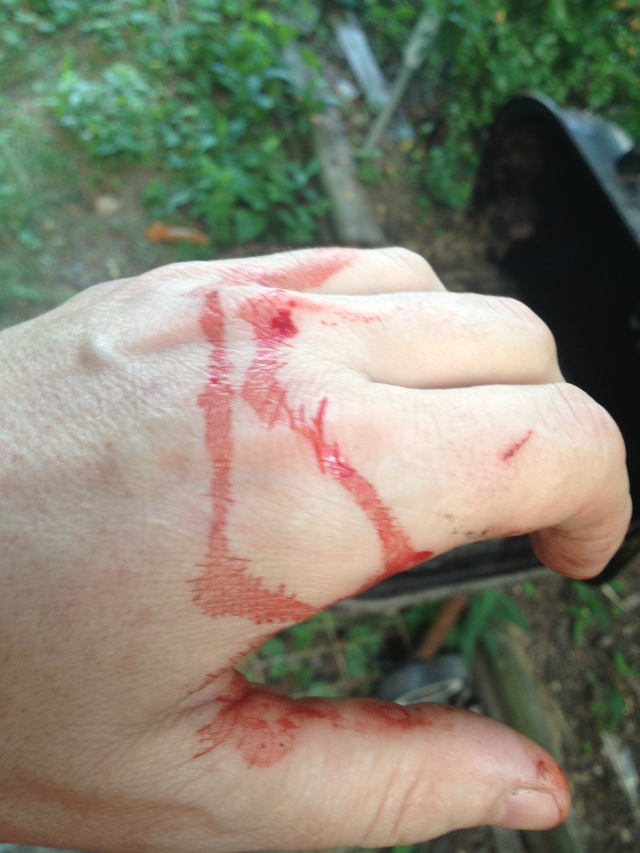 It seems like an interesting show. I may actually watch it. However, it also seems appropriate for where we are as a nation, obsessed with competition, unpleasantly unprepared for the natural world, involved so intently with our day-to-day existence that we shy away from thinking of those frightening things we cannot control, increasingly naked in front of all our facebook, twitter, google, phone company records meta-data, and afraid of terror, not winning, and being slightly fat. We need an escape from so many things, we need to cover ourselves as after The Fall seeing how naked we are. We fear.
The government that spies on us and tells us “not to worry.”
The privatization of the war machine at the expense of those who serve in the armed forces.
Our interest rates of our savings not increasing as fast as that same interest rate on our credit cards, the cost of goods compared with our salary grows faster than our appetite for minute rice, or understanding why it is so blessed hot one moment or flooding the next.
We returned to picking in the late afternoon heat, the blueberries warm and squishy, strands and snips of conversation waving their way through the bushes as other pickers chattered and harvested. So, where are these people dropped off? Different places. Jungle. Islands. Savannah. How do they get away showing naked people? You can show butts these days, lots of butts. One group found like underwear and a sundress on the beach, so they had clothes.
Ah, me thinkith, just like the cave men and women in my old school books.
Small close things are wondrous to us, and we again become children in the face of the world. Those close things we care about turn us into those same children who lived under the vagarious totalitarian regimes we were raised to fear. Those citizens of SOVIET had nothing to fear as long as they did nothing wrong. They stood naked and afraid in front of their Motherland/Fatherland. They did not think or talk about those drones killing goats and their minder. Those laws and amendments slipped into various bills in order to turn the wonders of communication technology into powerful tools of control maintained by a shadow government. Those unsafe thoughts. It is no wonder we increasingly turn to the simplicity of live on a semi-scripted set of “reality” shows as the voice of America. Read us again that bedtime story. The one you read every night to us. We enjoy it because we know it so well, we can drift off to sleep telling it to ourselves. 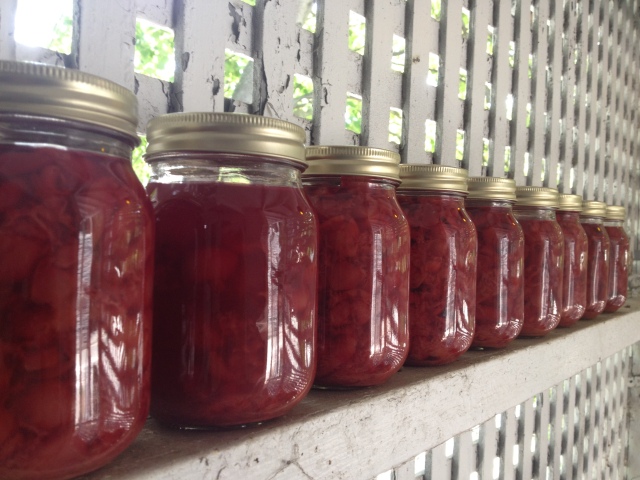