If there is ever a footnote written about Schwerpunkt, Beat Films, or the Indie Programs, this film would be the road trip that started it all, or ended it all, depending on which side of the fence  you live.  As in many other Schwerpunkt films, the best elements, the northern lights, eating shellfish from a polluted beach and wondering if we were going to die (except for Trevor, he asked if he could have the Jeep when we were dead), the lady who almost drove us off the road to ask, “why the battle flag?”  “Well, it was 5 bucks, the Canadian one was 40….” the story of the smile in the closet that seemed so funny as the fire was bright but, deep in the cold darkness of the night crept into the thoughts of campers sleeping on an abandoned section of the highway, did not make it into the film.  As in the past summers, the days were often rainy and the nights cold.  For the 1981 CJ7, dubbed Nelly Bell, the 55 MPH was enough to pull our crew through hundreds of miles of dirt road, off roading in dumps and mine craters rather than splashing through pristine wilderness.  In a way the torn landscape, burned forests, clear-cut wilderness, and at the end of this road a trash heap infested with bears…. is our current Americas.  This is our motorcycle diaries… Except that we did not write a book… and have not participated in a revolution.  And with any luck no one of us will hunt down and have the hands cut off the others…..  We did learn that a Jeep comfortably sleeps none.  I still have part of the stick shift inside me somewhere…..

Black Swan is as it sounds.  An unexpected event.  An answer to 9/11, an event I watched personally.  I asked a simple question of this trip to the wilds.  What if all the famous people in the United States were killed? 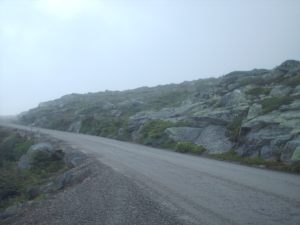 What if we lost our entertainment not just for a day, but forever – supposing that some kind of strike obliterated the Oscar ™ night and rid… ahem… robbed us of the rich and famous. This film also was perhaps my way of working though that event in my mind, as well as a relationship that was born days after that event.  The final cut presented is rough since it had to be compressed for the youtube file size which reduced time and quality of an image already created with sub-par cameras.  This is that same MP4. The music is drawn from a few free share sources (the “internationale” being Soviet and without copyright since it belongs to all of us… common ownership, some idea, sounds “communist”) and the cameras were junk from the Indie Programs.   The major theme music is Swan Lake, a reference to the Prague Spring when the radio station was captured by the Soviets and the station played Swan Lake for perhaps four days straight (I cannot find an online citation to this but believe I heard it years ago in a documentary – anyway, the idea stuck in my head).

Whatever it may mean psychologically, for Sovietologists, to Japanese, as dumb road trip film, for the History of the Indie Programs,  Black Swan is a rare work and seldom viewed except by our closest fans.  The Schwerpunkt team is talking about a remake.  Getting the old team together.  It’s been three years.  Thats twenty-one years, in dog years.  We want to return to those hills aboard Nelly Bell who is at this moment with a damaged gas tank and needs her body attached to the frame, reuniting the crew who for have traveled so far, each in their own ways and may not have changed the world but the world has changed them.  Actually, no it hasn’t.