The People’s Republik of Katskill 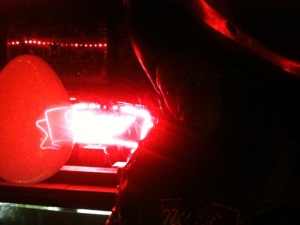 However, Sputnik Alley’s shops are usually closed. The ones that are open are of the “how the hell do they make money – are they a front for drugs?” variety with a trophy company-cum-sunglasses-n-plaster-art, shoe repair-cum-laundry soap-cum-ladies handbags, not one but two never-open thrift stores, perhaps the creepiest book store ever (oh wait, it’s gone), a rug company where you can also get a plaster saint (unpainted) or 1980s “new wave” art, more plaster things this time cats and vases, and the largest polyester trading company this side of the Hudso… I mean Buford River. There are fewer options every day, as stores twinkle out – the population having “taken a break” according to the mayor. We’re talking about a village where you can’t get a cup of coffee on the weekend since the cafe (that closes at 2:30 PM on weekdays) is never open and the “cafe” (that’s what it’s called) owners are offended if you enter for a “to go” cup of joe cause, “This is a fucking restaurant, we’re not going to drop everything for one cup of coffee.” [Actual quote]

Increasingly, a Twin Peaks atmosphere has rolled over what is perhaps the most charming and useful location, a focal point of river, creek, and mountain activity and historic launching point for said environs and not just an historic point on… Buford River but one that should draw boaters, weekenders, and sundry others. The nearby village of … Woodsawyer’s Burg and City of Buford River are doing much better and seem to be actually growing slowly in their ability to attract cityfolk and needed dollars. This seems, then, not to be an issue of … leadership or the lack of it?

There is the leadership, the townies not drug addicted become the mayors and officials of every town, and the …. poor people. The locals of this burg have been plagued by an increase of lower-income social-emotional activity that disturbs daily life and impacts the quality of life of the few, the educated, the middle class of Sputnik Alley. It appears that vandalism in Sputnik Alley has increased. The police – who at this time appear to outnumber the full time residents – are no longer leaving their station, redubbed Chief Domestic All Rise Local In Nottingham Garrison and local Ticket Emporium, and due to this and other concerns, sundry locals are coming out of their shelters, caves, and of course the rail road bridge next to the aptly named Hobowl bowling center (not that any of this is real or exists) to make their presence known on Sputnik Alley and other side streets. So, here it is, the citizens are plagues by a reduction in the quality of life, especially when it comes to damage to property. When one citizen (not this one)complained to the local paper, the editors – ahem, the owners – of said paper quashed the story. As a matter of fact, it is reported, that the business association said they did not want the paper to run the story either since they did not feel this issue needed to be dealt with in the papers. For a hive of Republicans, how Soviet. News blackouts? Controlled message? Ah, this writer has outrage fatigue. To hell with structured thought. How about an old fashioned, fuck our leaders.

Schwerpunkt International is proposing a launch of the People’s Republik of Katskill. Why not? The people need to start kicking back and take our education and shove it up our metaphorical asses and roll up the sleeves and get into the mud and start – metaphorically – bashing the faces of the powers that be. People’s Republik of Katskill, here we are.