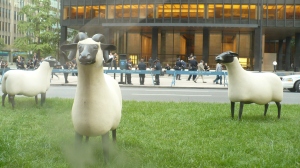 Build a Time Machine to the past, where we can get oil for free

Sad but true, that was it for the monsoon seasonsummer.  Now, we discuss climate change at the G20… G8… UN something.  All I know are the streets are blocked off and the president was on the Spice channel or some talk-show I cannot stay up late for since I have to work at the crack of ass every day.

Today on National Petroleum Radio, I got ready for work.  In doing so used 2 kwh of electric for my radio, lights, and whatever and this came from either Indian Point, James Bay, or some tottering structure on the Ohio river.  I also used 10- 15 gals of potable water from the Catskill Mountains to remove a few ounces of urine and feces from my place of living or heated up so that when it touched my body for a moment it removed a few grams of oils from my hair and some slight amount of dead skin.  I listened to the radio about how they are going to drill down one mile under PA, pump in water until the rocks break, and extract whatever natural gas escapes.  They feel we are not running out of natural gas (as all the doomsters say) but “drowning in it.”

So, here is the plan.  Drill one mile down.  Then, turn the drill sideways.  Pump in tones of water (that drink me stuff).  Extract natural gas.  Use domestic fuel we “grow at home” rather than Binladenjuice.  The Gas Man in charge (HWIC) said that it would be like removing one half of the cars on the road from foreign oil dependance if we substitued our natural gas from the broken rocks one mile below and created cars that run on natural gas.  Ok…. so, your dotcom will be profitable when?

Here is a cheaper solution.  Remove half of the cars from the roads by creating a vast transportation network while at the same time focus on limiting transport of goods so that more products are from local market spheres thereby reducing the need for this world of globe-trotting resource slobs.  Do not get up for work every day, saving countless gallons of water and also do not pump water a mile underground saving billions of other gallons.  However, that would make too much sense.  I’d rather see what would happen if we splinter all the rocks supporting the surface of the earth, pump in the Ohio river one mile down, extract some kinda’ rock farts and then burn them in cars that run about the world with teflon engines…. take over planet X and terraform it using our powerful Orgone filled minds and give birth to spiders that we can milk like goats… or goats with spider milk. Or sheeple who politely stand in the middle of a police state (pictured above).

Summer is ending, the world over.  Cold and darkness is coming.  I hope we can burn those rocks for warmth.