There is a point where all beachside towns large and small meld into one huge pile within the old memory palace.  This is at least true at least for beach communities from Lewis, Delaware to Port Aransas, Texas.  Each incorporated village or city is allocated a standard set of amenities as if appointed by some central and hence SOVIET agency and all those tee shirt stores, and outlets are just Kolkhoz or Torgsin selling consumer goods planned by economics officers and embedded in the current Five Year Plan more than twenty years ago. Stores have basically the same shit for sale, right down to the “Life’s a Beach” shirt (get it? life’s a…) and then change their merchandise exactly at the same time, from Lewis, Delaware to Port Aransas, Texas.  Perhaps there is a central planning, at least by the factories of the People’s Republic of China whence we Americans get all our plastic crap-o-la. 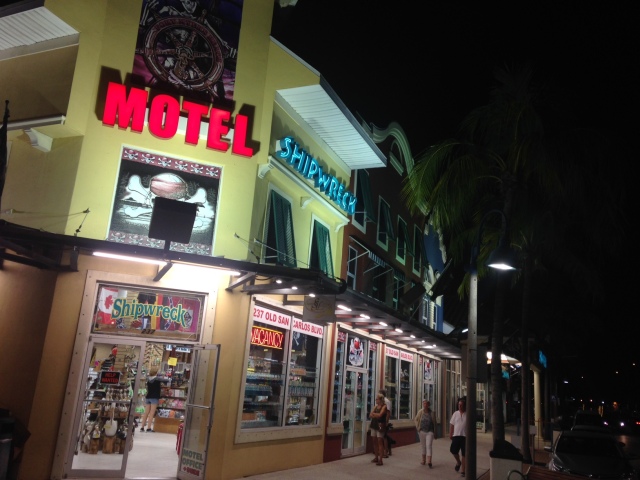 On the beach, one can expect something of a theme park atmosphere meets small vestiges or examples of heavy industry, such as fishing, oil and natural gas refinement, and military installations that split the sky with the occasional F16 roaring by. Fort Myers Beach is no exception to this set of general but not enforceable rules. Situated on the western coast of Florida, the city of Fort Myers has grown considerably larger and to the east many of the orange groves, cow hatcheries, and exotic pest plantations have fallen into development, a landscape of East Fort Myers that is today a dismal reminder of why we need strong land use policies and plentiful contraception.  The city of Fort Myers is at times a pleasant set of avenues but like the rest of the nation, and certainly Florida in the wintertime, streets are clogged with traffic from the early hours to late in the day making any movement a stressful slow journey where one is bored by the rate of slowly passing scenery (boat dealerships, gun show billboards, KenTacoHuts). However, one must remain alert when driving even if at 2 MPH.  At all times there is danger on the roads since drivers are either those who hale from nations where there are no laws, come from social-economic classes where there are no consequences, or are meandering in and out of consciousness as they plod through their golden years.  The accidents are plentiful and number of pedestrian fatalities quite disproportionate to the number of persons actually walking on the sidewalks or using a bicycle. 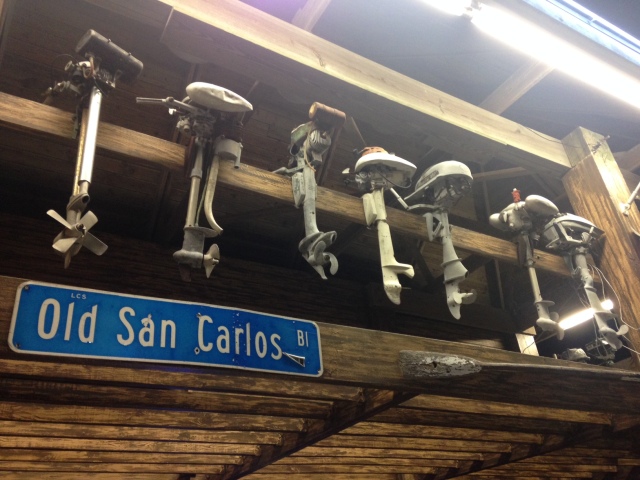 Fort Myers Beach is located 1-6 hours from Fort Myers, depending on the above traffic.  The simplest way to get there is to arrive at the beach at six in the morning, but the second best is to leave the car behind and take the bus.  While the bus is impacted by the same traffic, there are some stretches of bus only lanes that remove some of the sting and allow you to actually get to the beach before dark.  After the final bridge, the center of town is the inexplicably named Times Square, I assume an homage to the well-known area of a city that so many of the current inhabitants hailed from before relocating.  To the north is the tip of the beach in a very pleasant park (great to watch the sun set) and to the south one can continue on through additional communities.  The Times Square area is walkable and if it weren’t for the construction, perhaps bikeable too. 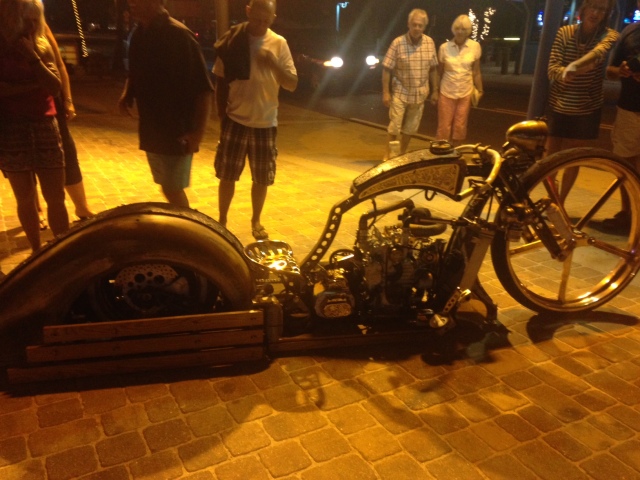 The shell stores were there in full force and run it appeared by the same Asian family as operates them throughout the eastern shores of our Great Nation.  I am always amazed by the number of shells that are for sale and wonder if there are any left in the ocean and how we come by so many that they fill bags, have googlie eyes hot glued onto them, or are etched with whatever name of wherever you are.  No sea side shope would be shells alone, and there are ample items from necklaces and shot glasses to necklaces and more shot glasses since everything is targeted to 14 year old girls where mom just said she could wear makeup and get those cornrows or your 21 year old brother who still has that bottle of Jack Daniels he finished all by himself and now proudly uses it as a candle holder. 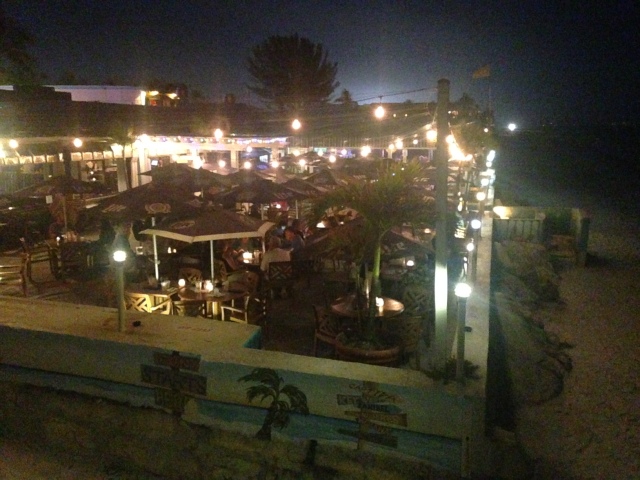 If shells aren’t your thing, there are other stores you will find there as well as in all other beach resorts.  There are the shops that cater to middle aged moms with all manner of wine-related or wine-themed or wine-stained items.  There are the dad jeans stores, whether they sell jeans or not. These are fewer and smaller and often these are cigar shops but frequently are Salt Life stores or cater to divorced fathers working on mom #2 or #3.  Then there are the bars and restaurants.  These face the ocean or not, serve eatable food or don’t, and for the most part specialize in fresh seafood and generally inexpensive drinks (when compared to those prices within the political bubble). 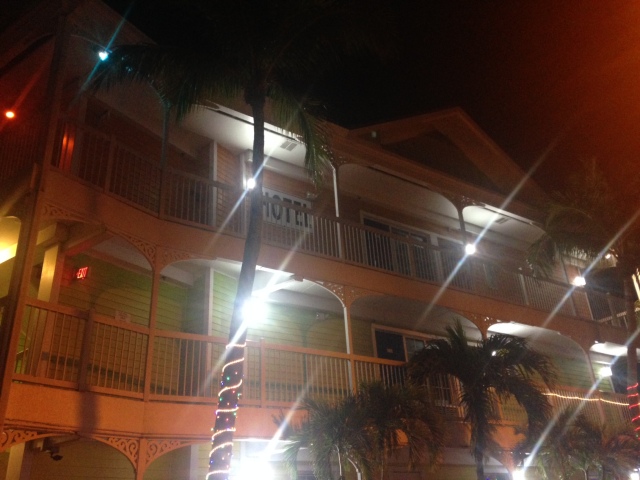 Sitting at any bar below Washington D.C., one may drawn into conversation more readily than in northern climes, whether one likes it or not, and especially this is true in vacation wonderlands.  I met a woman who lived on a boat, having raised a family on dry land years before and was divorced.  A few drunk sisters of a certain age who were about two shots away from tossing aside their tops and flaunting their bodies, much to the semi-embarrassment of their husbands, and chatted with a number of others whose only distinguishing feature was that they occupied the bar seat next to me.  I was not altogether surprised that to a one, these were supporters of our current president.  “I’m not leftist or right wing,” the older mom on the cusp of grandmotherhood exclaimed unprovoked by any comment of mine, “I believe what I believe and know that we need a change.”  I was not on a political assignment, but game to converse with those I would not normally come into contact with.  So you like [the President of the United States]? I asked.  “No, I hate him.  But he’s what our country needs right now. 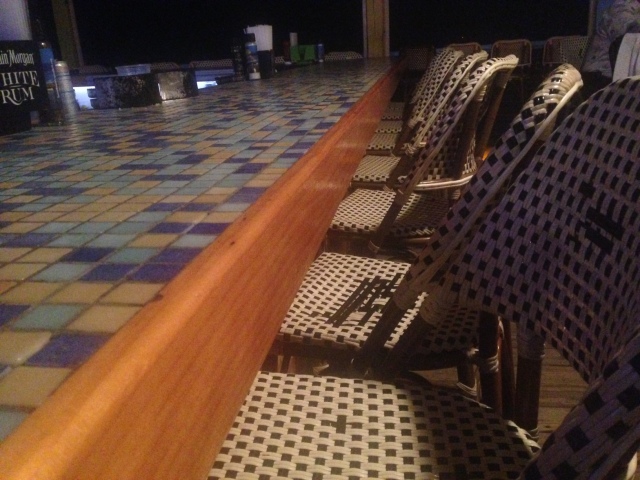 Change is ugly and clumsy but look about and you see more people fully engaged, more people are coming out with different perspectives and who knows, maybe he can get things right.”  Having studied both revolution with and without blood of the Late Modern Era [none have zero blood], I had to agree that revolutions are not polite matters and that change can often lead to some unexpected developments once the forces of various and perhaps heretofore suppressed emotion are unleashed.  Others I spoke to who broached the topic, which is close to impossible to avoid these days, seemed to share a similar complex view in terms of being glad that the election had gone in the direction it did, not entirely happy with the outcome, but expected that the blunders may lead to more political engagement by common people and there was a slender chance that the current administration may get something right after all.

To many this approach to politics may seem like the leaches, hypnosis, and  kale juice solution to good government and a civil society. There is no proof any of these techniques work, many people believe in them with all their heart, but who knows, the crazy idea just may save the day. I tucked in my drink and excused myself as the waitress had said not to go to a bar called the Mermaid since “people got sloppy drunk there early,” so that’s where I headed at once, having myself a need to call it an early night, sloppy drunk or not.  This bar is like so many others in so many beachside areas, the dive bar that serves the locals, younger people, and the staff from the various service industries whether hospitality, entertainment, or food and beverages.  The Mermaid is a plain cement-stucco building with as one may expect, a mermaid painted on the front, the sort of fish-girl that a stereotypical sailors get tattooed on their forearm. 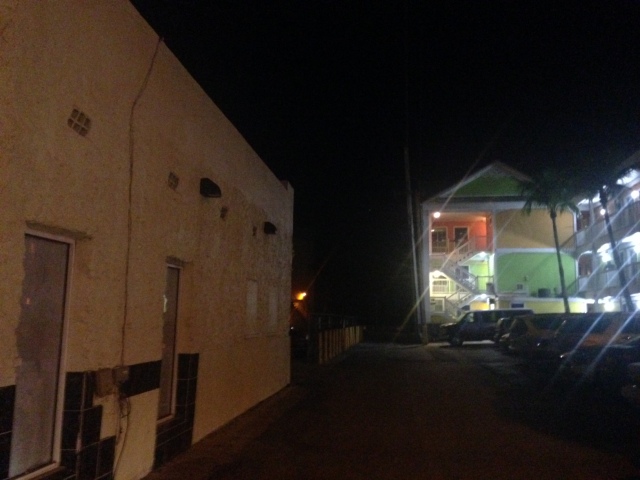 The bar also served as a liquor store with more a case of beer as a wall between the store and the bar than anything else demarcating the different establishments.  This is a departure from bars in the northeastern part of the country where laws are more stringent and at times Puritanical in their out-of-date concepts such as all forms of dancing or rhythmic swaying to a beat or melody is not allowed in New York City (enforced by the Mayor’s own Office for the Prevention of Vice and Promotion of Virtue) or that laundromats may have bars in Chicago but this would be a terrible idea to allow them in Boston or Albany, and that beer can be sold in gas stations in Vermont but not Massachusetts or that New Hampshire, the anti-government center of the Thirteen Colonies has the government under the auspices of the Liquor Authority sell and tax all intoxicating beverages and that to work at such a store, is a government job with great benefits such as a pension and healthcare.  The Mermaid crowd when I got there late in the evening (about 7:30 PM), was already well on their way to oblivion.  As the other bars, people were friendly and unusually open in conversation or taking random pictures of each other (I was asked to join a few photos as well as took a few group shots).  I am glad the availability of photographs was not relevant in my younger days where cameras were larger and more obvious, and one had time to adjust behavior or attend an event without any photographic evidence at all. 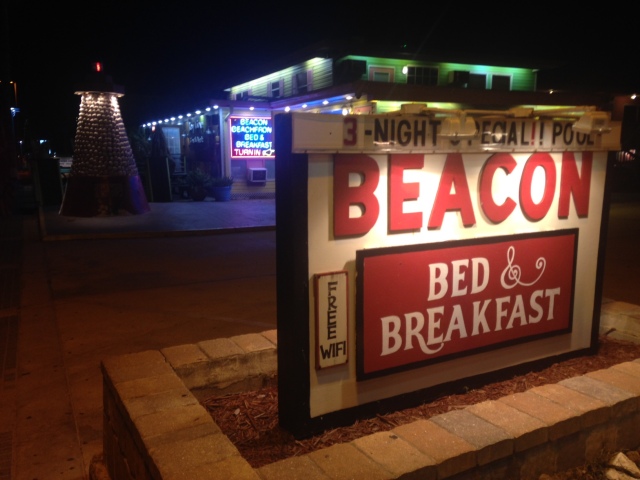 Catching a taxi back to the hotel was simple.  The traffic had subsided and I made it back in no time in order to catch up on some much-needed rest.  I thought of all the beachside communities I was lucky enough to visit in my travels.  So many share so much the same, but Fort Myers Beach was the chattiest most talkative one I had been to yet.  Perhaps it is because it is older people, people who come from the same background, or like the guy on the bus with his wife who had just retired 72 hours earlier, it was a place to escape the normal constraints and attempt something new, however revolutionary or disruptive it may be. 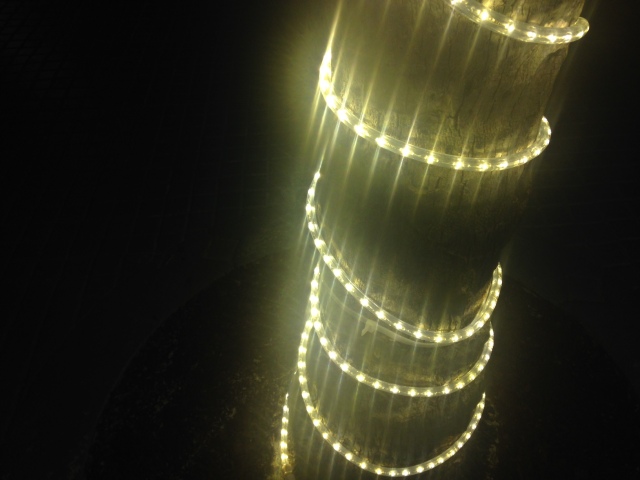