There are certain aspects of winter that are undesirable.  The cold, wet feet.  Damp, dank feet in boots that fail to keep out the cold.  Dreary days where the light is flat.  Morning looks like evening, and the daylight just passes before you are even awake.  When I worked in education I would awake well before the sun, in the dark and desperate hours of the morning, and I would get to work for all these miserable kids, these teenagers who barely slept a wink and hated everything would ‘welcome’ me and both me and all of them would hate the winter together.  We would torture one another all fucking day until it was time to shuffle our wet, cold feet back home, again in the dark.

Winter, the time of heating degree days.  I had to ask the science teacher, “man, dude, what the hell are heating degree days?”  To this day I still don’t know but am aware that during the winter I give lots of money to energy companies.  When I was younger, close to being a child but perhaps I was almost a teen, our house didn’t have heat.  The heater broke or something.  We did have a cobbled together wood stove.  It was desperately cold that winter.  The old copper pipes split open in places and at the moment the ice melted the water sprayed everywhere and made ice sculptures in the cellar.  We kiddos sneaked through the woods beyond the property in search of fuel.  In those days the farms had just died and were abandoned.  The woods were no longer full of hunters, and during the full moon, when the snow was so cold it crunched, when the air was so raw it hurt my nose, when the good and bad people of our village were asleep, we would slip into other quarters over the garden wall and remove branches, logs, and entire trees that had fallen as any good woodsman.  It was a childhood quest with a practical result.  For the night, we could warm ourselves.

In years later, and in better conditions, warmth was not such an issue as the work day in winter.  This one time when I joined a cult by mistake believing it was gainful employment, I would awaken before dawn to attend the morning meeting at what was supposedly a reform school, and trudge from the carriage house to the mansion in the ice and snow beyond the iron gate, and take my place at the table in order to proctor breakfast and help ensure all the students took their medicine.  I worked in the gray icy cold of New England. I lived in a Dickensian wilderness where our cult was wedged between a dark woods that led to a village of unknown age known more for an unusual burial arrangements than its hospitality and an ancient Institute of Oriental spiritualism center populated by members of degenerate WASP families that had become enthralled with Asian spiritual practices and dark rituals that involved wearing linen Yoga pants, eating quinoa salads, and discussing quinoa salads during month-long retreats.

Winter meant dismal cold, digging out the car to enjoy a commute of ice and danger, and paying multinational companies for the fuel that provided warmth I needed not drag through the woods to then go back with a broom and vanish my tracks in the moonlight.
It was clear, by middle age, I needed a winter sport.

Skiing is a difficult thing to take up when the ice shelves are a’melting and the weather is a’ climate changing and polar bears swimming and Santa drowning and Eskimos in Speedos and thongs.  As we pound a path to the surface temperature of the planet Mercury via human effort or natural shifts in the troposphere, any sport that involves sustained periods of cold weather mixed with precipitation that comes down as snow is an insane prospect or a high-risk endeavor, to say the least.   Add to that the fact that geographically, for reasons of race/class/gender, this author is stuck with skiing in New England and cannot just bounce an airplane to wherever there is snow, and skiing is a high-risk activity.  However, for a person of a certain age, looking to winter and praying for the “worst weather” is a new an invigorating activity.   I want it to be cold and dark.  When before I dreaded shoveling or driving in an inch of snow, I now pray for snow.  More snow!  Cold snap?  Yes, cold snap!  Can winter last until June?  Maybe there is some high peek where we can spring ski!  Can the first ’dump’ of the season happen right after Thanksgiving rather than our having to wait until January?  Please, dump early and often, be cold and bitter and dark and nasty and can all of this happen forever?

I was old when I was reintroduced to skiing.  It had been [a good number of] years since I strapped slippery sticks to my feet and jumped off a cliff.  My good friend called me one day and said, “can you come up and ski, dumbass?”  I checked my insurance.  Yes, I finally had health insurance.  Did I have money?  Yes, I had been working, and if I cut back on drugs/booze, I could afford some activity.  Did I have time?  Well, weekends but OK. 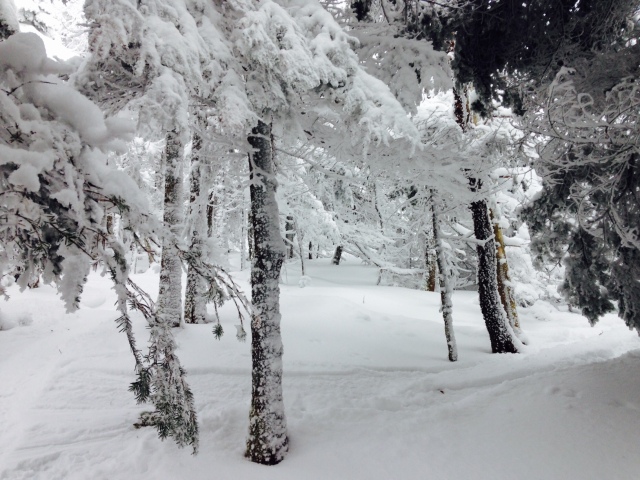 I took to the slopes.  At first, I was on the bunny hill.  On the way up with the other bunnies, I looked to the snow and the trees.  I felt a swell of complex emotions.  The years I had missed.  Not technique or skill. I grew clouded and sad, with a touch of anger.  The years when I could have been exploring slopes with friends.  The pleasure and confidence of being good at something, something not academic since I sucked at all that, the confidence that one needs when young to battle all the voices external and internal that say, you will never amount to a shit stain.
I was on the lift in the cold.  I wore equipment that was in my closet, stuff a friend of mine said ‘hang on to’ but never returned for.  This stuff I was almost tossed into a dumpster.  I was actually with the bag and thought… let me hang on to this. I had the goggles.  The pants and jacket.  The gloves and helmet.  An outfit I didn’t need to buy, I had.  “I don’t know how to ski.  I am old.  I’m going to break my [leg/neck/ass/arm/bone of some kind].” 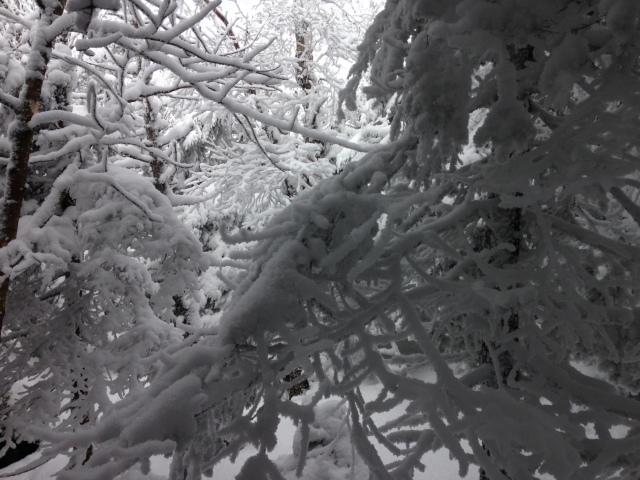 A five-year-old fell off the lift, and I sat there on my chair as the entire apparatus stopped dead, I was on the lift forever, on the bunny hill, thinking, how could this have happened?  By now, I should have been wrapping up my ski career.  I thought of the ski houses my friends would rent when I was younger and could ill afford it, and they would invite me up or just forget to, and I would listen to all the fun they had.  I thought about a college friend, paralyzed from a skiing accident, and how this had colored my view of the sport.  I swung in the cold winter wind.  On the chair. I thought of all those missed connections and maybes that could of may have been.  Those long winters I somehow missed my friends.  I missed their youth and mine.

In a few days of lessons, I had gone from bunny hill to black diamond.  Lessons and the insistence of a friend helped me move ahead.  Also, I must admit, years of doing dumb shit like riding horses, unicycles, motorcycles, and rollerblades may have helped.  I was filled with confidence at my accomplishment.  I was having trouble at work and this all changed.  I came back with a new found attitude of positive optimism.  I had, at this late stage in my life, started to learn a new skill and one that people respected.  Five days later, security escorted me out of the building at my place of work.  While I had gotten good at skiing, the political situation at work had caught up with me.  I was shocked, afraid, and sad.   I had just learned to ski.  This was an expensive sport!  I needed to get another job to afford to ski, I needed health insurance so I could ski…

In no time, I had replaced my job with a new job since in these days one need think of employment as one thinks of poop.  You have to do it or you will die, it’s all the same unless you eat corn or beets, and in the end, it stinks up the house.  However, unlike poop, my new job afforded me the time and money to return to hone my new sport, buy equipment that wasn’t Adam’s old hand me downs, and push beyond the bunny slope and first forays on the harder hills, and more challenging terrain. After four years of playing, I have skied five states including New Mexico and Colorado and logged close to 124 days of skiing, which for the Last of the Ski Bums is nothing but for my doing it à la carte is an accomplishment. I still tense up on those icy steep cliffs, but I have enjoyed long runs at Breckenridge, Vail, Killington, and Taos.  At an age where most of my peers are complaining about torn ACL joints, children and babies taking their time and money, or the boredom of doing the “same runs” each time, I am but a fresh-faced kid in an old body looking at each bungle in the woods, each yard sale off a cliff, each adventure as a new and exciting day.

While so many complain about the cold feet, the dark flat light, the heaps of snow in the driveway.  I look to the weather, log onto the snow report, and pray for the worst storm ever, just one more touch, just a little ice age, so I can plow down fresh power and rage on as long as my knees will allow. 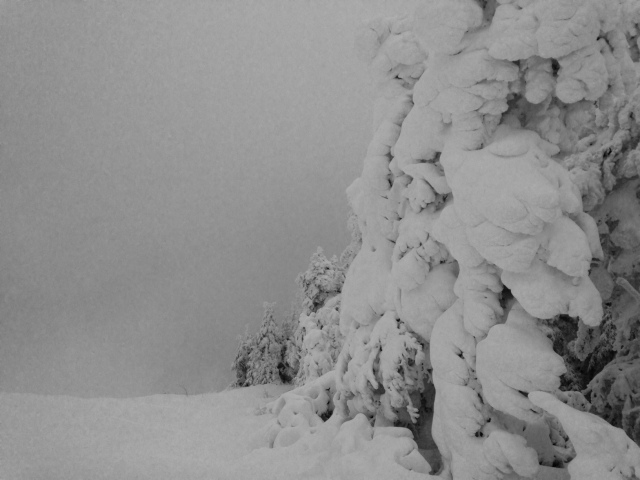