A facadectomy is when the front of a building is preserved, but the rest of the structure is replaced, typically with something dreadful, cheap, and altogether the work of devotees of evil arts and meaningless crafts. Leaving the face of a building intact is the olive branch of contemporary developers to those historical communities, an offering to those who look at older buildings as more than outdated stock that needs to be replaced with more efficient instruments of income and wealth.  Some buildings are more then wood and brick but are important aspects of a built landscape and priceless parts of a national patrimony.

I assume most architects these days are angry failed anthropology students who measure all production in calories in and energy out and have replaced all pleasurable eating with Soylent (TM) in order to save more time to work with their AutoCAD. Apart from removing the face of a building and rendering all the guts into landfill, there is also a form of less extreme renovation that retains much more of the edifice.   This is wrecking ball renovation.  Including the front face of the building, the parts are ripped back to the structure to the basic elements, the foundation, a few brick walls perhaps if they will one day photograph well in a Craigslist post, and the tresses and trusses of the floors because these are expensive to replace.  Sometimes important architectural details are retained for re-installation or positioned as a singular relic of repetitive design, but more often than not these details are spirited away to be reused in bars and Olde Tyme themed eateries in Chicago, New York City, Queens, or Brooklyn.

What is then left when this costly process of total renovation is completed is a house that may resemble its former self, but it has been made into something else.  It has become a stage-managed example of such-and-such a style, a clean version of whatever history – the nasty bits have been knocked away by the educated hand of progress and covered over with accent lighting and perhaps a few security cameras so that every wo/man’s home is a fortress when they cannot afford a castle.

The Old Towne of Alexandria Virginia is independently resplendent with such apparent examples of gut-preservation and wrecking ball restoration.  It seems that the streets are not Disneyland Main Street USA (TM) fake, but creepy living history dad dresses up as a Civil War soldier on weekends sort of way.  What remains of the original old Olde Towne is a handsome enough place, but there is a creepy wax quality of these ghosts of our Nation’s past something to note.   I kept looking behind me as if these houses and gardens were a grandma who came back after being gone for oh so long and she like a winsome teen with old and clouded eyes.  A certain old soul poured into a hot sex dress, cracked glass eyes rolling about in a perfect porcelain head.

Walking about the harbor it was evident that the post-post modern movement had taken many a movement on and about the water.  SOme were the same brick buildings as one finds in these urban renewal centers as found in Cambridge, MA or German Town Columbus, OH, or the heart of Boston, MA where faceless brick structures of a neo-brutalist quality “juxtapose” against the older actual important buildings.  “Juxtapose” is the architectural form of taking a steaming hot dump on the sideboard next to the Pâté en Croûte would make the dinner that much better since, well, you juxtaposed right there and looked at how all that wonderful dinner now reflects on the surface of your creation.

Away on the other side of the river is the National Harbor.  The complete anthesis to Old Town.  Perhaps twenty years ago a forest covered National Harbor and today is an entire city of corporate meetings, condos, a Ferris wheel, and strange hotel that ate a village and poops out conventions, coloured light dancing fountains, and a pulsing idiotic mass vibrancy that, were he alive today, I could assume Albert Speer and his ilk of … Ahem … urban planners … would beat off to each and every night.

Walking about Olde Towne, even with the creepy valley of the doll eyes buildings, the cobblestone streets are picturesque, and once the visitor wanders off of King Street, these routes become quiet as the sidewalks may be a little uneven.  King Street hosts a number of fine eateries and shops, and I ducked into one of the fishmongering restaurants in order to take advantage of the l’heure du bonheur and inexpensive oysters for which I hosed up these sea creatures like a common swine until the shuckers carpal fatigue cut me off.  Satiated and with bits of shrimp legs wedged in my molars, I strolled out into the moist and somewhat dank autumn air, nature not having yet swept aside the summer humidity of the mid-Atlantic while Man has ushered in the season of Pumkinspice and is already fitting the windows for Chrikwanchunimasszaeid Season. 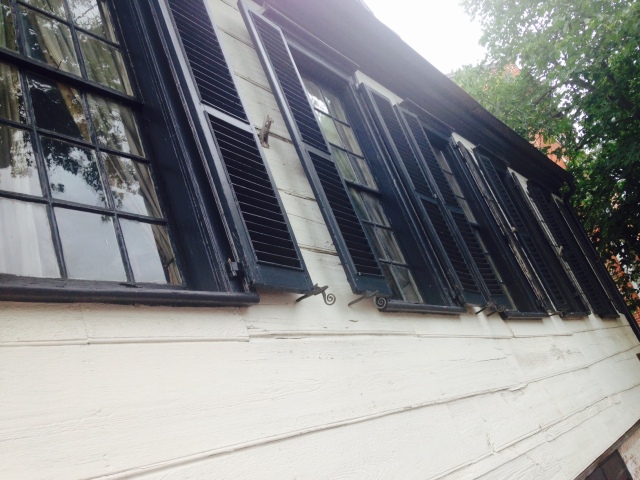 There are a few alleys of Old Town that are turned into parks and others gated but give a glimpse into the once bustling conditions of a town that has a history you, Dear Reader, may apply the Googles to discover but suffice today that this history encompasses the best of our American Experiment and of course the worst of it too.  I turned up Prince Street to return to my hotel, the doll eyes of all those well-restored buildings all turned to follow me.  The quiet sidewalks monitored by a thousand cameras shooting lasers to open up the night and keep safe this open air museum for another generation to enjoy. 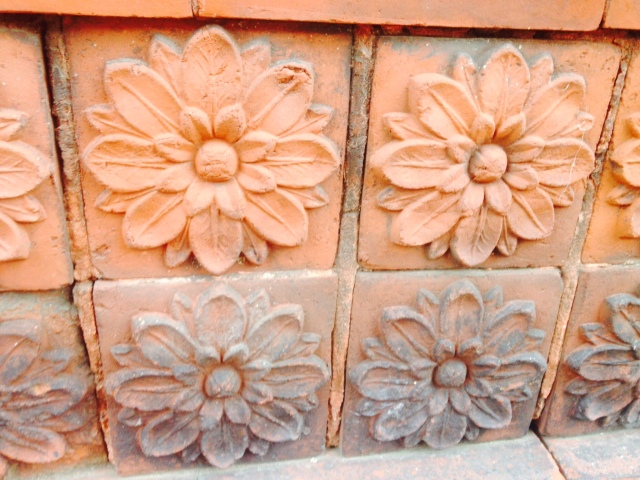