Is There Life on Le Mars?

In this Great and Storied Nation there are many vistas of wonder and edifices that inspire.  The canyon unspoiled.  The Adobe church surrounded by suharto cacti and prickly pear hedges.  Those things made by God – the mountains and vistas and those ancient things built to honor God – the churches, monasteries, temples, alters and places of offerings that inspire and perhaps give us a sense of the many things that are larger than us and greater than our individual and very personal struggles. However, in order to maintain the balance to this cosmic equation, there must also be vast expanses of confusing ugliness and a comic panoply of cluttered dwellings, developments, arterial exits and clovers, transit hubs, discount stores, junk yards, and sundry smattering of ill conceived and executed plans.  These dull things we take in as our natural world but if we can, we avoid these places because they magnify our very personal and often trivial troubles.

REI, The North Face, Paragon, Osprey, Keen, Salomon, and Patagonia are not making or selling gear so you can go see what humans have made for themselves – that thick rich fuzzy carpet of electrified nests and networks of cement veins upon which a million cars burn roughly 4514 gallons of gas per second.  This is the world we sit in stalled traffic to and work all year to escape for 7-10 days depending on the constraints of our PTO days.  This civilization is pervasive and is rationalized because people have to live somewhere. Roads gotta be somewhere.  Things have to be made somewhere.  And these things can be jumbo jets, plastic kewpie dolls, or ice cream.  When we cannot get to those canyons or churches, we can always turn to the things to we make that we like from the things we make that we don’t like to comfort us.  Like ice cream can make it all better.

In the realm of ice cream, a good deal of it – along with it appears some about of the nation’s strategic supply of Land O’Lakes Butter (TM) – comes from a small city called Le Mars that has overtaken the prairie and rolling hills of northwestern Iowa and proclaims itself the Ice Cream Capital of the World.  I have fact checked that claim, but I was told by more than one person, as far away as Sioux City, that they enjoyed the ice cream dividend that comes with the proximity to Le Mars as so many in New Jersey enjoy the lack of state tax on that product due to the location of the refineries and piles of asphalt-covered aggregate in their backyard. 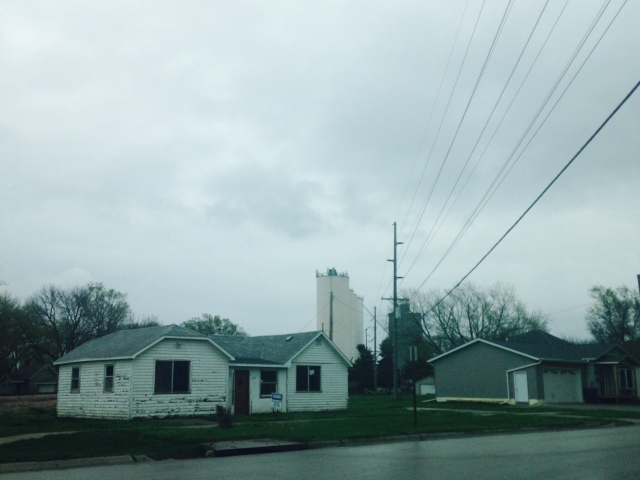 There is a history for this town as with others out in these lands, however, I won’t wreck the surprises in store if you use The Googles to do some learning on your own.  My impressions are just that of a simple traveler, one who has just hammer down up the freeway fending off white pickup trucks and huge 18 wheelers carrying chickens or chickens or perhaps butter as I make my way on business of my own free agency.  Unlike other regions of the state, the modern age has met these acres and among the dirt roads and formerly grand farm houses now lost and dark in a thick copse of trees, highways and progress was about me.  It was not easy to hide since there was no natural barriers in the landscape and towers could be seen for miles away.

The farms of long ago have been mechanized and these plants of production are not quaint in any way and the bitter and cold metal of the slaughter houses so described by Upton Sinclair have in many ways expanded so that food factories – whether meat or vegetable or in this case dairy, take on the physical appearance of a plant as if I. M. Pei, Gerhard Kallmann, and Ayn Rand dropped acid and drew up the plans for their own personal utopia.  That, or a set from Blade Runner.  Minus the mood lighting. And mood fog.  And sexy replicants.  Or sexy anything. 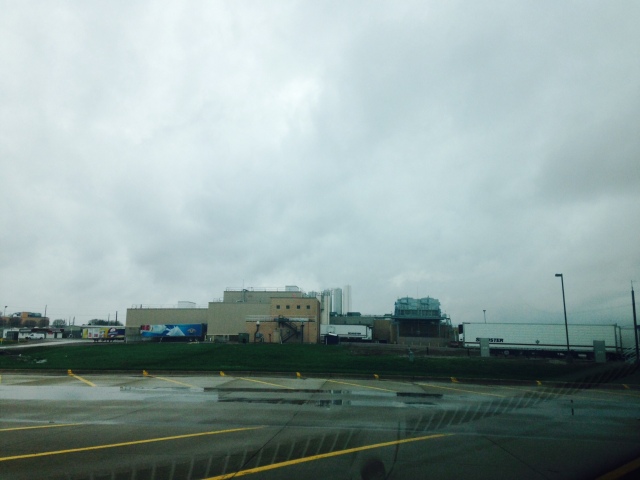 The Blue Bunny plant, the Medical Mechanica of the area, dominates the landscape (other than the chicken finger corporate office by the highway exchange), and the downtown is but a small fixture to this larger set of towers and complex systems turning out endless acres of ice cream day and night as some Fortean creature laying so many cream eggs stuffed with Rocky Road, Mint Chip, Fudge Twirl, and Pistachio.  Beside this empire of ice cream is a new wealth of those who work hard, and ice cream harder. Polite houses in neat lines, each one a much improved upon design then those old GI tract homes but there still is a carbon copy Valley of the Dolls, with a dash of the Hills Have Eyes and a smidgen of Bodysnatchers about the place.  A few generations, should we all still be here and perhaps the sapling landscape trees will take hold and give an atmosphere of permanence as well as blend in these structures with the land in a way that would make Frank Lloyd Wright whatever emotion he had when he wasn’t storming about tossing houses on waterfalls or smashing cement between blue stone.

The downtown of Le Mars is like others in Iowa, or at least this region.  With more people driving longer distances, the sort of stores that continue on in the downtown are of a niche variety or convenience store.  As with other towns there was a Godfathers Pizza, a fake Country Store gas station, a bicycle shop, a bank or two, a karate store, the insurance company, a cinema of some disrepair or modern improvement that just shat across the older formerly grande facade.  Inexplicably there were also travel agents.  There was one in Le Mars too, this one called ABC Travel.  For you kids out there, a travel agent was a human being who would help you book all travel arrangements.  They used to use a telephone (the sort of thing you see black and white movie people talk into) to speak to airline human beings to discuss air tickets or whatever needs you had.  I am not sure how the industry has changed, since the last time I was in a travel agent’s office it was 1991 or 1992. But… there is one in just about every city and village of any note in that part of Iowa. It was clear by the breadth of the main street and the looped road at the end that there once was a trolley system.  In the old days, I could even see the charm of a place like this, as I saw the vanishing charm of so may other dying downtowns across not only this state, but across the nation.

i guess things are better now and perhaps we need not look to mourn for what seems a loss of these old ways.  Highways and stoplights and LED lights and the sound of jake brakes and Kentacohutbell drive in speakers and the sound of plastic shopping bags flapping in the trees have their own beauty too.  And perhaps we need create adventure gear so that more of us can get out there and enjoy places where things come from, especially things that make us fat and sassy like ice cream.