There are some vantage points where it’s a toss up as to whether to look at the view or toss yourself off the ledge.  Suddenly one day, and you are in front of some really heavy depressing crap.  Eat a candy bar.  Eat ten.  Oh snap, it’s still there.  The weight of the world are the cobblestones and there is one in each pocket and it’s slowing you down.  It’s like the air is dead, as if it was filled with living things and they all died and now you fill your lungs with their rank dank starkness.  No amount of inspiration memes – pictures of canoes and resting females and lions and sunsets with platitudes and verses and quotes from someone with way too many vowels in their name – come to the rescue of the spirit that with each actual sunset, exclaims, “I’m glad that’s over with.”
This is what is like riding the subways of Gotham. 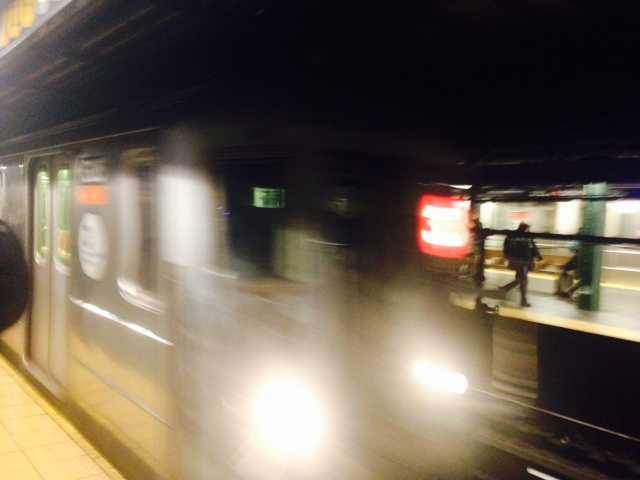 I am sure I have written about it, yes, yes, I am sure on this very blog.  My first memory of the Subway of New York City.  I was crying.  That is what I did.  I was that kid that made you not want kids.  I was crying with mucus and poop and Italian Ice drool  I screamed bloody murder.  Now, don’t get me wrong, Dear Reader, I am modern and accustomed to contraptions and yes as a child I would be afraid of things but you were afraid of things too.  What did I know about the SOVIET-era lumbering giants of the underground of New York.  I was just some hippie-kid raised in the Socialist-metropolis of Montreal and there it was s civilized and – for the most part – brand spanking new system of transportation.  We kiddies loved it.  The Metro of Montreal.  We got to enter the system with a special ticket you put in a machine to punch the time.  KA-CHANK! and it was 21:04.  On your ticket.  And you didn’t toss away the ticket but no one seemed to check.  When you were done, you tossed it into a big cube on the day out.  That was it.  The metro was a quiet cement tomb.  The posters for the World Fair, Olympics, or the Bay Of Pigs were all over the place and hushed people ran about the cavernous spaces.  The subways came into the station with a swoosh, passing the 1970s orange and beige tiles, the orange and beige people, the smell of electric engines an incense in this temple.  The station Guy, Palace Des Arts, Montsomethingorother, St. Oneofthem, I can remember every detail.  The trains in that fare city drove on tyres, large fat black tyres thick as the nerd folk singer glasses of the friends of my parents.

Then we came to the tattered shores of the United States of America.  We plunged into the feted urine-soaked cum-encrusted tulgy hallways and dim-lit open air sewers of the Mass Transportation Authority’s system of tubes, all of which screeched and screamed as loud as we kids could howl and wail.  My ears were blistering, my nose running black and gray snot as my body rejected the offal and inky excreta in the air.  “Don’t touch anything!” my parent exhorted.  Oh don’t worry parent, we won’t touch anything, oh what’s this pile of weird tubes next to the crumpled cigars? Oh what’s a tampon, well, it can’t be that dirty they’re still in the wrapper…  Parent, why are you smacking me?  The tokens had to be fumbled into the turnstile.  We were young, but we already knew the number of token booth clerks who were murdered collecting these coins from their boxes, the same turnstiles as my grandparents remembered and people were being murdered for these little fake coins.  There was no stamp that said 18:06, there were only a group of angry men drinking and cursing and flickering lamps and the coating of paint of different expressions and statements all one over the other and frightening to my young eyes.

We got to our uncle we knew as Uncle Butch but his real name was Boise or Champ or Elmer.  I remember the apartment had very little light but it had a huge table in a room, perhaps a dining room, with a glass chandler hanging over it, almost toughing the top of the table.  Very fancy, I remember thinking.  It was the Palace Des Arts in my mind.  He was living with a woman who had gotten polio from the vaccine back when vaccines were still actually dangerous but back when people thought the risk was better than everyone actually getting whatever it was they could have gotten by way of no vaccine.  So Butch lived with this invalid, which in those days was progressive, at some apartment there I don’t remember where it was exactly but recognized the description of the neighborhood when I read William Boroughs Junky in college.  It was Cathedral Park area, 110th Street on the blessed Upper West Side when all that was junkies, men fresh out of Vietnam, and people of both genders, well all genders and expressions of gender, fresh out of the insane asylums and mental health factories upstate raging and ranting and falling over one another.  Man the streets of Old New York were littered with broken people.  Off of the screeching rails and the crying kids, we didn’t have good memories of the subway in dear America.

Later, that is decades and while I still cried as a child it was for other reasons and perhaps when I was drunk, I road the subway.  A lot had changed about the subways of New York.  For one thing, they were the same rolling stock as 1964.  The same cars were redone in 1984 and it was 1998 and while the graffiti was gone, the pee smell somewhat abated, the old rotting stations and tunnels were much the same.  The city still refused to invest in the transportation of the masses and yes the glass had been hardened and yes the task forces cleared all the tags and more-or-less mopped the place of Pissandshit.  With more people in jail, and the streets cleaned up about 42nd Street, the subways were again safe even if they were exactly the same machines your Uncle Butch took to and from his draftsman’s job from Heroin Uptown to booze and sex Midtown.

I used the L train, a then creepy and rolling forever late and delayed craft that the only saving grace was that as you sped through the tunnel from 1st Avenue to Bedford one could relive one’s self or smoke a cigarette standing between the cars.  That is how few people lived and loved out there when I first went to Brooklyn, but later, it was teeming and just thinking wrong could get a ticket.  Yet the subways ran no smoother, no faster, and while it was not easy to find a dumpster for which from behind to take a pee, the air was still rotten, the vapors of all manner of bad ideas from the 1970s and 1980s had yet to be fully ventilated, the rank sweat of the police officers arresting black and brown men was still in the air, the whole system rotted alive, a zombie system that kept rolling.And for years I have taken this beast of a system.  Night after late drunken or sober or tired or late or awake night.  Month after paycheck month.  Year after year.  I age, but the subways stay the same age.  I have gotten deafer because of all of this.  Alone with age, I know my country ears have been ruined and at night, in deep silence found only in nature, I hear the ringing that is tinnitus and I blame the night after night of screeching rails and the chug of the horrific repair trains with their diesel exhaust filling the late-night chambers with unusual air.
The trains I take today to work are for the most part the same as those I used to take when I was young, and perhaps a few of them still lumbering late at night my Uncle Butch and all those junkies took Bad In The Day.  I don’t know if I wish for the silent hum of the electric engines of those metros of Montreal, but as I get older, perhaps I do wish for that and the sound I may today hear, if it weren’t for those horrific machines pumping heat and anger under Gotham.

Editor’s Note: Technology is for suckers.

2 thoughts on “The Subway Series”