It is as old as any Rite of Spring from the Old Country or any country.  It is as complex as any native dance captured by those early explorers, as seductive as a dance of veils, sacred as temples enshrouded by dense spice and vapors of incense.  The weather changes – even if it is not changing from the cold of winter to the warmth of spring but the warmth of winter and hoteth of spring.  And out come the denizens of Gotham from their winsome layers and fulsome activities in order to enjoy these new days when all thaw a hundred sundry piles of unknown leavings of the darker winter hours and we as a mass go out and enjoy this admixture of those first blossoms of spring and the excreta of vermin.

While there are parts of the Great City that have parks and promenades and plazas and places to stroll, none is as known, storied, nor bespoke to the fits of ego and aspirations of Gotham as that Great Central Park, so named because it takes up a great many central and valuable acres in the middle of the Island of Manhattan, mistakenly thought of by the neophytes as New York City.  Eight hundred and something acres, to be precise of sculpted nature.  Rocky outcrops, pathways that wander in and out of woodlands, ponds that surprise the visitor and gentle brooks that emit and return to pipes but along the way spill and frolic along less as drainage ditches as we treat our other bodies of running water (Harlem River, East River, Hudson, Esopus, etc.) but as a skillfully curated aquatic meditation as planned as any exhibition.

These features while constructed are indeed a work of pure art.  While tastes in shoes, the entrements of lust crime, and favorite drugs have come and gone upon a million little-unrecorded fads, the park has retained the original mission to provide an urban population a space in order to touch nature whoever false that experience may actually be.  The Park at the same time offers a meeting ground for all elements of society in a non-confrontational and ultimately – some horrific crimes aside – safe space… however casual that contact may be.  The park faded in the 70s and almost crashed and burned in the 80s only to again be revived.  Pathways restored.  Picturesque structures rebuilt.  Flowers and trees replanted.  Not that the Police State of Gotham hasn’t protected and allowed this revival to occur.  The park has so far arisen from ashes from the threat of development to the blight of Hooverville showing that in some unknown downturn of society when again the forces of chaos and darkness come to the park, that it too shall pass as the rise and call of any empire.

Today the visitor has a safe passage in order to stroll, jog, cycle, or if middle class, drink wine on the Great Lawn.  One can visit anytime before 1 AM since now all parks have obvious closing times in order to thwart anymore Occupy Wall Street protests from taking root.  Within the sanctioned hours, there is much to do and see.  The lower quarters of the park just off of 59th Street belong to the tourists and the multitude of itinerant artists that feed off of them.  From the caricaturists and artmongers, to the entertainers, the man in the rubber Statue of Liberty suit, the bubbles for tips, the crystal heart young lovers can install a photo in so in a rage of passionate argument he can smash it, and Sharon can scream with tears down her face, and each word drenched in the mucus of sadness and anger, “how can you Bobby? We bought that in Central Park! We got that when we were in love!”  This area is often crowded, but there the core elements of central park are in obvious tones.  Subtly is not a feature here.  Fountains, the Dairy (that sells no cheese or ice cream sadly), the rocky rocks, the ice skating rink.  There is the small zoo where all the animals have to be on Prozac(TM) in order to brook such a stream of yelling children and proud parents in such small and constructed confines.  This section is where one finds the animal clock where you can take a still picture of it moving, or a video on your iThingy in order to sort-of-hear-it-play while some strangers talk about their latest job interview or other way-too-personal and yet boring details.  “She didn’t show up to her rotation.  I don’t care if she is sick, she is 38 and doesn’t have tenure!”

From this sector, the park takes on two sides and becomes Janus, save that this two faced god is not a sprite of humor or tragedy but that division between the Upper West Side and Upper East Side.  The center is saved for the blended areas that cannot be coded as binary.  There is a pond where you can wait on an ungodly long line in order to rent a boat, row about trying not to crash into the boats driven by those who do not belong in boats, and then when done pee in the most awkward setting where – at least in the identify-as-male pee house one may find a very real version of that whole “different Raceclassgender meeting point” as you attempt to release yourself next to a man rewinding up a turban, a gentlemen with no shirt on who may be chemically enhanced, and a little boy who for reasons social and perhaps neurological, makes direct and sustained eye contact.

Above the Fun With Boats part, the Midlands of the park contain the Play With Balls part, the Sit On Grass (and drink wine if you are Middle Class) part, and the reservoir which seems a stupid place for a boring lake one cannot play in, but there it serving to both bury the old Hooverville as it provides New Yorkers with a vat of “clean” drinking water upon with to sip, sup, and flush away as each individual is inclined.  And from these two sides two very distinct cultures impress themselves upon the landscape.  Of the East, think not of those stereotype images of the Oriente and the strange.  The East Park is a more formal area of statures, monuments, and structured gardens.  It is the view for the Museum Mile and the residents, of course, want to look at nice things and have easy access to the jogging path that goes about the reservoir so when the crush a deal and have to blow off steam or after handing little Cloe off to Obuwananala to be taken to the Baby Mozart program (she is so good with kids, but you can’t have her) there is little in the way of such enjoyment.  The Museum Mile intrudes for a moment on the parkside with the Metropolitan Museum of Art (The Met), a fastidious and eternal institution that emerges from the trees at once and again brings to it a multitude of tourists and those lovers of art and culture.  Above The Met is a rather bland patch of more of the same as before punctuated by the gates and iron fence of the Conservatory, a garden that can hold its own with any of the great ones a traveler may visit.  The visitor must either leave the park and travel beside 5th Avenue or go deeper into the park crossing the Midlands and into the West Side. 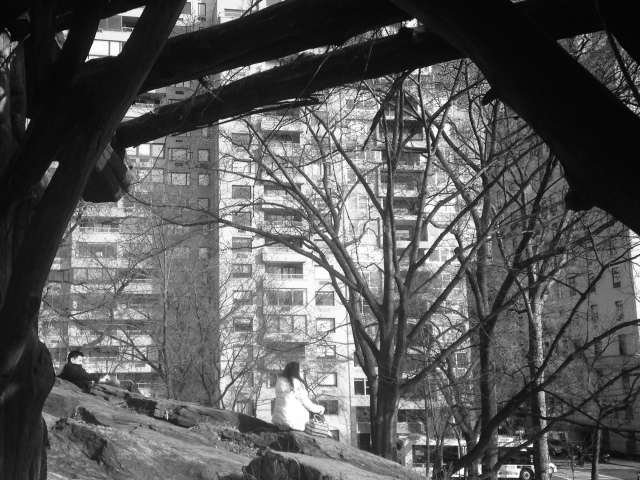 The Upper West Side as the East has risen and fallen with the times.  While the riots, poverty, drugs, and hopelessness of that New York the millennial/a/um NYU student wishes she lived in were held at bay at 96th Street on the East Side, the West Side saw that fun and games dip into 86th Street and also infect the park with a certain hefty danger that all but ensured that along with angels, few others in their right mind or not tending a BBQ grill made from the rim of an old tyre with a huge and tight-knit family feared to tread.  The West Side is home of the Great Northern Woods full of homeless and heroin, the Rambles full of sexual encounters too diverse and inventive to be described by this modest blogger (read Savage Love in order to catch up on what you’re missing).  That chaos has since been beaten back by changes in society and the Police State, and again the families have returned with a boring and planned play-date vengeance.  Not that this side of the park isn’t more interesting in the landscape or the little-unexpected elements and social gatherings.  A child’s superhero birthday party.  A hidden field where wymen have gathered to cult and talk about the earth as subways secretly rumble beneath their feet and further down sewer pipes ooze the ultimate expression of our humanity.  The section called the “Children’s Garden” but for which the entrance is so lost in close bushes that one cannot imagine any happy childhood memory being formed there.

Then, as before, the parts of the park merge into one.  This area about 110th Street used to be a no-fly zone.  This blogger remembers stepping out of the subway and feeling at once threatened and afraid.  The Meer was a tulgey puddle, the woods an encampment of those guys who hang out in the back of bodegadelis, and the once gentle paths had become corse and crude walkways through trashed littered grounds.  Since those bad days Mindy and her NYU friends wish to have lived, the Central Park Conservatory have battled back the gloom and reconditioned this top of the park in a more equal standing with that lower, having restored the boathouse, revived the waters, restored the grass, and renovated (somewhat) the skating rink cum pool.  Again, families have returned, and while there is not the fun chaos of those large gatherings cooking choros over a charcoal fire using a shopping cart grate over a truck rim, the North Park has finally managed to be as nice and polite as the South Park albeit full of people who live in the area and come from afar rather than people who come from afar and visit the area.

As the uncontrollable weather marches to warmth and perhaps giving us the hottest summer to follow a winter of such, Central Park will bloom even more, the trees unfold, the rats birth, the birds return, and all of us will walk in these few acres and as was intended by those original dreamers, believe for a moment that we have touched nature and for that, be all equally revived.

Editors note: autocorrect is not the friend of this blogger