The name of the bar, the bar is called Heaven. 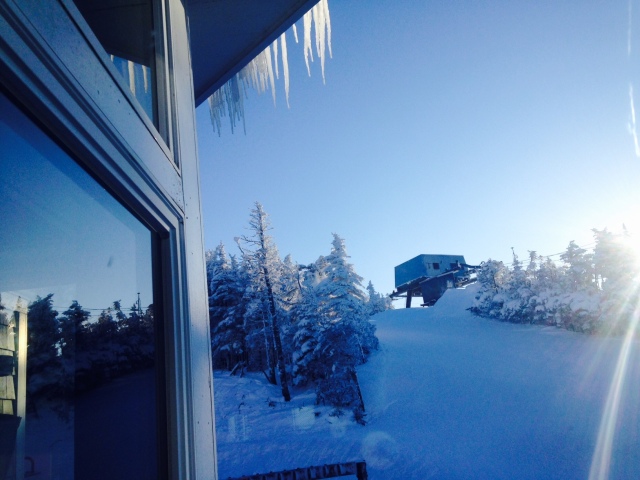 It must have been 20 years ago or more.  As the old say, life does fly by, and we cannot stop it, and these things that I believe are immaterial are now part of history. 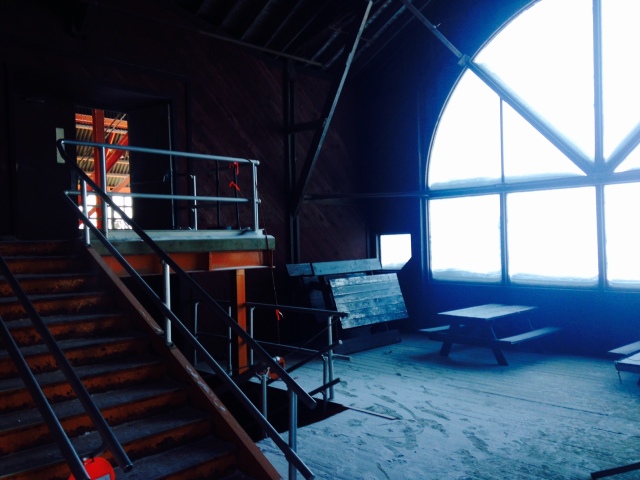 I was young and traveling, and the Soviet Union had just collapsed a few short years prior, and all sorts of borders came down including the Rumanian frontier or, at least, restrictions on Americans traveling there.  So, in Budapest and gathering all my courage, I moved alone to that rich and storied land of Vampires, Orphans with AIDS, and organized crime. Romania of that era is another story, but what is pertinent is that in a village deep in the Carpathian mountains.  A little town built for a forgot king called Sinai.  There was the rail station, formerly for use only by the old king, the place where the Iron Guard shot this guy, a few kiosks tossed up since communism ended, and a road that went to a hill that led to a ticket agent, a surly woman, and she sold me a ticket.  I was not looking to spend the day, but I had an address for a hostel or such.  I took a ticket to the tram.  The Soviet era trams that took visitors to the top of the mountains.  In winter, this was for skiing, for summer, it was for rambling and hiking.
I didn’t have much time, but I took it up.  Somewhere half way or further, there was a monument.  I looked puzzled.  Another passenger of the tram told me, oh that, that monument is where back in [1980 or something] the tram plummeted taking all these skiers to their deaths… “Sorry, my English is not that good, I am Italian not Romanian,” I seem to remember him apologizing or perhaps later invented that common statement when I traveled in those days.  At the summit was a young man guarding a radio tower with a machine gun.  Today this seems like a phantasm of memory, the sort we accused grandpa of having, but I remember this youth in an old style trench coat with a gun and the wind being the only sound outside of defending silence and somewhere, far off, the clank of a bell tied to a goat. 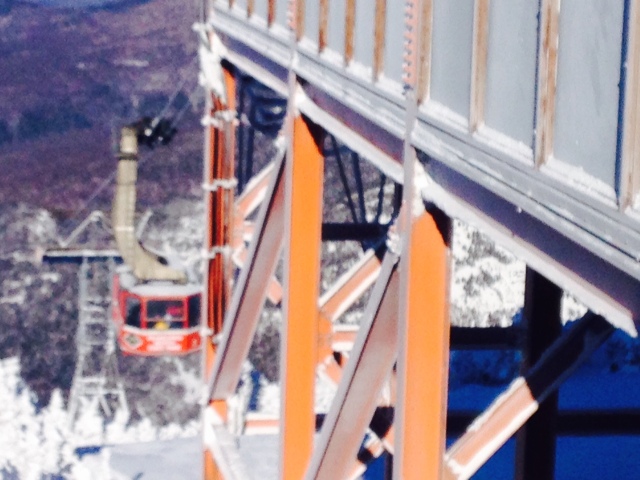 I again thought of that long off tram ride as I again had entered a tram, this time, in far off America and for the first time in my life, surrounded by skiers.  I snapped back from my young self to again, occupy the moment. While I tried, and even took my now ex-spouse there and missed the last tram by minutes, I have never been to the top of those mountains again.  And I thought of the boy with the rifle.  And I was deep in thought of all the mistakes I made, but then I snapped too.  I was cold. 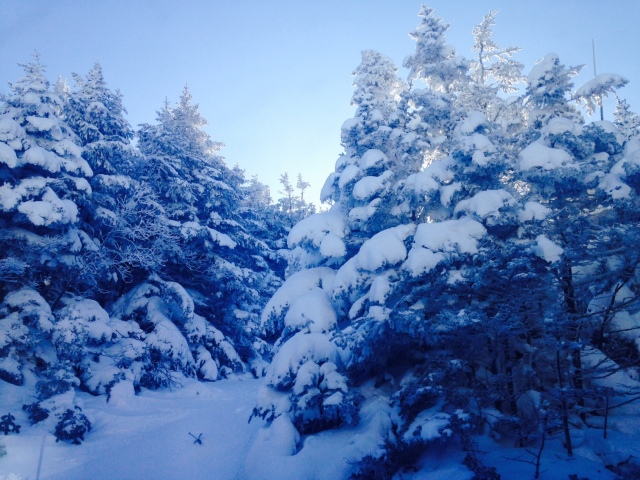 I was on a tram, in the cold, deep into New England.  And here I was, under-dressed.
While the winter in the New Normal burns hot and cold, this particular moment was experiencing the cold or some arctic blob or prolapse or outbreak or Dramatic Shift or vortex or clipper or Somesuchshit or Bomb Cyclone or Winterasweknewit.  According to the Googles, it was -9 degrees Fahrenheit which is like -77.9987 or Celsius and the wind at the top made the wind chill Oh God I’m Dying.
I considered this monument as our happy carriage crawled up.  The view was occluded by ice and smudged windows but the blue ski and sun shone on the mountains, and we could see through the open window for hundreds of miles.  While our companions were dressed for the weather in their ski gear, we were relatively naked since while having taken up the wintertide sport of skiing, we were on the tram to the top of Le Mount to enjoy the view and have a few rounds at the bar. 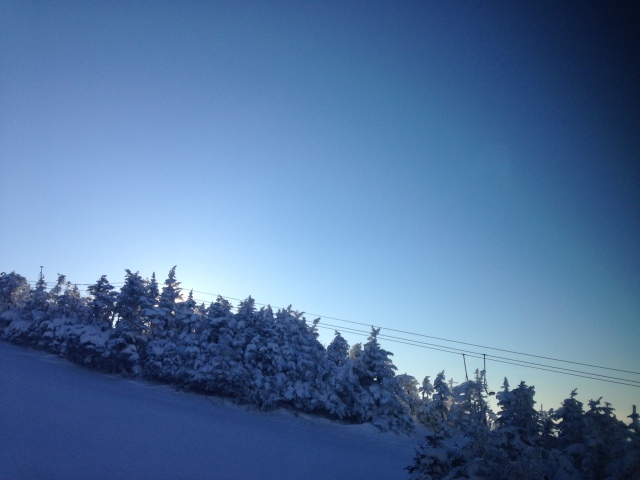 The weekend was not polite for skiing.  The previous year, before Climateglobalchangewarming, this writer had been “out on the slopes” in some frigid weather.  Nevertheless, the ground cover of snow made this adventure worth it.  This year, however, it was the scrape of toast and the pile of butter for the perfect high-speed ohshit as one raced across an ice cube only to avoid the random piles of chipped ice built by snowboarding teens and skiers from [your hated place here] that provided the best way to break some needed bone or ten in your body.  We were sitting this weekend out.  By that, I mean standing on the tram freezing and feeling quite out of place.  At the top, we noticed something about the view.  It was too ficking cold to enjoy it.  The wind was sheer.  Outside even for a moment, the cold was painful and enjoyment pitiful. We retreated to the bar, to the warmth of Hot Toddy and conversation with the stone-faced but good natured locals of New Hampshire, who unlike their bearded hipster Vermont cousins were broad strong jovial men who drank and swore, rode motorcycles and said, “ayah my best wipeout was when I cawght my tah gahrd on a wahire ahn spun about, got up and said, ahshit, I gota’ to get out ah here before the cahops get here.”
Then it happened.  The curse of thinking about Sinai, what was I thinking, these old memories, the years, the mistakes, the damn mistakes, that time I tried to return and missed the tram and god so angry with myself, my now ex-spouse, my whole life and then a shuttle of feeling tremored across me… I was cold.  I had burned my fingers having touched the door handle with my naked hand.  I was warm at the bar.  “Huh,” the bartender exclaimed. 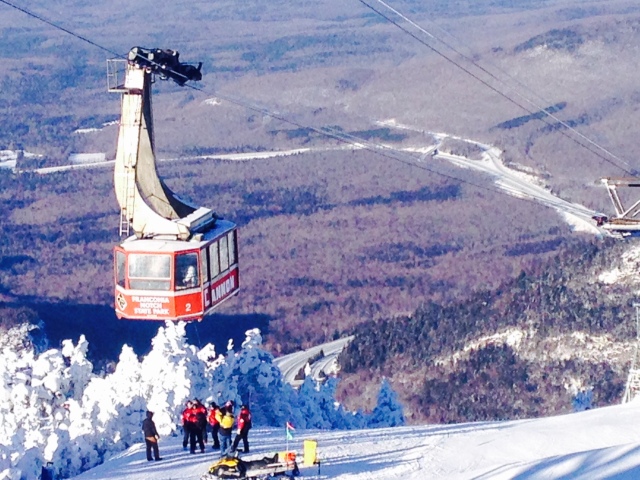 We waited.
“Huh,” he said again.  True New England timing.
“The tram isn’t moving.  It hasn’t moved in fifteen minutes.  This can’t be good.”
Then the jokes of who would get eaten first started and continued for a time until it was clear that the tram wasn’t moving.
Then the staff settled that Nathan, a small and tender lad of perhaps 19, was to be eaten, since he was, as they agreed, the most annoying person to work with.
At first we had ample company, the bar was full of skiers, but as they warmed up, donned their gear, and left, the once crowded lodge became just the staff, and a shuttled, and frightened number of sightseers all of whom were as we, not dressed for survival in this weather.  Minutes turned into fifteen minutes.  Fifteen minutes turned into three or four sets of fifteen. 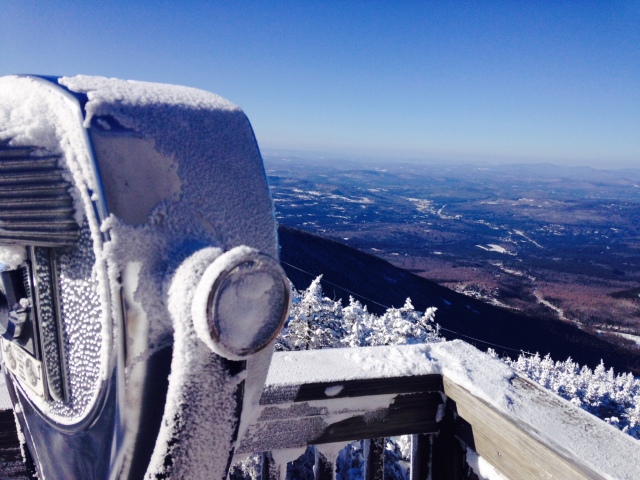 Then we had hours. And then activity outside at the Tram as the unlucky members who were themselves returning from sightseeing were lowered by some rope to safety.  Five souls were rescued and were to join us.  We again waited for word, and it came that we were to be all rescued by the machines skiers call groomers.  Groomers for the unskier are large machines with treads like tanks that drag behind them fishtails of some complex mechanical nature that exist to restore the surface of trails after thousands of skiers scrape and pile as they are wont to do in the course of a power day.  The survivors of the tram were loaded first, and we followed, stuffing into the cab clearly not intended for passengers. 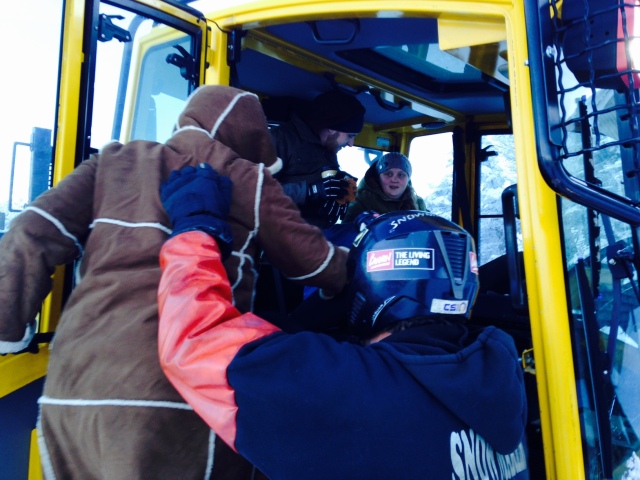 Down down the mountain, we crawled.  Face down in the most majestic way until the bottom where we saw that the day was a little more exciting than we knew since a companion tram, one headed up the mountain, was loaded with passengers hoping for that “last run” who had to one-by-one be lowered by the same rope method yet this time surrounded by a certain amount if not all the emergency teams and machines for the local jurisdiction.

Directed as if evacuated from some war zone, we were pushed into the lodge, offered those blankets you see in disaster movies, food from the cafeteria, and some compensation in the form or day passes.  We took stock of the situation. The mayhem.  The commotion.  Gathered our passes and made light to the car, to flee as the news vans arrived.  No sense in being quoted for being stuck at a bar for a few hours.  I mean, we have been stuck at a bar before.  (Out of the time, Obama trapped me in a bar….)
New Hampshire has a long and storied history in the development of skiing and a ski industry in the United States.  The now broken tram had been the first in the nation to transport skiers, and that and other innovations now were lined up on shelves and in cases at the Ski Museum next door.  That Vermont has stolen that early shine is a mystery, but I will leave that story up to the historians and other interested parties.

We had returned to life and everything was OK.
For me, the mountains will call again.  And I will return to the tram.  But I will wait for it to be repaired and not a thing at all, even once, of Romania. 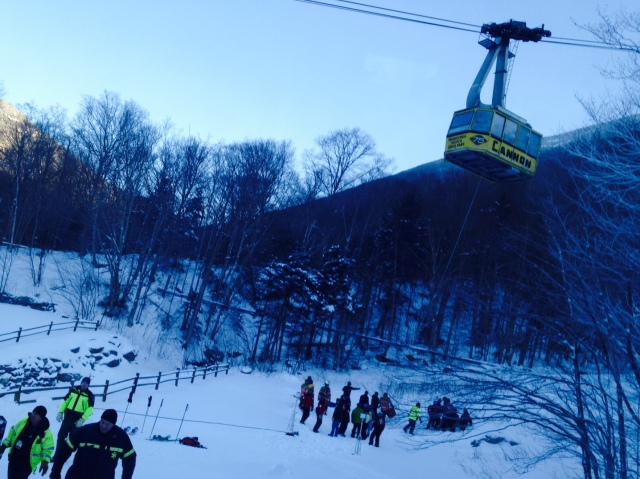 Air can hurt you too – Taking Heads.