Nothing Halloween Can Stay

It is a quintessentially American holiday.  Perhaps of Celtic origin, or Hispanic, or Latinate, or Germanic or just invented by the candy companies, it has grown in popularity and taken over other areas of the world as an expanding meme.  Perhaps this of all holidays in the United States is the one with the least amount of controversy, the least offensive to special interests, outside of course to those devoutly religious, and even they seem to turn a blind eye. 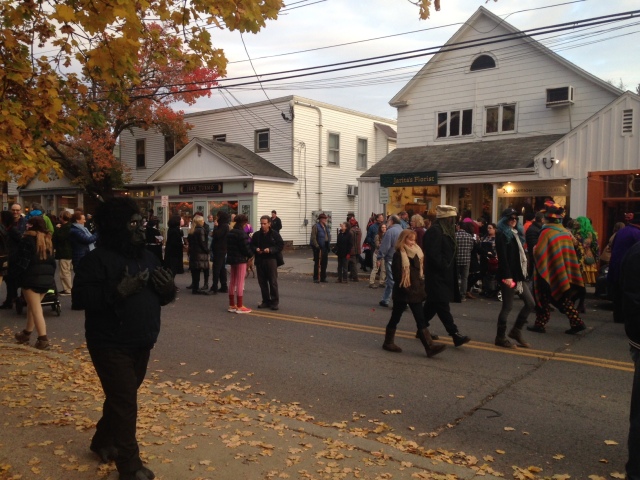 When I was young, a hundred years ago or so, Halloween was a holiday that children (and gay men) started preparing for as soon as there was a tinge of colour in the trees.  That has not changed, although the commercialization has become more intense.  Then, when the air took on that autumnal odor of plants exhaling for the last time and the yet to moulder leaves were still damp and mostly still attached to the trees, before the clocks were set back, we would start planning our costumes, the route we would take, what our sack would look like, and all details.  Then, started the nightmares.  Halloween nightmares, each one the same.

My in-my-dream child me would be in some location of fantastic proportions.  A part of town I had never seen.  How did I get here?  Why was I here, who were these people?  I needed to get home at once.  I needed my costume.  I was missing Halloween.  I fumbled with my mask, I looked at the time, and I was late, I looked at the calendar, how did I sleep until November 1st?  And then, I would wake up and look at the calendar (kids, ask a parent what a paper calendar was and how it worked), and count to make sure that I hadn’t experienced some time warp.  I find talking to people, that this is a common childhood nightmare and one never repeated for Christmastide, despite the wealth and diversity of material goods provided upon that latter and more Holy Day.

In those days people raked leafs and into piles, children jumped into those piles, then old men with hair in their ears burned the piles.  Children ran free in those days and we trick-or-treated in clusters and packs with parents often far behind or not present at all.  Then, there was the Tylenol Scare(TM), the Devilworshipingdaycarecenterdirectors, and 1800LAWYERS and before we knew it we were tethered to a parent/caregiver/guardian/warden and candy was inspected for pins, heroin, razor blades (the disposable razor was yet to really take off), pills, candy with little pin holes in the wrapper, homemade candy that contained nuts, pop rocks and soda, and all manner of danger.  Halloween became, as I exited childhood, full of curfews and was made organized and regulated as all children’s actives have become in this American life.  I was glad to have lived during what I considered the waning Golden Age of Trick-or-Treating.

It took some time for Halloween to recover, but it did.  The holiday expanded into the adult culture in a greater and greater way each year [this author presents no statistics to back up this claim].  By the time I went to College, the Halloween party had become a costume pageant and not just another beer blowout and as in childhood we planned our costumes and route and all other elements down to the minute, although I must admit I did not have the “I missed Halloween dream.”
It seems that centers of Halloween grew in the nation such as New York City, and the Halloween parade spilled out of the culture of Chelsea and The West Village and into Mainstreamamerica where other communities took on this expression albeit not matching the volume, madness, or intensity of the original. Other locations took on the parade and discouraged trick-or-treating as much as they could.  The activity of going house to house in many places has become woven into a more formal affair of a parade or “trick-or-treat the merchants” usually one of the few times people are willing to visit their historic downtown or Main Street.

This guided activity that may still allow for a certain amount of mayhem, even if the police are in ample numbers and watching least citizens exceed the boundaries of an increasingly limited socially acceptable behavior. In time, this is a good thing since the eggs and toilet paper of the Teenagers was never a welcome aspect in my childhood and by the time I was a teen it was too dangerous, what with satanic child molesters the zero tolerance police, to engage in similar activities.

In the hamlet of Guitarville, a simple and storied collection of quaint structures aligned on a former stage run, the parade is situated about the Village Green.  The many police of the village cordon off the road and mingle with the crowd as children of all ages run from treat merchant to treat merchant.  As in Gotham, adults take up the costume call and since the village has a higher proportion of artists, many of these costumes are constructed with an inspired eye as they are executed with technical skill.  During this event, the streets and lanes are lined with parked cars but absent any youth begging candy from the many shuttered doors as this practice has been long abolished and soon to be but a memory lost in the shuffling iTunes of so many millennial playlists.

Nature’s first green is gold,
Her hardest hue to hold.
Her early leafs a flower;
But only so an hour.
Then leaf subsides to leaf.
So Eden sank to grief,
So dawn goes down to day.
Nothing gold can stay. – Ferguson