The City By The River of The Monks 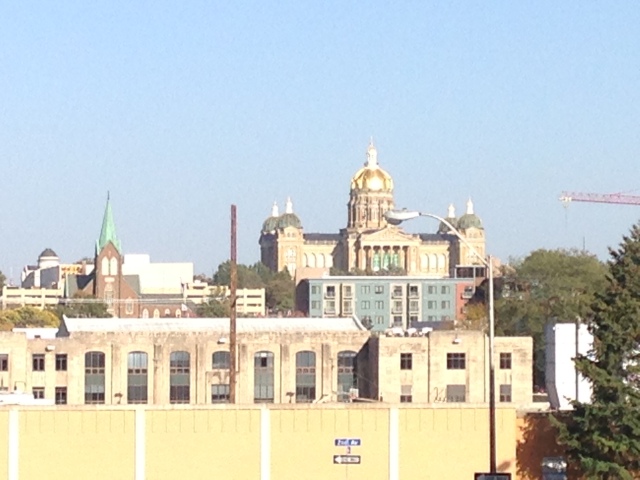 It goes without saying that New Yorkers have a lot of nerve.  And that it is a truism that the Midwest fed Gotham a great many non-conformists, alternative lifestyle-ists, and the fresh supply of meat for the various meat markets or wherever there was a shortage of blonds.  Today, that has changed, as has the Midwest. 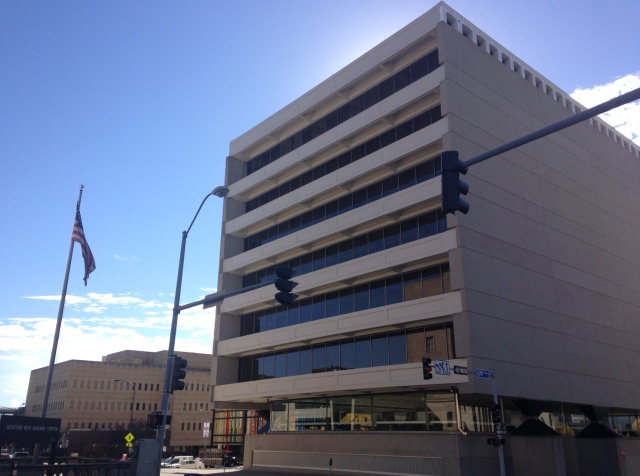 Living in Gotham for most of my years topside of the earth, one meets people from elsewhere.  In the city, friends can come from a number of points on the globe and at times it seems a contest among a certain class of educated folk to see who has the most diverse friends within their group.  If you collect enough, you get a free coffee or something.  Gotham indeed is the city of transplants.  More so since most of the native sons and daughters are either ensconced as the scions of high society or populate the large and vast unnamed and altogether Eldritch underclass and who live in neighborhoods unknown to even the popular websites and various TimeYelpOutNYGothgawamistker.com’s weekly rundown of eateries and events.
Then there are the friends from the Midwest.  Or perhaps you are from the Midwest.  To be “Midwest” in New York City is to forever be the cultural informant to everyone else.  You have to explain or be a representative of what “people there think.”  At parties, you hear, “sowhatdopeoplefromwhereyouarefromthink?”  Or, if you take a step back and say you don’t know because you have lived in the city for two decades, they then say, “oh but you got out” and then look at you not as a fellow citizen but some escapee.  Time and again, to these comments, your reply must contain a quick compare and contrast of Brooklyn, New York, and Brooklyn, Iowa.  It must be tiring.  I am not from the Midwest but having been espoused to a Midwest transplant for about a decade, it was certainly tiresome to hear as an innocent bystander and I can only assume it is a real pain to never shed that moniker of Midwesterner. 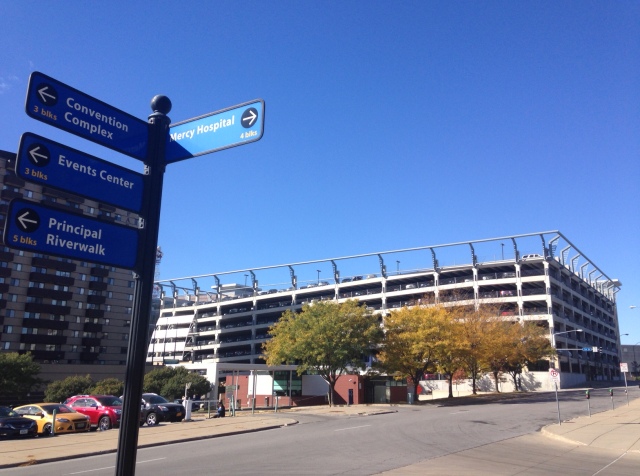 Des Moines is for many the epicenter of that Midwest.  In the minds of many a New Yorker Iowa is remembered but once every four years and with shrugs and snide jokes about farm people picking the next president.  It is seen as a part of the flyover.  The flat city containing a flat collection of buildings and people, all with similar ancestry, as if this is something that detracts from the human experience to share some unity, even if distant and tenuous from a gnomic perspective.  True, the majority of people of Des Moines yet share common recent ancestry of about 65,000 years or so, but if there is any nobility to diversity and balkanization, this condition exists too in the Midwest and certainly in Des Moines.  The insurance companies have shipped in Indians to handle the call centers, Africans run the taxis, Asians have opened up restaurants, and various Hispanic/Latin/o/a/um peoples have settled in the area to create a similar tapestry as elsewhere in the United States of America. And true, the city that once rose up from the prairie with grand Greek and Roman inspired towers has been for the most part demolished and turned, as so many others that took shape from Urban Renewal/Removal, into a network of single and multiple story parking lots and yes many a neighborhood was imploded to allow the passage of so many highways to allow access to parking lots, as God, apparently, intended.  The city currently is a patchwork of completely cubed buildings and sections of hot and dusty parking lots, but not unlike American cities the world over.  Some buildings appear to be entirely windowless. 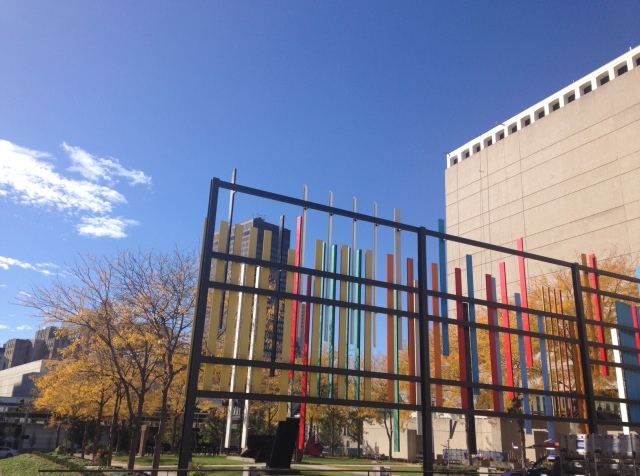 Among the remaining edifices of old that remain are the cement towers and monuments to current industry.  A set of bulky artless Neo-Brutalist buildings shoved together and surrounded by streets that are more moats of protection than passageways of movement.  Sidewalks are for the most part devoid of pedestrian traffic and downtown has an atmosphere of harsh edges that must bite ever harder in the deep and dark winter.  These new buildings are indifferent structures built by the likes of I. M. Pei, Le Corbusier, Ernő Goldfinger and other criminal minds who believe that enough cement and tinted glass can solve all the messy elements of the human condition.  These silent machines and are fed their occupants each day through skyways connected to the parking lots shielding all from the elements and whatever happiness a summer blue sky may bring.  From my hotel, I had a view of the downtown and each morning watched the same line-up of cars in the morning commute ritual unfolded the little toy cars lining up in the many parking garages exactly the same as I had seen the morning before and perhaps as my grandchildren will one day witness… as long as they don’t tear down the Holiday Inn by the medical center or run out of oil. 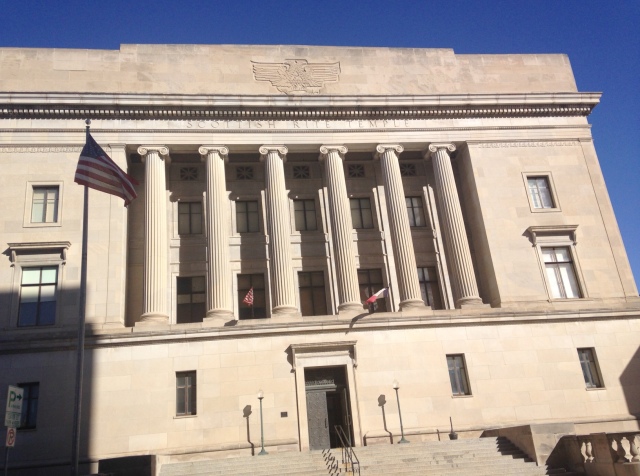 In the city of a thousand places to park, there are pockets of what appear to be Brooklyn.  Trees on the sidewalk and the planting of various grasses that have magnificent blades turning blond in the autumn wind and knocking together as bamboo but with that hushed whisper known by the first native peoples.  There are gay bars as in parts of Gotham.  Eateries with extensive expensive entrees and sundry bars with clever punny names ranging from dive to douche.  Music venues aplenty and creative arts spaces a few are clustered and hidden throughout the city.  Museums here and there and science halls in certain and singular locations.  The ossified and haughty view of Des Moines, and the Midwest in general, as Flyover material, as devoid of any creative or active life will persist since there will never be enough as what we may find in Gotham at any hour, but for the people who live “out there'” it seems enough. 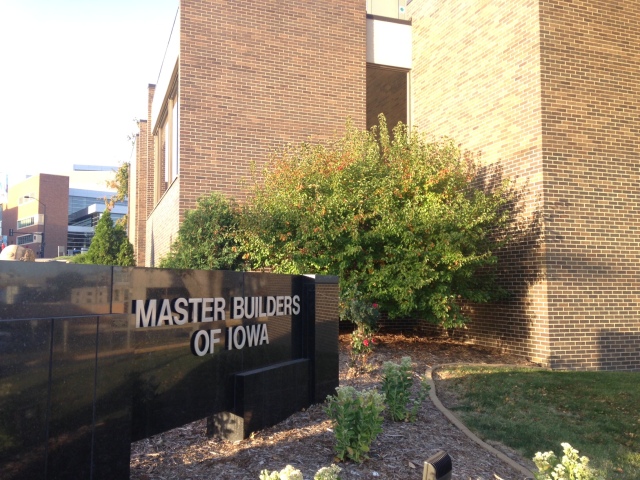 That there is no culture is not true today, and actually was never true no matter how European-American the Great Prairie ever became after conquest and expansion. Just ask the curators of the many museums from Springfield, Ohio to Omaha, Nebraska.  The lists of artists of all stripe as well as the many opera houses built even though these have now bloomed into ruin. But today the idea of the Midwest is a stereotype so solidified in the minds of so many in the country, and especially for New Yorkers, as to verge upon parody.  This is understandable because it is hard to give up a stereotype, especially if you went to a good junior ivy school, make more than 79% of the population, live in a one-bedroom on the Upper West Side, like Ethiopian food with spices the “way the locals have it,” and are married to a gender-fluid spouse who you met in Korea/town.   Des Moines cannot hold a candle to that toxic mix of energy and frightening rent costs as Gotham can offer.  However, in quiet spaces and in so many ways, even the boring but dormant streets of the vacant downtown, the big open sky looks down on a new city with so much potential.  A city that as others in this Great and Storied Land, looks so much like America.  A golden dome shines out to all.  Perhaps they will rebuild a new city.  Perhaps it is time we looked again, to the heartland for some inspiration. 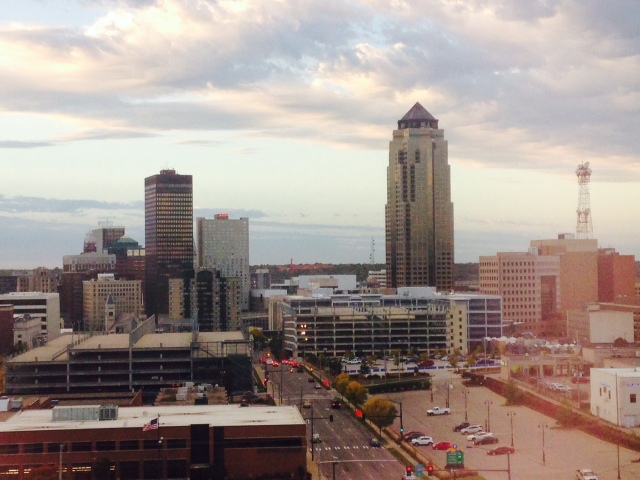 2 thoughts on “The City By The River of The Monks”