The Camel’s Hump is way north. Almost on the Canadian border in many ways, and well past the resort towns and villages of Manchester, Vermont and Killington. The area about the mountain is yet wild, so much so that it makes the area about Stranton mountain appear downright built up and overdeveloped.
Our little hiking group is comprised of persons of various experience from zero to novice. This writer had not embarked on such a journey to-date. The trip involved mapping out the route, making park arrangements, car arrangements (important for through hikers and having had so many poor or car free friends limited my range in the past), and hotel arrangements. Maybe simple to many, perhaps second nature to some but arranging for a camping trip is not a simple affair to most. Food, water, shelter, safety and in this modern age, timeliness so we all arrive fresh-faced at our respective jobs least we are docked our pay or terminated since New York State is, as are most, a right-to-work-state and one can be “let go” for any or all or no reason.
This camping s hit takes some serious planning and guts in this day and age. Despite that REI and EMS and Cabellas and Dicks and Gander Mountain are all full-time selling new technology that allows to travel in greater comport.  I imagine we are the last generation who will be allowed or even can “rough it” in any way.
Our first stop was the resort town of Killington where we rented a condo. Three bedrooms. Fireplace. View of the mountain. Balcony on the upper floor from which we watched the shooting stars. For a moment I sunk into the feather bed and wondered about the journey ahead. I love you feather-bed.  Oh bed, you feel so good, but I must leave.  Why? Were we really going to do this?
The next morning out party awoke. Leisurely we started to pack. Still an hour from the trail head but no rush. It was a Saturday. One of our party had never hiked or camped before. Ever. In his life. I had looked at the maps but… Another member of the party had forgotten to print them out and in the 40-70 hours each one of us works, it is understandable how we can miss little details.

Reluctantly, we dislodged from our… Uh… Lodging, and set out to drive up and up and farther north. The trailhead is close to Mad River Glen and the ski lodge of the same name.
Up up up up our little car chugged. And up up up up the second car followed. We crested the mountain without any effort on our part, we just sat there and let the baby dinosaur juice pump through the engine and explode us up ever higher. At the parking lot at the top we saw a number of visitors, view enthusiasts, cyclists a plenty, but no tent-baring back packers. No wooden signs. No gates or markers or anything to justify that out journey was to take us on the fame and fabled Long Trail. Nothing but brush. We were pointed out the trail by a cyclist.
“There.”
And, there it was but a break in the trees nothing more than those creepy patches of forest at roadside stops where drivers go tinkle in the woods.
So, two drivers abandoned the rest to start the trail since, our dawdling had left us well beyond the sun’s zenith. We drove to the second parking area. Our destination. And it was further than I expected.  We thought, we just left the least experienced of us to ford ahead, locate the camp, and tent up, and we had yet to buy maps. Which we did.
We parked the second car at the end trailhead and returned. The road was worse than any I have experienced. Washboard that led to dirt.  But we drove on and then up up up up and parked the second car…. Or was I driving the first. We donned our packs, mine was the kip bag, his had the fire making equipment, and we swigged a little wine and pressed on into the cleave within the brush…
And at once were in the forest. 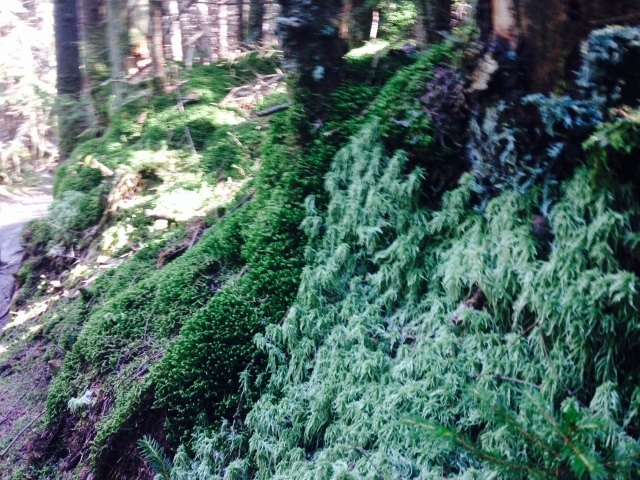 Primal. Forgotten. Layered and a sudden quietude although for a time we still could hear the rankings of some fat Harley pipes and the above drone of a pleasure airplane.
Up we pressed on until it felt my heart would pounce out of my chest.  After days of inactivity, weeks of less than stellar gym attendance, hours and hours in a car, this mountain was no joke.  We climbed up and over rocks and moved quick with I having to rest from time to time as I felt rather short of breath and ill out of shape. We two did continue to attempt to catch up, perhaps pitiable puerile hubris but it was the gaunt green flame that fanned our spry fortitude so early on in this journey. From one vantage we saw our destination. The Camel’s Hump.  It seemed so very far away even as the crow flies and indeed it was since between us and our treasures goal lay valleys and some additional humps of note.
Then it grew twilight.
Then dark. 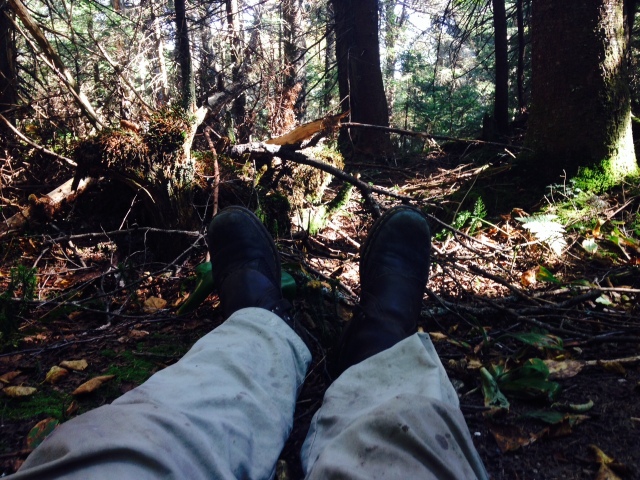 We lit lanterns and set them upon our heads and pressed on.
Finally, the forest opened up to show a fairy tale cottage of there closed sides – a lean to. Not of such as I built as a child of branches and twigs and I would lay there shuffled in from the snow with a cat or two tucked in my arms, but hewn logs placed long ago by my ancestors who pushed that Long Trail above the trees where natives tread not.
Our band of novices had well beaten us and were upon the wine and some cheese much perhaps to the chagrin of the campers, the normal campers, who had normal gear and planned the trail so as to rest well before the ungodly hour of 8pm. Not us. We moved into the woods and flitted open directions on how to pitch tents, opened instructions to stoves, as well as opening more wine and Of course someone brought Fireball(tm).
We feasted on beef tenderloin, mashed potatoes Alfredo, and snacks and wine as we may be campers but why not enjoy unplugging from the world in comfort, especially since tents and sleeping bags have come a long way but camping food still tastes… Terrible.
And to sleep and rest we went in pitched tents and the lean to and slumber was not in he feathers and comfort of the morning but we had made it. To wilderness to away to unplug from our lives and so many engines turning and the intertubes churning and we listened to the whistle of the stars – and the sonorous breathing of this author.