There are many markets out there. Day markets. Night markets. At one time each village had a town square and on a special day of the week all the makers in the land would convene to bring their hand made transmographiers and artisanal turtle jerky to let it fester in the sun.

In time, these markets were covered affairs made sanitary and no longer an occasional affair but keeping regular hours and often every day of the week. The age of the sanitary market began.  Stalls. Vendors. The chaos of the fair and carnival was tamed, there were hours of operation, bathrooms, even windows to keep the flies at bay and inspectors to ensure some hill billy wasn’t poisoning the population selling Ebola infected bush/street meat. I’ve seen these markets in Mexico, Peru, Russia, and Detroit. Smaller versions are cropping up as millennialists and Gen XYZ-ers turn to Slow Food, backyard chickens, and scrim shaw door handle production as a more fit lifestyle that yet allows for social interaction among friends.
Then there is The Public Market in Seattle. It is a little of everything.

The more favorite child of urban renewal and what the failed South Street Seaport (SSS) wishes it could be had the SSS it not developed a bad drug and Sharper Image habit. The Public Market is both old and new. The old is that it actually was a market since Hector was a pup. The new is that somewhere in the pink colon of the 1980s maybe early 1990s it was retro fitted, ADA’ed, and reinvented as a mallish beast of many levels and pumped up into a tourist attraction.

Yet, there is a true nature to the place that come through the murals, parking decks, and bright banners that afflict most places of commerce and one can still ample along wood floors and ramps and see the layers of history and neon signs lit along the way.  The Public Market may have bobbles and restaurant brew pubs, but raw food is still at the center if the pageant. There is fruit and vegetables plenty as must be at any market. Piles and delicious piles as far as the eye can see of the best produce. Flowers so cheep and plentiful – a benefit from being restively close to California’s still fertile lands and ample supply of refrigerated trucks and drivers willing to pilot them. 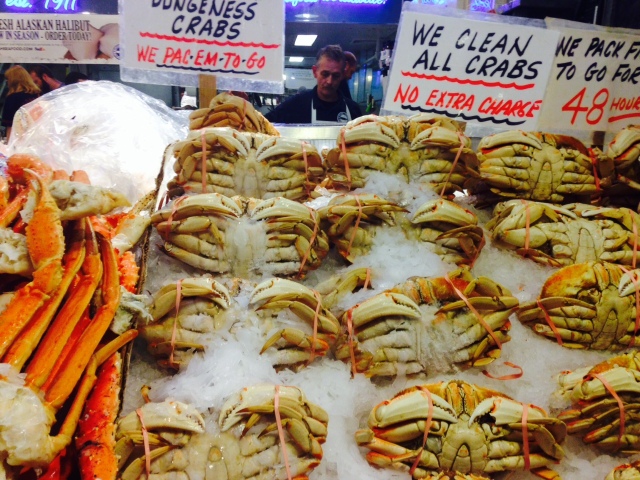 Fish too were represented.  Great piles of overabundance.  One fish, two fish, red fish blue fish, all on ice and staring into eternity proclaiming “enjoy the oceans while you still have them.” There was this one fish place which was made famous in the film Sleepless in Seattle or perhaps Cocktail or Big Fish.

The fishmongers have a routine of sort. Like the show Stomp or The Blue Man Group but not blue not involving trash can lids. It seems that after a fish is bought the wo/men take to yelling and tossing it from hand to hand, high up in the air, then let the fish crowd surf, make it dance in some ritual or other from the Days Of Yore. Or maybe not as we never saw this happen. A crowd had gathered and was maintained throughout the duration of our visit all waiting for this spectacle – selfie sticks, iThingies at the ready, old digital cameras held high, but none wanting to buy said fish in order to initiate this mechanical Rube Goldbergian POS packing process.

The Public Market also has shops selling things you can’t eat and stuff children will attempt to swallow. Polish Tupperware for grannie, magic tricks for socially awkward kids, clothes and lamps and tee shirts and antiques and junk of all stripes for Hipster and any remaining Grunge kids all growed up. Each level was a wonderful avenue of so many shops and the crush of people relented only in certain far flung areas where the shops more eccentric and I can only assume the rent cheeper.
While the fair gave birth to the market, which in turn sired the Main Street and then the mall, the Union Market is not just a mall but a unique spot on the map and perhaps worthy of the attention given to it.
Not that this place isn’t home to the first Starbucks…
The Queen Alien of egg laying poop sucking replicant coffee houses.
So. There’s that too.