There and Back Again to the RenFaire

Huzzah!
There was that word again. But, this time close by the forest. Whist!
Huzzah!
Yes, that sound is again I remember it from long ago…
Huzzah! That’s the call that sends wallets scrambling and kids running and adults groaning. It is none other than the Mediaeval Faire, the Renaissance Faire, or RenFaire.  a gathering of various tribes and shires and kingdoms and nerds and those young girls who brag about being nerds but have more boobage than they show off complex knowledge about archaic subjects and these wenches would look good in any age’s attire from jorts to whatever those Restoration Era dresses are called… or elf clothes or… Spandex, Heaven Doth forbid, even though these wenches know that tights aren’t pants, but Huzzah!

The RenFaire has a long and storied history intertwined with Raceclassgender I am sure, and perhaps dates back to 1957 in the United States or 1248 in Europe when the first RenFaire sold the first 5 ducat corn dog and a Lord asked some costumed interpreter which way to the Privy. And since then… Nothing has changed. I mean nothing.

1978 or 1979 this writer attended the first in my life RenFair. It was on Long Island on an old estate that had been built long before to resemble a castle and then was given over to the Parks Department when the rich refused to pay the then brand new income and property tax.  Wedged between the faux fortified manor and the crenelated garage was the faire, a fantastic spectacle for this me as a child and all many other children, now equally older by their own measure and temper, to behold men as knights and women as ladies and all manner of argle bargle that was more or less historically accurate if men hitting each another with wood sticks wrapped in duct tape made to look as swords was accurate. In those days it didn’t matter.  It took weeks to develop the photos from such a day and by then we had forgotten that all the facts didn’t add up and just remembered a blur of Huzzah! and queens and kings and knights and ladies in waiting and all manner of huge snacks we could ill afford and from that day we yet retired sunburned sated and happy for the day.

The last time I was to a RenFaire must have been 1984. Let’s pretend it was. So …. Math …. That’s about 30.5 years since my last visit and Huzzah if it wasn’t like stepping back into time, if not at least 1980s America.
The set up may have changed in position. I am sure many of the older structures have melted away into time. The actors of living theater were young but here and there some old faces that reminded me of times passing and I questioned – were these the same lord and ladies as had entertained me so long ago?
And on que, a gent performing in Robin Hood’s Forest introduced himself and showed off a brochure upon which he made note of the photo of him and his child assistant and how thirty years hence this child was all growne up. Today a man not much younger than myself. I winced and smiled trying to keep the smile on the outside but the wince within. I doubt I was successful but the combination may have seemed more a constipated face for he did pointeth me to the privy deep in the glen. 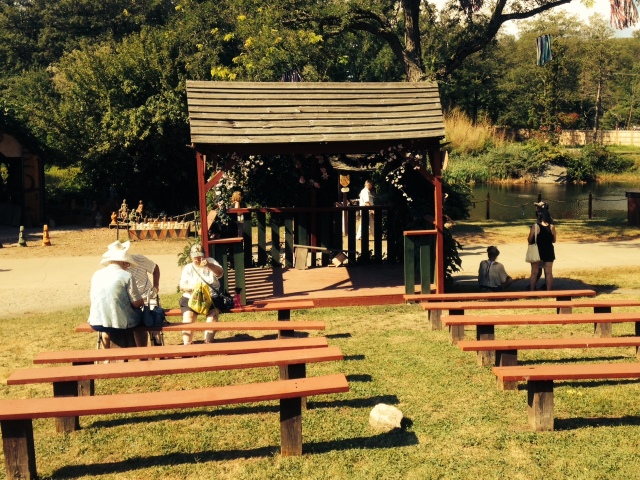 The RenFaire unfolded as it had and has and will. Vendors selling those leggings, that glass, those coins, the candle that one can replace candles inside so retain the decorative part (we owned three of these and still have one in the Room of Family Heirlooms**). We wandered. Our party consisted of familiar siblings and newly produced relations, small children here to be impressioned with the to them new tastes and sounds and sights of all the well choreographed hubbub. We Elders took upon to the noggins of cider, something this blogger had of days yore been unable to partake.

The fire juggling show. The wench show. The bird show. The various distractions and hit the this or toss the that.
In all, I am sure there is a deeper and more chompy take as a takeaway; about the similar crowd being in attendance, gender roles of Lords and Ladies, a slight sexually deviant undertone that exists today that either was not extant then or my lack of awareness within a childish mind unblemished by hormones and naughty thoughts and angry words was unable to describe and therefore was unable to see.  The RenFaire once an anachronistic revival of a culture once gone has itself ossified into a tradition of the gathering so plotted out as to verge on the orthodox communities of Jew or Christian who yet walk to temple or harvest fields by horses.

And why not in a world of change for the sake of change and the angry voices so offended and hyper-activated by a streaky stream of daily digital diarrhea dribbling in various devices that we cannot take a break and just enjoy a day – of Lords and Ladies and Knights and the same vendors as you knew back then and who you can now introduce to the next generation.
And from the rolling fields of the Faire we left behind those stalls and acts and returned to the glen, to the parking lot and back to Social Media, sunburnt and full on that turkey leg, and mead, and bier, and something on a stick that was fried, and having spent everything in our wallets and I thought….
Well… Huzzah!

** The Room of Family Heirlooms is a real place.