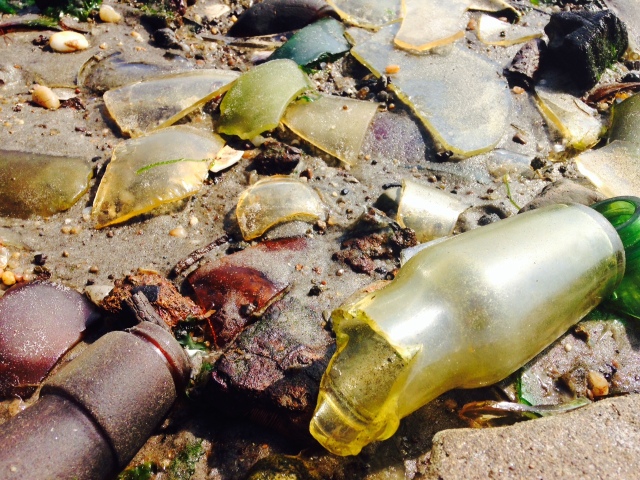 There are many strange places in this rich and blessed world, but perhaps none so ample with souvenirs as the former horse and fish boiling region of Gotham now become an exploded dump cum state park called Dead Horse Bay (DHB).  Situated in the middle of nowhere, somewhere where only buses with unknown numbers run, DHB is a long road taken in order to visit a rotted section of the city.  Should you venture there without the bike that was stolen last Saturday night after you got drunk at Sally’s going away party, or you lack a ride because your roommate totally bailed on you since he unexpectedly needed to use the car to transport his girlfriend’s cat upstate to its final resting place, prepare to invest some part of the day just getting there.  While remote by all public means of transportation, this site has become increasingly popular in the years since the internet, and more pilgrimage out there with tour groups called Hidden New York, Missing New York, Dumps and Dead Water or such but fear no more, there will be plenty of dump to see even if we all take a few bits home every time we go there. Indeed, while there are many tracts written about this spot from the historical tracking of the land from pristine waters to polluted wasteland, anecdotes by bloggers (this writer I assume included), and high-speed photo essays, you kinda haveta gothere.  None of this can in this case substitute for the real experience.  Of standing there and listening to the waves as the tinkle the glass, an endless massage of the ejected effluvia and discarded objects as one breaths in the fumes of low tide and contemplates the arch of human history and any and all personal errors you have made in love, career, and diet. 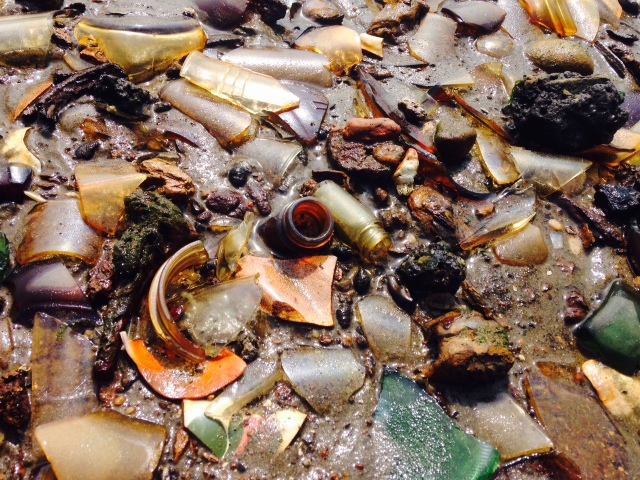 Much of these bottles are broken.  Some patches are just the necks while in collections and indentations there may be a collection of intact bottles looking strangely new, as if these things were just placed out here the day before.  If you like beach glass, those bubbles of glass well worn and appearing more as transparent stones, don’t come here.  The glass has not been rubbing on the sand long enough for this to happen nor are the waves as violent as may be needed.  There are several picks our there in the muck. 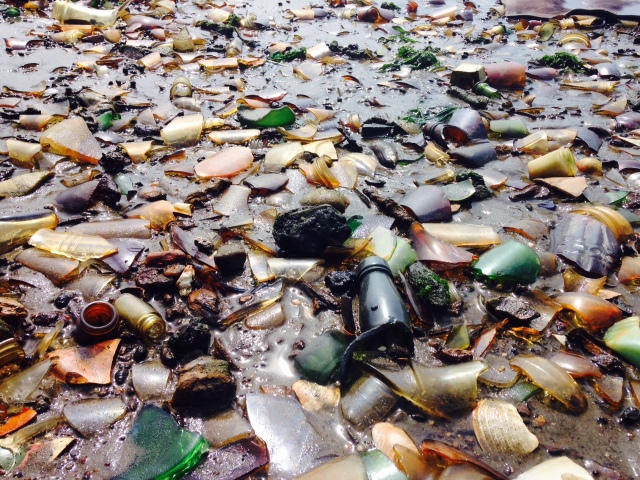 Our party of pickers swept along the coastline.  One member of the group at the outer edge by the water (low tide), one in the middle area (where the most erosion has revealed the majority of the bottles, and one on the dry sand.  The question of the day was “how about this one?”  It is hard to say.  One looks much like the other after several minutes of picking and it is hard to know what separates one find from another outside of narrowing down the search to only fully intact bottles… unless there is any writing on the bottle identifying the brand, bottle make, or former contents.

Among the glass there are some metal objects.  Some are larger, safes, machine parts, a great deal of pieces of plumbing and heating systems, electrical work, and a good amount of spark plugs.  The salt in the ocean makes short work of these items and many are rusted lumps of unknown form and former utility.  Here and there some items of stainless steel are to be found.  Mostly forks and the odd pot top.  I was actually surprised that there was a representation of metal in this midden pile since it was even then valuable.  I can only imagine that those items today assembled on the shoreline in one large rust farm were small odd bits not worth hauling to the scrapyard for a few cents. 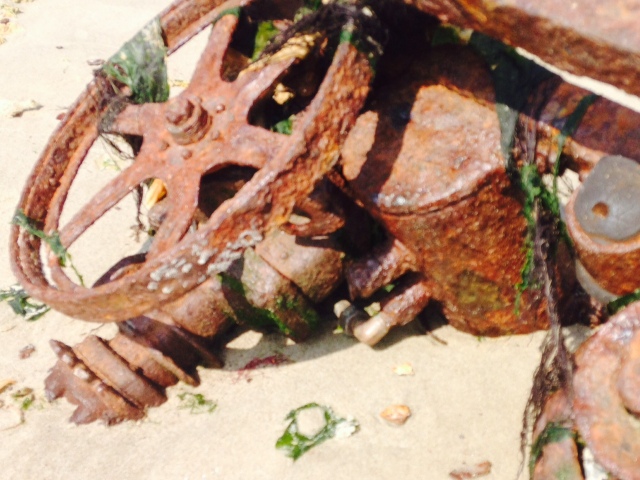 There is a certain amount of plastic on the beach too.  There is the native plastic of today that washes up and mingles with the older items.  Plastic water bottles, crisp wrappers, Powergatoraidrinkbull containers tossed aside by amped up boaters and hyperglucosed children munching on needless snacks by large and dank storm drains.  But then there is the plastic of yesteryear.  Back when plastic was the future.  While the dump was closed in the 1940s our species was still well underway to reform complex carbon chains into viscus material capable of assuming any and every shape.  Shoe soles are in greatest number of this material, but there are other products represented.  Chunks of flooring.  Nobs and other bits.  Back in Those Days many buildings had trash chutes that fed incinerators.  When I was young I still remember the incinerators coming to life and a fowl cloud being ejected from certain featureless buildings.  A good number of plastics may have been fed to these furnaces and then dumped as ash here on what is today a beach.  Those bits not burned, have been assembled here.  Unfortunately, no one is interested in this material as it is bottles, and bottles alone, that draw the visitors. 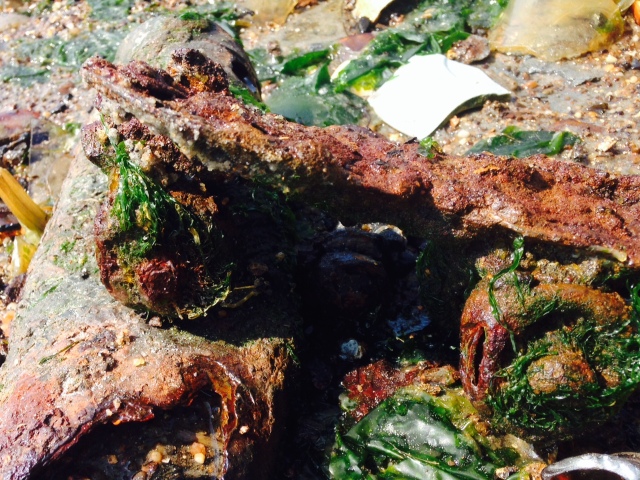 A woman approached us and identified herself as Liz.  In her hand she had a Pepsi bottle that retained some of the label.  “It’s not my style” Liz said.  She was picking up a certain type of bottle, she did not expand on this, in order to make shadow boxes she would then sell on Etsy.  One of our party, enquired as to the name of the shop.  “I haven’t set it up yet.  I am just out here getting materials,” Liz replied.  We each secretly hoped that Liz would go through with this project and not just wind up with a box of dirty glass shards in her closet or perhaps one of the many mini storage units where Gothamites store their crap.  We took the Pepsi bottle and thanked her.  Pepsi bottles are indistinct without the label.  You have to be a real bottleopologist to identify one.  Coke, however, is a different story.  A distinct bottle came at a cost and the deposit remained long after many lesser brands broke free of the confines of reusing materials.  This and the sought after nature by pickers ensure that the few bottles carousing in the surf are but broken and shattered parts of the whole. 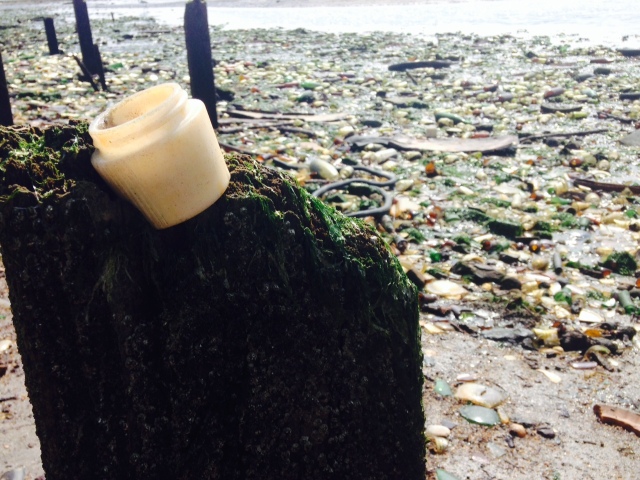 When planning your visit to DHB do check the tide chart.  You can use the one for Coney Island weather station.  You want to visit somewhere close to low tide.  That is of course when the majority of the beach is exposed and the pickings are in greater volume.  Wear closed toe shoes, certainly ones with strong soles and you will be walking on jagged rusted pooped on metal and broken chards of glass, pottery, melamine, porcelain, and crystal.  And always wear sunscreen.  The path from the bus stop (there is also a parking lot should your roommate’s friend have a car) is wild on both sides but mowed clean down the center.  Don’t touch any of the plants on the sides of the path, the majority are poison ivy.  When you come to an intersection of three branches to the path, take the one on the right.  This will lead you to dunes and you will see the marina.  The majority of the bottles are collected on this side of the bay since it is less exposed.  If you approach by boat, don’t swim to shore.  There really should be a sign out there saying such, if there already isn’t one. 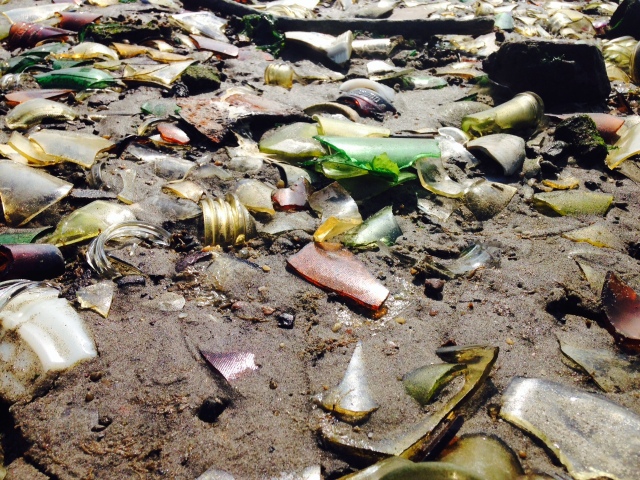 As interesting as the bottles are at this approach, it is also interesting to see who is out there.  It is a good place to break down that New Yorker fear of talking to strangers and just engage.  It is interesting to see what people take, what they are looking for, and what interest brought them to so far a shore of Kings County.  Most are just visitors who read about it in Gothamist.  Some are there for specific collecting.  The jars are the least collected it seems.  They cluster in groups.  I am not enough of a scholar of bottleriey to know if this is because they were discarded by the same consumer, or if following some rule of Ancient Greek Science, they have an affinity for one another and settle thusly. 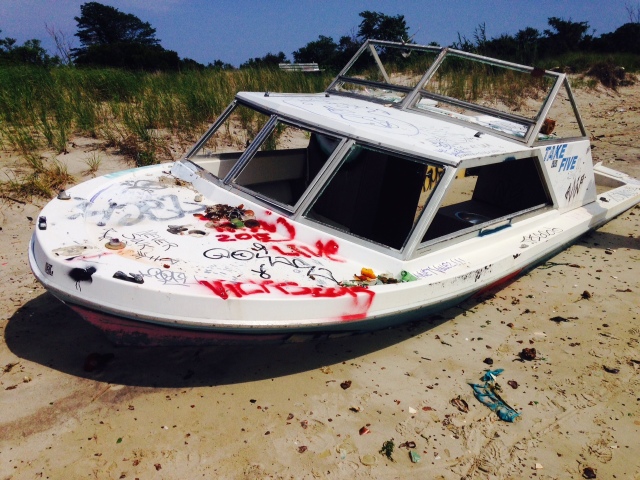 On any given day there are several pickers.  Some are serious and others, such as our party, amateur collectors.  Most sought after and therefore the rarest are colored glass.  This would be blue Vicks jars, umber medicine bottles, and any carnival or depression glass (sort of a rainbow sheen on the glass however this effect can be imposed on regular glass by being in a hot fire).  There is a vast multitude of bottles intact.  It is rather surprising considering these things were tossed into the actual literal dust bin of history, interred in a dark sandy mountain, covered with layers of cement, washed into the ocean, and then tossed up onto the beach by various storms.  Log Cabin maple syrup seem to be represented in great number either because Gotham was going through a syrup craze or because few collectors want these bottles.  Ketchup bottles of course – of the Heins variety – and a surprising number of salt/pepper shakers.  Does this speak of a rising culture of diners and roadside America?  The little bottles are intriguing.  Most are medicines of some sort while others are perfume. Their small size protects them from the elements and breakage.  The perfume bottles are highly prized by the more eagle-eyed pickers.  Clorox bottles are the unicorn.  So many are there in various configurations of broken and useless.  That day we found a competitor of Clorox, Rose-Ex, and while in the exact configuration as the famous Clorox bottle, it is even as trash, still second place to its more famous relation (all chlorine bleach on the market is exactly the same in chemical construction from the .99 no name brand to the $2.99 Original Formula Clorox(tm)).  It was sitting on the beach, left by a previous picker set up for the taking.  There is indeed honor among these pickers.

After filling a backpack, we decided that the hour had come to return home where we would clean and sort our finds, divide up the spoils of a lost civilization of consumers.  We were doing our part to clean up the beach in our own way, part of the endless cycle of consumption, discarding, and picking up out of the water we are all part of.  Anyway, if we didn’t want these bottles in the end, we could toss them into the recycling bin. 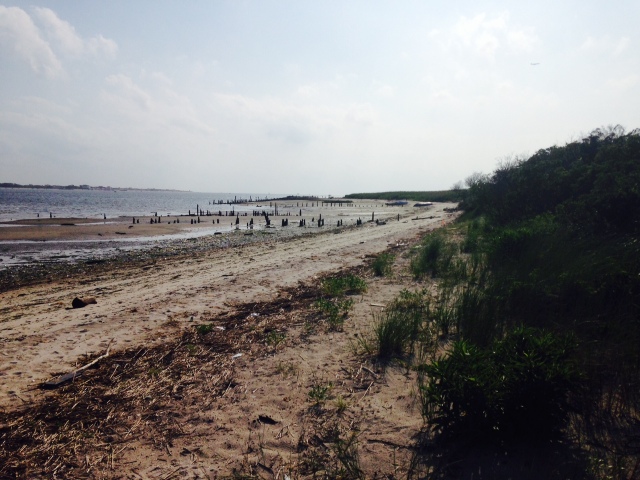