Yet another holiday of dubious origin and suspicious continuance and sponsored by various soap and beer companies entreating us to leave work early, put on a funny hat and guzzle qualities of chemicals is upon this land.
A few days after National Garden Naked Day and right after May The Forth Be With You Day, Cinco de Mayo is out to remind you that while it may be a weekday you can still have Jell-O shots and unabashedly listen to Banda believing it’s the Mexican July 4th celebration… Which it isn’t. It is a heretofore obscure holiday in the land of origin that has been elevated by those immigrants to this nation to occupy a special place as a political tool as has the Feast of St Patrick. The big difference between this particular holiday and that of the Feast Of Saint Patrick is that light beer drives the promotional materials rather than dark beer – and this blogger is unawares of any major procession or parade locked in sexual-political-religious-identity tete-a-tete controversy around this holiday.
Not that The culture wars have overlooked this holiday for listicles fodder and activist peeing. There are #Fails and #racism and #cazwell aplenty for all twits and twats in the sphere of tweet and media d’social to tussle over the true meaning of the holiday when a group of Mexican landowners successfully repulsed the French army to be later crushed… Or whatever happened.
The corporatist age feeds on all stories and especially multiculturalism. New holidays are but another natural resource to be consumed, digested, and shat out into a plastic bag that is then tossed into the closest coral reef or at whatever habitat is most endangered. 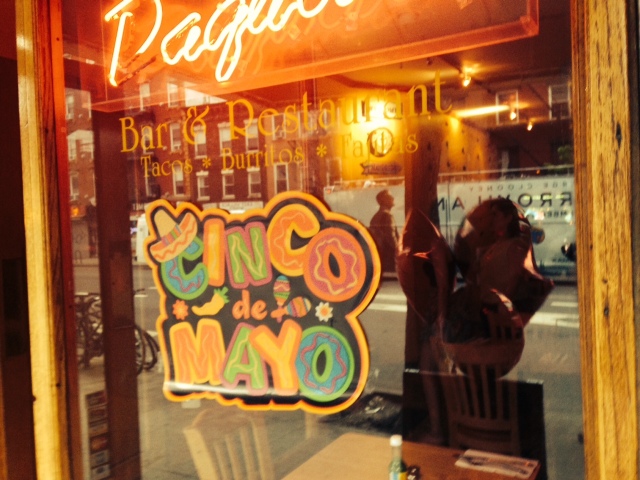 And so a thin layer of green hats or beads or feathers or dildos or fine china will form yet another layer in the strata of human advancement as it may be another link in the tangled web of worlds and so many swirling oceanic trash vortexes.
Holidays, like nostalgia, ain’t what they used to be.
I remember in the Bad Old Days of America when we would gather for parades celebrating North American conquest – we had recently lost a rather messy land war in Asia so I think chasing every yet senile veteran out of the house was in order. I think I remember WWI vets as well as Spanish Civil War.
I loved the parades and celebrations. Fireworks and rocket’s red glare. I was a kid, so what did I know…
I remember the little things as always. The sand at the edge of the road, the aluminium lawn chairs with wide colorful plastic bands (this was before those canvas chairs that fold up twice and then break), the tall cold soda in a sweating clean glass bottle and the strange feeling pop gave my teeth. The flags the bands the floats and knights of Columbus or sons of Erin or Italy or Grand Dragons marching along passed by and we still saluted Old Glory every time it came by. I did not think too deeply about these observances. I do miss them, but then it is natural to miss one’s youth, and to forget what sucked hard about being a child.
Today, our society is segmented and common culture is expressed only in clickbait and memes. We have a lot more holidays however, to celebrate more conquests of various battles and grievances settled through old fashioned and good natured violence. Some of these new holidays are ascending in popularity while others are being drowned out in protest and online petitions.

I do not need an excuse to drink to excess. Nor look to wars long past. We will soon replace Columbus Day and all that means with a new holiday celebrating an approved person or group of victory – maybe Mission Accomplished Day or whatever date our War On Terror comes to an end.
I wonder what colour the beer will be for that holiday.

Editor’s Note: This is part of Thirty Rants in Thirty Days a blogging writing exercise.  Forgive the higher than usual run on sentences, the structure of the rants or or strange repeated words.  This is entirely written on various subways in Gotham during morning and afternoon rush hour and whatisthatanelbowinmyface?