The snow has melted and the city streets are once again open and clear.  As the winter retreated it revealed those things captured in ice, the flotsam and detritus of humanity, the many little wrappers and leavings of our modern age and our ancient an untamed monkey-like passions.  The blunt-wrappers a plenty, little sippy drinks too small to quench thirst but that require thick packages with clever plastic drinking apparatuses, crisp bags, cigarette ends, and plastic containers that perhaps only held other plastic containers.  Then there is the biomass, the produce, the dog leavings, the dead and vile creatures.

All is revealed as the world is one filthy stage.  In time, at least in the more wealthy municipalities, these things are gathered and moved to other areas, dumped afar or collected and sorted and then dumped, or burned, or tossed into the ocean way beyond any international date line.

Then there are the bicycles.  All manner of bent and wrecked machines tied to trees, to posts, to signs, to guardrails, gates, subway rails right next to the sign proclaiming it will be removed, to other bicycles and dotting the city, each one with some story to tell.

What is it about these lost machines that is so ever-present in our Great City, and other urban areas, that is also overlooked.  These blasted artifacts remain week after week, month upon month. 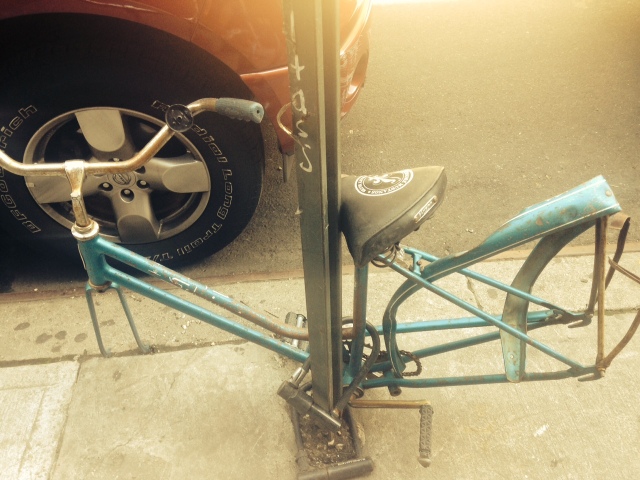 This blogger often imagines a story for each one.  That night where she rode to his apartment, things worked out, she stayed the night, she moved in and never rode again.  Or things didn’t work out… and she was never heard from again.  That time we rode our bikes to the bar but Steve was way to drunk to ride home so he jumped in a cab, never to visit that neighborhood again.  Some bikes are abandoned.  Perhaps out of malice.  They take up too much room in the apartment so one night, he just took it outside, went a few blocks from home, just enough so the contraption couldn’t follow him home, and tied it to a pole.  Free at last, she thought happily as she was now able to put her Ikea shelf full out of the way of the door so it could close and she could finally afford some privacy. 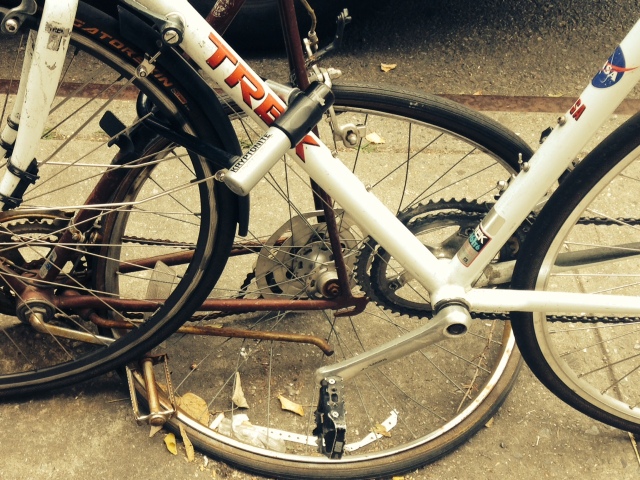 Other bikes were clearly the trophy of someone’s Worst Night Out.  That time we got something quick to eat but not so quick that someone didn’t make off with your front tyre, seat, chain, handlebars, bike lamps making it unrideable home. So many of these left objects must be the result of some damaging night, perhaps the night someone saw their violates bike, just one more insult from the city and said “that’s it I’m fucking moving back to Ohio!”  Having a bike in a major city starts in motion that counter that ever ever ever ticks on until it is stolen or destroyed.
I had a bike carefully tied to a post only to return later that day to see that it had somehow fallen close enough to the street to be run over by some car with fat tyres. It was an inexplicable wound since I proposed the car had to ride up on the sidewalk in order to crush my bike tyre such.  I angrily threw the damaged wheel into the street only to be yelled at by some old guy tending a shop, well, where the fuck were you when they ran over my bike buddy?  I sheepishly picked up the wheel and walked the distance back to my place with the bike tucked under one arm and the bent wheel under the other ashamed at my outburst and equally shame-filled at allowing The City to have its way with me.

There was a time I forgot my bike for a few hours only to find it stolen.  I loved that bike, it had a fine bell and was some old vintage clunker popular with the Hipsters of the time.  The police came to take a report but it was clear they gave between 0 – 2 shits about my bike.  “You’ll never find it!” They encouraged me.

However, in a bike shop a few weeks later, I found it.  There it was!  There was my bell!  And the junky rat bastards were willing to sell it back to me because I threatened them that my bike had a serial number however, I was short $25 from the reduced price they were still demanding. I had to get home to borrow some money from my roommate.  When I went to deliver the money for my bike the junky bike dealers they had changed their minds, they discovered my lie about the serial number and now they no longer had the bike and they won’t sell me shit and they impolitely requested I never go in their shop again.  I made it a mission to dump just the right amount of dog shit at their door night after night, sometimes even painting their locks with the stuff if possible when I didn’t glue their locks shut. It was more for me that it was for them.  My way of dealing with loss and the Unfair of the world.

Owning a bike in the city is perhaps not such a good idea.  After they started placing White Bicycles about the city I was impressed (some more) on how dangerous it is to ride.  Story after story abounds of some transplant to the city, a well meaning girl who drinks sun tea out of old peanut butter jars and reuses her bag when she shops for organic food at the farmer’s market and she rides her bike to reduce her carbon footprint and one day she is pulverized into chum by a oil-smoking van in yet another hit-and-run on Flushing Avenue.  Riding a bicycle in the city is a blood sport.  One has to watch out for cars, trucks, pot holes, sand piles, water of unknown chemical composition, delivery guys with their cigarette hanging from their lips and dull expression on their face as some looped code of a Commodore 64 locked in perpetual non-existence speeding on an electronic bike, pedestrians who seem to think you will just pass through them since they’ve seen Ghost far too many times, and of course, other cyclists.  The serious ones. 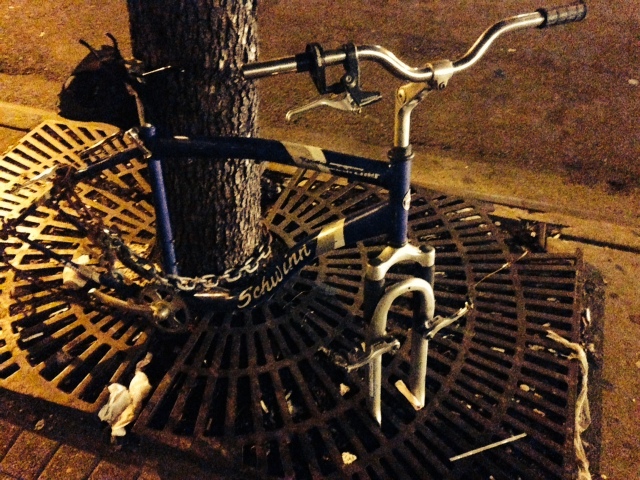 Serious cyclists are dangerous to themselves and others.  They are the ones that yell, BIKE on the Brooklyn bridge and then peddle full-tilt towards some Asian tourists taking selfies.  I encountered these aggressive pulsing hormone-injected riders when I commuted to work for a time on a bike.  ON YOUR LEFT!  They would yell.  I never could go fast enough for their pumping meaty legs or their swinging testicles.  PASSING! I was riding counter to the crowd and had several close calls as riders would attempt to out do themselves in some contest to pass.  I would ring my bell constantly – also to the derision of those heading straight for me “DING DING DING ASSHOLE” one yelled as he flew by.  I put on a number of bells on my bike that would ring out with each pot hole I struck until I sounded like a Chuck Wagon from some Olde Tyme film of the Gun Smoke vintage.

There are so many ways to die by bike in The City.  By the wrecked bones being picked clean of so many more unlucky bikes, there are so many ways for these clever inventions to just up and evaporate.  It seems that perhaps this is a sport left for the truly courageous and those that live on the first floor and need not hump their precious ride up and down the stairs every bloody day and that one day, all of us, will slip up and leave our ride outside, yes tied up with locks that cost more than the bike but still this will do nothing but give the thieves something to laugh about later at what I imagine are weekly Meetups where they swap war stories and funny anecdotes like this one asshole who bought a $75 lock only to learn it could be popped open using the shaft of a Bic Pen. 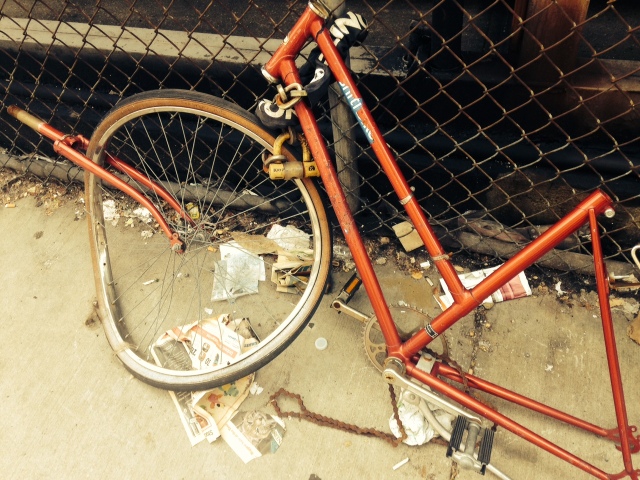 I look about the city and still read the dead bikes for signs of their former lives.  The BMX, the Sport, the Vintage all meet the same sad fate at the hands of the Mean Streets.  The locked parts remain, but in time, everything else is stripped or carefully broken off and taken away.  And then… after a year or so… depending on the wealth and influence of the neighborhood… the rest is removed by the city or hidden hands of the keepers of these tortured and forgotten things.
Who can know what story is behind each and every one of these leavings. 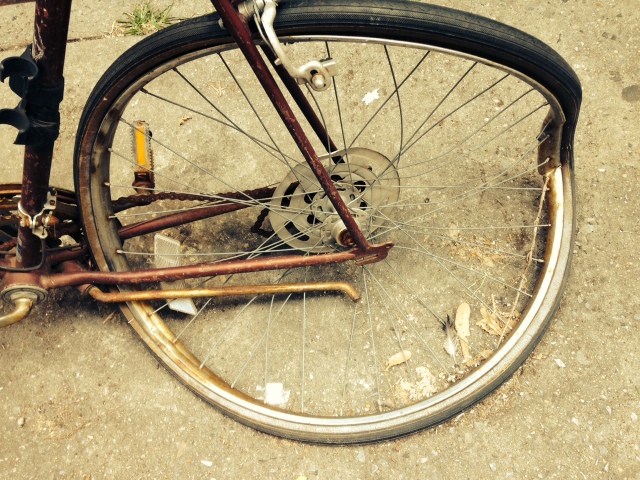