So This is Christmas 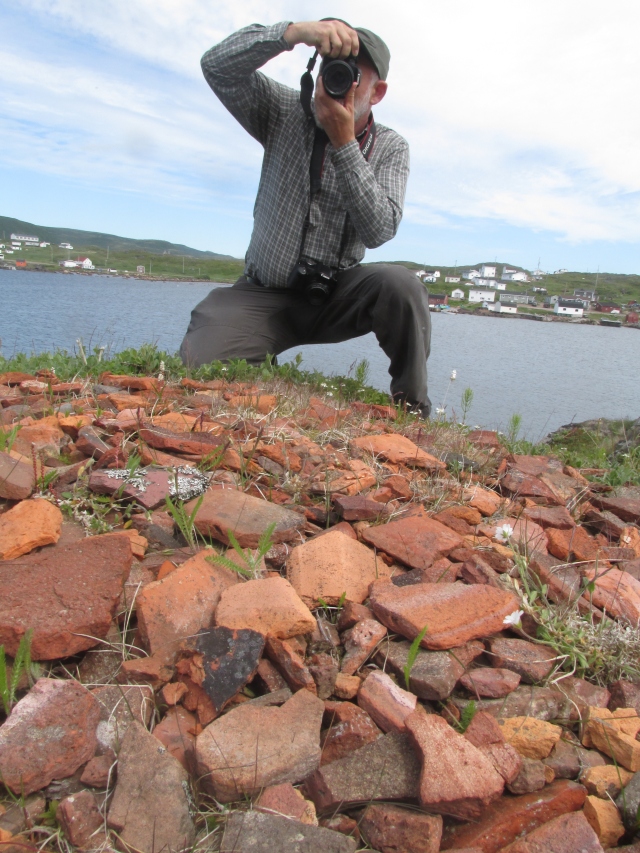 Red bay is but a dot on the map in an endless and unbreakable coastline. Labrador is a complex region in many ways. An interior of boreal forests, the far north of the Inuit people, and a coast that mixes Iceland and Ireland in healthy doses. It will never be Vacationland and pending the discovery of some ore, is but a wilting Provence in Canada’s bouquet of progress and cultural mosaicism.
The road connecting the coastal towns is but perhaps two decades old, depending on who you talk to and the Labradorian’s definition of “road” and “paved.” Winter roads have existed for quite a long time. To those of us living in Flatland, a winter road may cross a frozen bay and traverse the tops of trees in deep frozen winter and is accessible by sled or snowmobile. The concept of winter road is a hard one to wrap one’s mind about and is now but an aside, the fun of off roaring knowing fully well the trip through the woods no longer takes us past the wolves, but directly to grandma’s house, should we so desire.
Red Bay is so named after the 1. Blood of whales b. The endless red tiles that littered the beach. Today it is a community of a scant few houses and the terminal of the Trans-Labrador highway, still being blasted, built, piled and one day paved in a Quotien attempt to tame Nature and connect these good people of Labrador coast to the Outside World for reasons only the Boards of Canada may know. 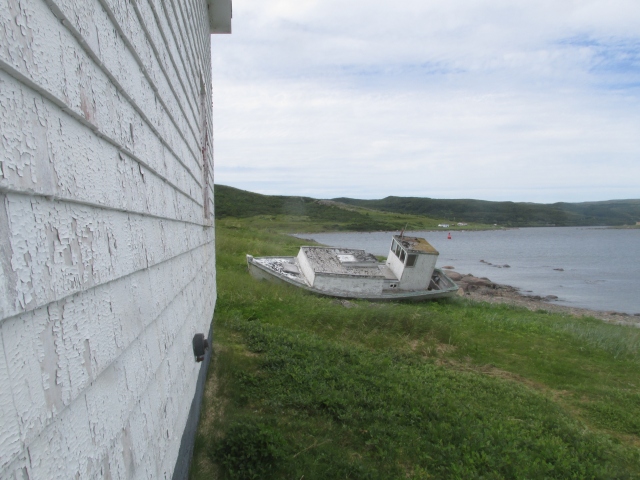 The original people of this region killed each other and whatever animals they needed to survive. Red Bay was for a time (1530-1610 according to extant records) a place where Basque Europeans came each summer to murder whales in a most hands-on and artisanal way. The bay once held 30-50 ships, their cargo more valuable than the produce of all of Hispaniola or ill-fated Roanoke Colony and much later “first settlement in the first state,” the famine-plagued Lewis of Delaware. The red tiles were the same seen in Spain, Portugal and their colonies. These tiles were taken as worthless ballast on the ships of yore that were dumped out about the bay to provide future generations of children skipping stones and confound archaeologists who, we were told, attempted to record each piece until they uncovered thousands upon thousands.
We arrived the day after a village-wide if not entire community celebration to honor a site in Red Bay – Shelter Island – with UNISCO heritage status. This was quite an event, considering how perfect a site must be to qualify with this honor. The community was indeed all a buzz.
In this part of the world “community” has a very different meaning than much of the rest of the world if not just much of North America. Communities are small and historically isolated. No one gets to these places by other than historic accident or circumstance of birth. Everyone really knows everyone else… For better or worse. The Year of Our Lord 2014 was a Welcome Home celebration for Red Bay. Signs and banners were all about with Welcome Home messages for all those who had left this community and now, as if a family reunion, were to return for a week of celebrations in order to catch up on the entire year in one week. That meant that the day we arrived in our little Dodge 600, it was Christmas, having the day before been Halloween. Here is not like Down East or the Flatlands where “community” is tossed about meaning “tax base,” precinct, or group of crazy old ladies who attend planning board meetings.
“Today is Christmas and we’re getting out the wrapping paper” said the clerk. At first, in the gift shop by the dock, I thought it was a joke, the sort of joke winsome locals play on out-of-town city-people blundering about learning to breath fresh air and ridding horses for the first time not knowing they were put atop goats or donkeys or emus or whatever with four legs like a table. Yes, indeed Santa was to come to town in a Christmas parade and gift the children of the community and then later that night the Mummers were to make their rounds – “There used to be more music and in some communities there still is, but now it’s mostly just the costumes” – one of the locals, a park ranger, told us. Really, it’s about getting the Mummers drunk and guessing who they are, which isn’t difficult in this community, said another local, a man dressed as a 16th century whaler. 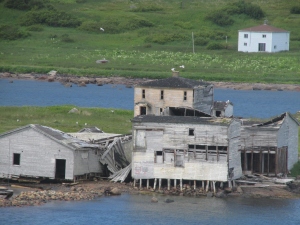 So this is Christmas.
It was a cold July day, the sun cut through the clouds but could not slice through the wind. It was below normal temperature, but not by much.
We were escorted to the island by a skiff with a few other individuals. We had been directed at the gift shop to go to the museum and there to get a ticket to visit the UNISCO Island. On the way out, with our $2 tickets in hand, we were surprized by a very excited lady who asked us to be models for the Park of Canada website or other promotional materials since they needed people pointing and laughing and looking at the historical island, where actually, the really interesting stuff like the ship, the dead bodies of sailors, the remands of the huts, were buried underground leaving a picturesque landscape but little else but small rocks and those tile shards to wonder at.
On the ride over we became fast friends with the crew in our own chalupas seeking photos of a diverse audience that included a few locals, some from a few towns away, some children, and us.
We rode over and took our pictures, mostly laughed and joked about with our little group but had time to wander the wind swept island of shelter, a name that seems none too true since the point facing the ocean holds the graves of eight score men and boys and one wreck of 1960s vintage. My traveling companion at one point seemed close to scumming to wind bite or frost sheer until a friendly parks official provided a jacket for our time on the island.
After our stint as models on the island of whale bones and mysterious graves we joined our Parks and Recreation of Canada friends at lunch and listened to complex stories of history and lore mixed in with bawdy tales of local community antics – the drunk Mummers, the lady who painted “Get Out” in red paint on the floor before installing new carpet, knowing she was projecting a very, very funny joke into the future. We sat on, through stories and even in to the staff meeting called by the boss where we were rather two cogs not quite part of the puzzle. Which is understandable. How often does one get to be there for the celebration of a new internationally recognized historic site … even if we missed the feast prepared by an authentic Basque chef. On the one side of the table was talk of all manner of squid ink pies and toasts of all colour in French and Spanish while the other side of the table was funny and raw stories of being a park ranger in this part of Canada – think stolen whale guts, idiotic tourists almost getting killed, and the time the car got stuck in a) mud b) ice c) mud and ice in a funny way.
In time, we made our adieu, and resigned to leave our quaint community that had so welcomed us home, the Parks of Canada officials who had taken us in and given our trip a little glamour, the locals who had joked with us and even the kids who had to be taken back by the skiff before we could leave the island since they had to meet Santa.
Since, after all, it was Christmas.
We returned to the dusty and now unpaved road.
To super-huge trucks and machines building Progress and the New World. We left behind the Basque ghosts, the whale bones, the red tiles, the Parks and Recreation of Canada, and the welcome home one gets only at Chrismastide. 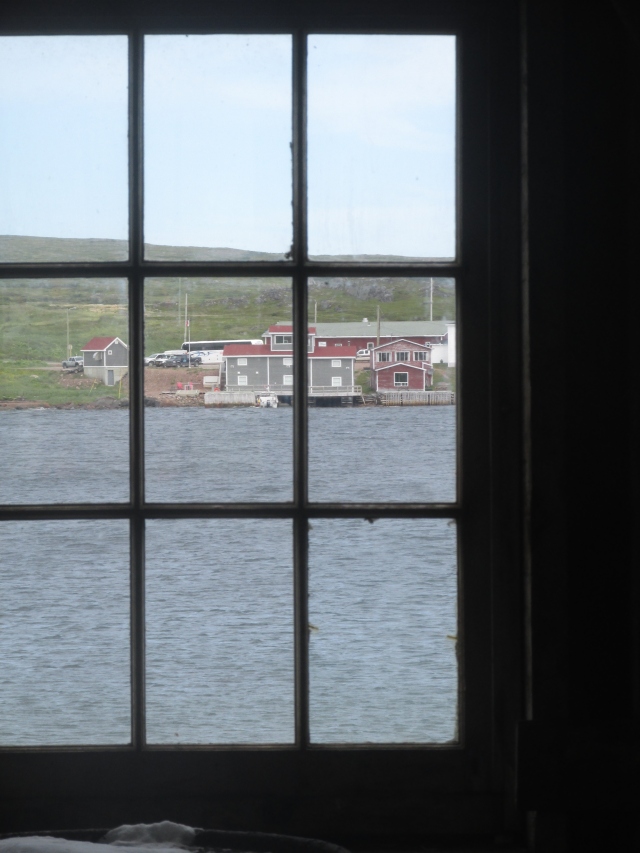