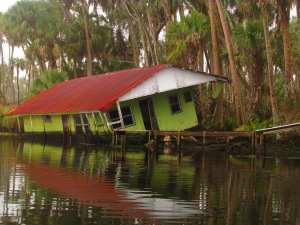 The fresh water springs are indeed impressive. Named Seven Sisters, or Old Man’s Hole, or Black Head Springs. Certainly what James, the keeper of the kayaks and the campground with the “No Weapons or Drugs” sign, said they would be. I launched into the early morning waters of a quiet section of glades (are these also “ever” or just that one place?). I moved beyond the boat launch, beyond the “Watch Out For Manatees” sign placed there for the tourists to see and feel somehow protected the damn things from speeding boats out early in the morning. I made for the wilds at once. Fresh water springs fed these various creeks and if you traveled up each little stream it would terminate not in some smaller set of march and drainage but some deep and strange cave gushing clear water. Having come from the northeast and the mountain waters that generally start in fart-smelling swamps, this was a treat. This water flowed past the sloe-eyed rotund algae-coated manatees, past the rape shacks flying confederate flags, and into the salt marsh that itself ebbed and jibbed into the open ocean of troubled waters tar-ball and tarpon. The fog flowed past my craft, vanishing about me as I approached but closing behind me, a damp curtain of unknown dimensions as if a creepy creepy fog machine out in the woods was switched on to make the swamp exactly as I have come to expect from the movies. However, no overly makeuped Johnny Depp came foppishly mincing away from some bug-a-boo or nasty Davy Jones Locker man. The mundane little things kept eating each other, fishies going snip on other fishies, birdies nibbling fishies, things eating and dieing, feeding and fucking, a tree actually fell right over, for no reason, right in to the water. Everything moved about as Father Nature intends. A manatee moved beneath my boat – a huge seal-maggot-looking thing that stared at me with dull eyes, daring me to “come swim with me asshole so you can tell your family ‘oh I swam with the manatees’ and how much I wish I had tusks and could gore you….” The manatees were eating… something manatees eat. Grass? Water grass? The birds dove into the water and snapped up fish, or speared them, or scooped them as was their given evolutionary/creation technique.

And I was the lone early morning witness to this feed fuck fest and it was beautiful to just watch the carnage…. Since it was still too cold for mosquitoes, nothing was going to munch on me in my plastic tub. And manatees don’t bite, as far as I know. And the alligators were docile in the cool air, so I hoped. I pushed up stream, cutting off at the fallen tree past the rope swing, just as had been drawn on my map, and there I was in just a few feet of water teaming with little fish of unknown species and dancing on the tree that spanned the water and under which I had to lean down in order to pass, a fat gray squirrel clucked and squirrel noised away reminding me that as mystical and exotic seemed in the fog, a heavy soup that refused to lift but gave an Authurian gravitas to even the rusty lawn mower pile next to someone’s house tucked right up to the edge of the water and smack up against the park boundary line, I was still in the thick of heavy development. I could make out the rest of the homes that pressed up to the water, their ram-shackled boat lean-tos – I refuse to call these collections of tin and stilts boat house but perhaps that’s what they are – and various possessions stacked about the lawns in keeping with this nation’s rule that your pile of shit in the yard is proportional to the inverse of funds you have in the bank or expressed

If I created the right expression. I then passed quite a few abandoned boats sinking into the mud or floating just on the edge of the water. Quite a few of the shacks had fallen into the water, perhaps the impact of the storms that had been coming through these past years.
I dug my oar or paddle or whatever they call that kayak thing that from a distance makes the user appear to be giving a series of semaphore signs into the water hard, and took a series of short quick slaps of the water in order to gather a little momentum in the shallow water. I moved away from the settlement and back into the swamps, still learning how to guide my craft with this awkward pole and ducked down for the tree to then make a hard left to avoid the larger creek that led to more houses and settlements even if it had at the source a similar if not larger set of springs. I was gliding over the bottom that was still crystal clear despite that the water was flowing hard in the opposite direction. Nothing like the muddy tubby turbidity I paddle in about Fort Mudge and environs on my aquatic excursions. I could see though the water like moving sheets of glass and suddenly the bottom dropped out. The creek was increasingly narrow. Plants and trees were close sometimes I had to paddle my way between large trees. Oh god, are these covered in spiders? I am sure that’s a spider on me! I am not used to being touched by plants that look like this. The water ran faster and faster. Shallow in many places, something I would have not even gotten my knees wet had I jumped out of the craft and walked away, but now there was a huge deep hole beneath me.

Clear and blue water, it was like I was hovering and now had to consider my swimming ability since there was now a chance that apart from the Creature of the Black Lagoon and the real actual non-anamatronic alligator I passed, I could be in a lot of danger at any time if I stuck my head into an alligator or let potentially rabid racoons bite me. What if I was struck by an irresistible urge to go cave diving without any equipment? By the look of the disturbance in the water, this hole was the spring gushing thousands of gallons, perhaps from the recent rainstorms perhaps waters flowing long and slow under Florida, rains that touched down from Heaven so many years ago an age before the strip malls, all those developments and gated communities, all those soon-to-be-abandoned gas stations, the U-Turn lanes were built, the water surprised to see the other side and the many changes to the landscape. These underground caverns and network of limestone veins like the back of an elderly woman’s hands, storied and tangled, the ground we all stand on riddled with dark and secret tributaries of waters from such unknown places and far lands that comes up, now, as I sat there in my little boat, to this silent spot in the nature park, up a stream, early in the foggy morning before the fishing boats went out. I passed over and over the spring watching the fish and frightening myself that the ground I saw about me was but a shelf perhaps balanced on flowing water, that perhaps at any moment this plate could crack, break open, and in front of my little boat a pit would open and I and trees, and mud, and plants, and the gray squirrel and the rusted lawn mowers and the horrible boat shacks would all be drawn in and then covered with water. Over my watery grave, a thresh of birds or is that a russet of crows or a merkin of magpies would sit on branches, the waters calming, the new cavern just another thing for kids in some redolent summer to take that one last deep dive and wind up in the obituaries.

Out in the swamp, your name vanishes quickly, sometimes before your eyes. We are taught to hold on to our name, our identity, but as I paddled into the swamp deeper and deeper, the sweet waters flowed and as I meandered in the many passages in the salt marsh the brackish waters bubbled each time I struck the muck on the bottom, and the call of the birds, the snort of the manatee was the same as ten years ago, ten hundred, or so many years from now, were we to just leave these wild places alone, and I did not have to wonder about who I “was” or “was not” and what I “did.” The little things ate the smaller things. The larger things ate them. The big alligator just sat sunning him/her/self as the fog lifted. The manatees bobbed about like Walmart people eating grass and getting hit by speedboats, and the sun finally broke through and the last of the fog vanished into the air, the mystery removed from the swamps that now looked rich and green, and in a matter of an hour, I was sunburned to all hell.
There are yet places that we can go to see just how wonderful this world is. Even if these places grow ever narrow and the hounds tied to flag poles and rusting BBQ grills crowd ever closer with each passing Black Friday.