The seventeen year locust are here. In truth they are cicada, not locust, but it seems that people know what you mean when you say “locust,” since there are far and few entomologists about in the world to disagree when someone in the KenTacoHut or DunkenStarbucks drops the wrong term or this blogger uses the wrong term.
Sadly, Brood II is almost coming almost to an end. Another seventeen years and we will see these creatures again, perhaps. If things work out like they have for the past millions of years, we will see the next crop come out in 2030. At least some of us will. Or some of us will see them if it all works out for us. Or if things work out for the bugs. If things don’t work out, this may be the last time we see such an emergence. Considering how much has changed in so short a time* since 1996 (*geologically speaking) hiding underground for almost two decades may not serve these insects as well as it used to. Perhaps living above ground would better benefit these cridders in order to adapt to Ortho, rural exhurbian development, and Fraking, and Paula Dean’s comeback, and Billy’s first tooth, and sundry other changes to the environment either man… ahem… human-made or otherwise coming from outer space to confront all manner of creatures great and small through forces of Nature that are native to the planet, such as mass extinction and the vacuum of space.
The other day this blogger took to the local creek, a tributary of the mighty Hudson. Travel up the creek is somewhat easier at high tide and with a little rain. Considering we have been getting a great deal of rain, the creek is filled enough and with the tide still enough to travel up past the rail bridges, the highway bridge and around a rather idyllic bend where beaver, deer, and various birds are bountiful as well as several fish species – some migratory from the creek to the ocean others ocean to creek while others remain year-around – all of which lends to a very pleasant journey up by canoe. I have taken to this trip as many times as I can in a week, a free exercise regime. Up by the old dam, where there had been a paper mill several generations prior, there is a high cliff on one side, the Creek Road, and the other a rather stately house that may have been once part of the paper mill complex. While both dam and the pilings from a long vanished railway are both remnants of an industrial and dirty past, they have been wrestled into submission by ice, summer storms, super storms, super-duper storms, and time. With all this nature and a vanishing of our industrial past, I was surprised to discover that someone had dumped about twelve or fourteen television sets over the cliff. Some broke into pieces while others remained intact either suspended in trees or at the banks, or in the case of a few, bobbing in the eddies created by the water flowing about and over the ruins of the ancient dam. 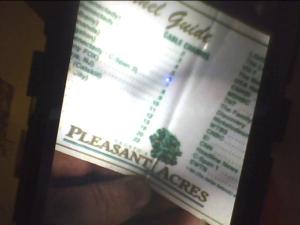