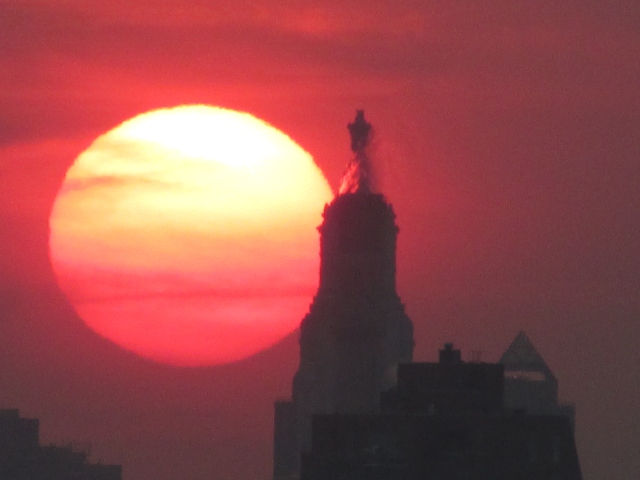 The start of summer is here. We know this by the incessant sounds of the ice cream trucks in the urbanized areas, peddling ice cream bars made just after WWII and sticky treats for young and old. I was told that Back In The Day there were also trucks that would carry small versions of popular carnival rides that for a few quarters would give kids the thrill of being on what my sister called a “one bolt wonder,” that is, everything is held together by one bolt… and you wonder if that bolt will hold. These trucks are no more, rumors from a time when kids may or may not have played safely in the streets, from that time when we may or may not have safely drank from garden hoses, or did all those things we’re sure were safe because… I mean, we survive and the dead don’t write history do they?
We know summer is here because the locusts are out. The mosquitoes are back. The fish are running. The invasive species are blooming. The kids are counting down the days to school’s end since most of them can count that high if they use their fingers, even as young as middle school. The gardens planted still seem optimistic, the turned soil still holding water, the weeds still small and manageable, the worms, leaf cutters, aphids, spider babies, larva of doom, your neighbor’s dog have yet to pinch, cut, and steal away your hard earned work and turn your beloved plants into mush. It is time to count the canning supplies in hope, to evaluate the number of dinners and to see if perhaps this time for reals we won’t buy anything from the grocery store except for cheese. And flour. And maybe a few hot dogs. And some bacon. Even if all the pork is now owned by Red China. Again this blogger is tempted to make all manner of New Solstices Resolutions, to swear off meat, dairy, to go green, to eat just those things I planted, walk to places I need to go, not use electric, swear off porn, not hang out all day on Yelp, stop posting comments in The Times, bathe more often but with natural soap and in cold water, but I know that this is just another set up to a failure. I am, as most of us, even those who wish otherwise, still very wired into the system and will have to rise and fall with so many, my fate not unlike yours, except that you may have bought one of those year-long food supplies and have trained to use a Fremen suit, able to spend months at a time out in the Dunes harvesting Spice. 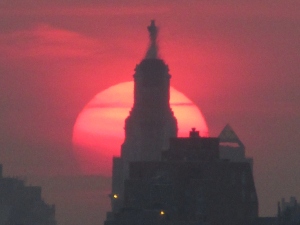 In the meantime, for several reasons all of which are personally economic, I will be retreating for a bit from Gothem to environs north where I can repair my standing with the financial system, evaluate my prospects in survival in the Digital Age, and reconnect with nature and do some serious gardening. This will be hampered since my own gas powered mobile personal transportation system has been in the shop for months and may continue to be in a state of immobility as the mechanic searches for a part, the brain actually, the computer chip for a craft so old that only those elderly out there in digital economy land can remember 1995. “I don’t have a computer that old, but I know a guy and maybe Friday he can run a scan on this thing. Other than that, I don’t know what’s wrong. It has air, gas, compression, everything else, just missing the chip to regulate all this.” I will have to arrange another system, get an even older mode of transportation out of storage, my 1984 burgundy Dodge 600 convertible. Who knew that would be the practical car… 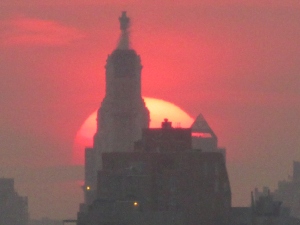 In the meantime, the summer will rest upon us all. We may not be certain what this means since forecasts are all off, the global warming theorists pointing to warming, the ice age theorists claiming the opposite. The information age did not predict that each bit of information, each series of 010100001111000 would be so politically polarized that we have perhaps reached the zenith of what we can know, human nature now holds us to go no further, our ape minds allowed off of the parries of Africa and to run a distance, but not to achieve Star Childhood as we had imagined back when science fiction told us 2001 was the year of our space odyssey. Sadly 1968 may have been that year, the years of putting men on the moon and creating thinking computers and from there we may be sinking into the muck, able to fit a world’s bit of information into a pinhead, but then to use that information-filled pinhead to prick the eye of our enemy, the one who agrees/disagrees with climate change, sound money, or civil society as we envision it.
Mankind can regress in evolution, it doesn’t always go upward and onward. Nature makes mistakes too. Empires can return to waring nomads. Forests can become cities, then poisonous fields and hillocks.
Those in the evolution camp would claim this sine wave has always been, yet has it been at this speed before and for these stakes? The anti-evolution crowd would say this is G/g/o/_/d/s/es/ess will and that is that. In between, the gap between these sides that chasm that exists in our polarized infotainment circles, perhaps there is a truth that rots there fallow and for all these pairs of Google Glasses(tm) we won’t see it no matter whether we ask Jeeves, Yahoo, or Uncle Google.
Summer is here indeed and we will see what this season brings. I will fight on. Fight the impending weeds. The inevitable bugs. The disruption of our finances. A potential collapse of the entire system that seems more impending and less likely at the same time. Try to get the music from the ice cream trucks to stop playing inside my head. We will enjoy a few campfires, some home brewed beer, and some tomatoes from the garden, maybe a quick trip to the beach to remind ourselves why the beach sucks. If we play it right, maybe we can steal another lazy summer day or two while we can yet enjoy it. Maybe I will hail that ice cream truck after all. Mr. Softee, your music has evoked my deepest memories of a nation that no longer exists, but those old trucks, that old tune, those ice cream bars made during WWII, we still have those.