Journey to the end of the night

With travel comes a certain freedom in doing whatever you want, but with travel in the United States, we have an exchange rate of 1:1 so this makes things a little more difficult than, say, Asia where I hear the housing is cheap, food fresh and inexpensive, drinks the cost of bottled water here at home, and a “long time” night with a woman costs a little less than the average dinner for one person at a TGIF back in old New York City. In America, travel is going down the block with your allowance, and hoping you don’t get mugged. The Turbodog at KenTacoHut in the South is a few cents less than up North, the Southwest a few more cents shaved off and some better quality as long as the food is Mexican, and in the Northwest, expect the prices you find in New Jersey or Western Massachusetts, unless it is tobacco, then all bets are off since the Northeastern states seem to tax the shit out of that shit, and for good reason. I was told by a Canadian that up in that country the things that make you sick are expensive but healthcare is free.
I am headed back, but not done with my travels.
I know nothing, I have only impressions, and whatever I read on Wikipedia.

Going to Chicago I am entering more familiar territory – I’ve been to Chicago a few times – even though I know this will be a different journey by train and there is still another day of travel just to get to Chicago, so all is not over, even though I am running out of allowance money and may yet get mugged. However, I wonder if I am returning to those yards and fields I saw on the Crescent service, back to the post-industrial wastes of cheap property backed up to the rail line, forgotten downtowns, abandoned rail sheds, crap houses with yards filled with large soft plastic kiddie toys and rusting cars with sharp edges and glass. Also, did the world blow up while I was unplugged? I know no one talked about the world blowing up, but what do people on a train know, do people out West even care about what happens in the rest of the world or is it too far removed, is Washington DC just a joke and Asia just a dream, is the Mid-East even news, do they have enough Jews controlling the media with their homosexual liberal agenda to put Israel front and center on NPR every morning or do they talk about poverty in Africa and Monsanto poisoning crops or puppies and kitties playing together? This point, as the train rockets through the darkness of North Dakota, it seems that this is a checking in point on my travels, if nothing else, should be a reflection, seeing how even in the setting sun the hills and fields were very zen and I am not entirely sure we’re not circling the same place, the trains controlled by Christian heterosexual conservative agenda intent on making this chunk of America look far larger and more vast than it actually is and the Right Wing broadcasting only the Big O’s assault on Gunsandfreedom on the TeeVee.

In this trip I have started on the Crescent in the city of gray, headed south via a Corridor of Despair(tm), entered in to the South beyond the Beltway, gone to the Deep South’s eastern lands, and Way Deep South (WDS) aka New Orleans before making a right turn. I’ve seen cities that once were segregated, and apparently became re-segregated if not totally abandoned, crack shacks, slave shacks, and palatial gated housing developments. I’ve passed fields, forests, and more junk cars than I can name with a surprising number of classic wrecks that I actually find interesting…. But then I love junk. In New Orleans I saw that redevelopment is part of relatively, and while nothing stays the same, broken houses may rot there for a very, very long time. I took the Sunset Limited and saw fields of cane, and rice, and stacks of pipes we use to drink the world’s milkshake. From the train I have seen alligators, deer, antelope, havalina, bison, cows, moo cows, long horn moo cows, lamas, dolphins, sea otter, more deer, wolf, elk, bald eagle, and something I call a stoatie since I am not sure what it was but it was cute and looked like a stoat. I passed through deciduous trees just budding, swampland, bayou, grassland, desert, the lettuce land and armed forces land of the Coast Limited, plateaus, pine trees the size of telephone poles, the continental divide twice (the upper one has a monument, the lower one a road sign that may as well say ‘Exit 12’), snow covered peaks, tunnels that bore through the living rock (you call this a mine?), spanned raging rivers, and the muddy sloppy seconds of the Mississippi, and all one rail at a time at speeds approaching 40 maybe 50 miles an hour… except the odd occasion we go either 10 or at 79.5, the legal limit for rail transportation in this technologically advanced nation of ours.
In all of this I see a nation that is…. on the edge. A nation that can and will go either way. Either reaching out to achieve that vision of our nation, or slipping back into darkness, division, and joining our American brethren from Mexico down to Argentina in proving that a nation can have wealth and retain poverty, have capitalism but not democracy, and the ruling class can be white, brown, brownish white, or tan, and still enjoy a hundred years of solitude. 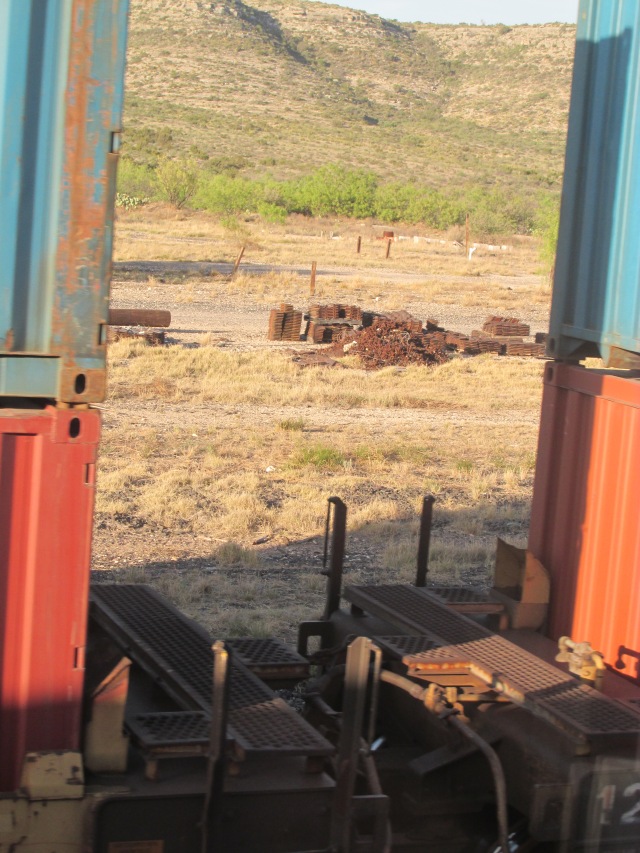 It appears that the industrial brownfields of our eastern states meld into the failed agriculture of the south, the cracker boxes and slave shacks, the New South rose with the bubble and built glambox developments that have since gone bust and in places are replaced by the gas bubble, frack baby frack and drill baby drill. Hotlanta has become the land of foreclosures and highways and all around a stabby place to be. New Orleans, an American city attacked by Mother Nature, where more people were killed or wounded or displaced than by all the terror attacks on American soil since 1934, has not been rebuilt, and won’t be rebuilt other than in the image of the private for-profit schools and corporate interests expanding gambling halls and tourist attractions. The only thing that keeps the sprawl of East Texas from spilling over and ruining West Texas is that the place hasn’t had any real rain in three or four years. Arizona is also dry, but the south seems yet safe from the rabid Republican north, but only just so. California is the same as it has been for decades. The south becoming the New China in air pollution and the inequalities of an economic system based on undocumented workers and a dual system of language that will one day rip that area apart, since a common language is what drives a nation state together…, diverse India, with its 300 or more languages continues to use English as the language of the court and a common tongue for government in all areas and does not side with one or another ethnic group and the country is held together by its own colonial past (maybe we need revise Latin in order to also not play favorites since English is a foreign language in India).
The salad fields of California are quite stunning, but also sobering to see that so much of the food we eat, not the corn we feed to cows/make into ethanol, not the wheat we feed to cows/export overseas, but the greenery, the tomatoes, the strawberries, come from just one area, and what would happen if this area did not get rain, or the laborers walked off the job, or California left the Union? That would be a strange day indeed. Then, there is the Northwest, the sister cities of Portland, Seattle, and Vancouver, where East finally meets West and produces tech companies, green energy, recycling, and Crust Punks. In each one of these areas there is hope, there are people working hard to save us from ourselves. The constant rejuvenation of so many downtowns is apparent in many areas in New York and New England. Perhaps it will remain very local and success an anomaly. Northampton, MA, Bennington, VT, Ithaca, NY, Hudson, NY, Kene, NH. Ashville, NC was highly praised as far away as Portland as a jewel of the south. Do bands still come from Athens, GA? New Orleans retains music and culture just off of Bourbon Street from what I can tell, and the dirty old city has never really worked out, and that’s why we love it and outside of the struggles of poverty, maybe some are better off trying life anew away from a Big Easy that wasn’t too easy for those not musically inclined. Alpine and Austen, TX are known as the Portland of Texas, at least according to some Texas kids I met who were very excited to ride their bikes and not have bottles thrown at them by shitheads in pickup trucks. Tuscon, AZ has a strong culture of music and art that spills over into the day time with a very DYI attitude and a new generation of activists who seem willing to dig in and push back against those who are pushing their estates further into the hills and drawing thin the already scarce resources.

Red lines or segregation or class warfare as many see daily out West, traveling on the rails in California there was no strangers and when our train stopped dead, a community of circumstance came about where the only division was between the nonsmokers, and the smokers who turned funny colours waiting for a fix. Numbers and emails and book of face contacts were exchanged, and it does not take a real disaster to have the authentic humanity come out in people.
Portland, as I am sure I have said enough in prior posts, is part myth, part solution, part theater piece, part luck in how it works. Perhaps an example of all that an American city can become, perhaps an example of the fake and polite city so many people have raged against in so many other areas of the country.

The Empire Builder, like the other routes, is storied as it is at times breathtaking, at times mundane in vista and route. Like the other routes, those on board are different, traveling for different reasons, and I am sure each train is as unique as the last one.
Perhaps in the night out there in the screaming wilderness, there are answers. The ghost towns and abandoned farmsteads, the vast fields, open wild areas, squalid reservations, oil fields, gas works, junk cars stacked up, blue-green waters, snow covered peaks, and the darkness that now envelops all, the points of light seldom seen in order to track our train’s movement, apparently the stars on a clear night the best view of the universe we have. Impressions can be wrong. A traveler’s tale inaccurate. Personal experience biased. Like the inky long night, perhaps the only true thing is that the train faces but one direction at a time, and for now, this is towards home.

2 thoughts on “Journey to the end of the night”