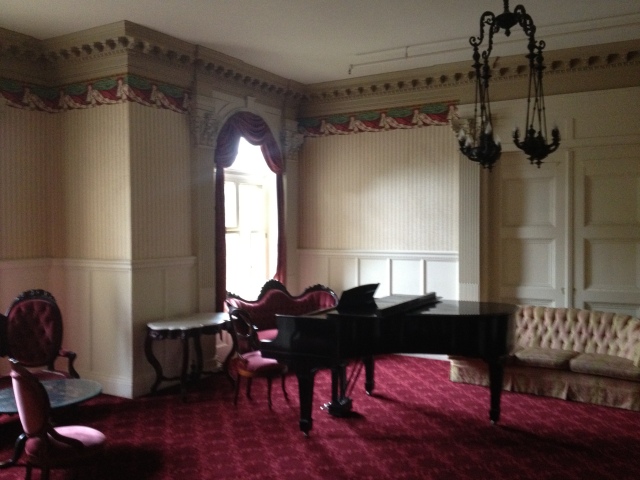 Often it follows you into the stalls. Creeping about the floor and peeking between those awkward doors, always a little rusty at the bottom from splashed pee and the door that never latches knocking against your back and you shuffle in attempting not to touch anything, and there is it, piped in with you. You have it with you at the gas stations. Outside or inside, it no longer matters it stands about all day at the pump or oozes out of various holes cut into the station itself. Every car has it as a way to defend your time from thinking. You don’t drive you say, oh sir no sir no, madam please, I am a Green, I take public transportation, but to this you still find yourself either plugging into your own or being walked over by someone else’s. The stores you shop at, restaurants both high and low brow, the places you drive to do whatever it is you do to pass the time, the car itself had become something to transport about these shock waves, these echoes and bridges. The cafes and bars make it impossible to have a conversation, your discussions are nothing but the soundtrack to the music about you. Every thought you may have about Kunst, belles lettres, theophany, mord forstora, molodykh zhenshchin, perverterunt cogitationes, or Smurfs has been smoothed over by the sound of other voices, you are perhaps guided by voices and don’t even know it. Can you imagine the Paris Commune planned in some café blaring Radio Head? Could the workers have united in factory floors playing Sound Garden? Would those poets and writers who made café culture sound so productive have been able to author one note, jot one thought, reflect one…. Uh… reflection, were Mama Cass and Billy Holiday pumped up to create “atmosphere”?

Muzak, the name synonymous with somnolent sonnets, has attempted to rebrand itself, the term “elevator music” having no meaning in a world where epic bands now play to get you through the experience of buying pulled pork in a jar or rayon dresses and union pants. The elevator doors have opened and we all now sing “do wa ditty ditty dum ditty dum” and forget that we were thinking about punching the system in the face, lighting firecrackers under the ass of power, or building the New World Order, or at least adopting our 16th cat. With more workspaces moving to open offices, more workers turn to create their own private office space by muffling the voices of their co-workers by putting on their headphones and pressing Pandora on shuffle.

Now that you’ve found it, it’s gone – now that you feel it, you don’t – You’ve gone off the rails – So don’t get any big ideas – They’re not going to happen – You’ll go to hell for what your dirty mind is thinking…

Radio head is playing where this blogger sits. Music is in so many of the “public” spaces I attend. The shit that goes into my ears is constant; I am beginning to think my life is the soundtrack to their music or is that a refrain or chorus? Much of the music i hear I enjoy. It’s catchy. Perhaps I can’t remember the lyrics cause the chorus repeats the same four words for me, is it a beat, is it a finger snap? This author isn’t so Autistic as to have a fear of music, it’s not that wild horses could take me away from it all. Oh, oh, I listen to the music all the time. I don’t want the music to stop. Music, reality, sometimes it’s hard to tell the difference, but we, as entertainers, have a responsibility, to these kids. Do you like American music? I like American music. There’ll be another song for me and I will sing it, there’ll be another dream for me, someone will bring it, all the sweet green icing flowing down, someone left the cake out in the rain, I don’t think…. I don’t think I have… that…. Recipe… again.

The amount of not my thoughts that occupy my brain are the virus to the mental hard-drive sucking up space and duplicating itself so that I don’t have one version on I Want Candy by the Strangeloves but ever bleeding cover made since then. There’s barely enough room with this mental library of certain choruses and snippets of lyrics to manage an idea of my own. There are articles about how the United States military conducted a type of torture by using music such as Metallica to deprive detainees of sleep or disorient them (ironic, considering the bands hit single One) but we have a kinder gentler program about us as music is in the background of so many of our experiences outside of our home, it has put us quite outside of our heads. And, this blogger proposes, this is intentional.

Not in a Illuminati sort of contrails are mind control gas, our leaders are giant lizards, Jews control our media but only the same way that Pakistanis control all the Quikie Marts, Iggy Pop is 6500 years young, sort of way – which this blogger is not saying is completely untrue ideas, but that our minds are being saturated by music, and that the net result of this is what paranoid bomb-shelter builders of the 1950s would call “mind control” so that in the “public” spaces we cannot have our own quiet ideas and become so dependent on receiving this noise that we find quiet spaces quite frightening. However, this perhaps is a paranoid delusion. You know, that chemicals in the contrails are the government sterilizing minorities with aerosol, the fluoride in the water is there to control your mind, that SSRI drugs lobotomize you and enrich the health care industry, junk food has been chemically designed to make you eat it, odor of fast food was created in a vat in New Jersey, that sequestration is a wholly invented event, news outfits collude with corporations on coverage of major stories, and the current administration has expanded executive power, increased control of information, authorized drones on native soil (airspace), executing American citizens without a trial, and that Elmo indeed wants to tickle you, but not where we are supposed to be touched.

Even if not orchestrated by anything other than the times we live in, the net result is that we are living in a world where to experience quiet and collect our own thoughts, we need buy membership to a yoga studio or shave our heads and go all Buddhist cult n’shit and sit on a rock and listen to one hand clap. Perhaps it is time to make the music stop. The pervasiveness of music has become a tool to corporations to make us shop, to drive kids away from hanging out at Quickie Marts, to make us eat more at KenTacoHuts, to believe our drunken babbling at a Chi Chi Mamas was a “great night out,” or to provide accent lighting to a place where we’re not getting a cup of coffee, we’re experiencing the life-style and values of Stapeetazo coffee. Perhaps we need to take a more active role. To turn off that little hum in the background when we can and to find more spaces where this picking trickling of beat we can snap to can be put aside and we turn to listening to whatever is in our head, even if that’s a screaming scheming void. There are many out there, perhaps more of them in the classical community, where you don’t play music unless you are listening to it, focused on it, reveling in what has been since humans stopped living in trees/expelled from Eden, a magical experience where we can feel and think and wonder without a single word spoken or thought.