The gun debate has heated up, so too has the winter. Winter storms, the kind with snow and wind, the sort that used to define this period of time of short days and long nights, are now seen as to unique that they require names, individual identities all their own since, I mean, we need to be aware of the dangers of these storms and that foreign frozen water stuff they bring that piles up in bizarre ways and requires us to buy oh so much rock salt to make it all go away. While I still propose that the northeast winter will start in February and last until late August, the winter is yet mild, the bugs to come still are unmolested by deep frozen grounds and awaiting their time to feed off of us and the things we grow. In what we used to call spring the black flies and shad flies would… well, fly. In this mild winter we are concerned about guns not that river ice hasn’t been extant since I was a kid… and I ain’t that old.

The gun battle goes on, the state of my residence passing a set of laws (or was it just one, so easy to find commentary and spidered links so hard to find original documents) or decrees and so forth about this or that type of gun. I was moved to buy an enormous amount of ammunition just in case, because I have a very cheap source for my antique rifles not because I actually needed another 1000 rounds to defend my home from invadersterroristsconquistadors or keep the gubberment at bay. What is one person with a rifle going to do against a government that removes our rights by decree at home in ways we don’t even pay attention to (NDAA, Bradley Manning, SOPA, etc) and has at its disposal everything from flying killer robots and bomb sniffing dolphins to atomic bombs and unlimited poor people to sign up, thus paying half the population to murder the other half. I have no fantasies about defending myself or the Constitution with a plinker, whether it has 7 or 10 or 30 rounds in the clip. The assault rifle is anyway one of the most useless and stupid inventions, a real boon for ammunition makers and continuous parts dealers. Ever fire an assault rifle? If you have, perhaps you know what I am talking about. Fun? Yes. Real fun. Made mincemeat of a TeeVee in record time. But this is not useful for anything else. Nothing. Nada. Oh, maybe someone thinks, well, sir, I disagree, I need to have unlimited rounds, I play video games all day and I never reload, and that is what I want in a rifle. It doesn’t matter that when fired the gun travels, that after the first one or two rounds in the general direction you are now shooting in the general area. Spray and pray. Oh, sir, no sir no, these guns are used in wars, these are what our police will use against when Uncle O rounds us up and places us in internment FEMA camps. I, sir, do not want to be outgunned. I want the same gun that the Taliban uses in their fight with Amerika, what the Iraq army used in their war. Because… those Taliban…. They’re really winning in-head on confrontations with the US military…. When they aren’t blown totally to bits. And the same with The Iraq. They fought us with AK-47s. And that worked out well for Sadam & Company.

In full disclosure, I almost was caught up in the rush, the consumer frenzy to git it while it was hot. But then, I remembered who I am. I am not an assault rifle person. Even if we think through the fantasy of standing up to our gubbernment, our zombie neighbors with AK-47s, some home intruder who can only be stopped by 30 rounds, what is that rifle really going to do? It barely works for our military – think Vietnam – let alone in the hands of lazy amateurs. And that’s the real heart of the story. The assault rifle is part of our fat and stupid society, part of our genetic disintegration, and a social consciousness where we want automatic arousal and think of ourselves like Rambo – the hero who blasts bad guys while walking down the open road. We are as stuck on this fantasy of ourselves and high self-esteem as the British were back in 1790 when they refused to break rank or adapt their fighting style to meet the needs of wilderness engagements. And how did that work out for them against an army that melted into the trees, and that army had a fire once, run for your life to a safe place and reload before being chopped up by sabers or impaled by a pike. 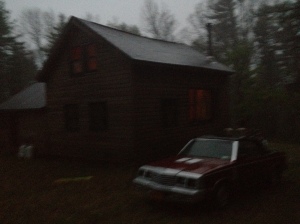 The Soviet army didn’t win The Great Patriotic War with the AK-47. Not even the PPS the RPK. It was the SKS and the Mosin Nagant – rifles that house a mere five bullets… and one in the chamber…. not even seven, or ten, or thirty. Part of this was the lack of industry to produce bullets. That’s a longer story…. Anyway, the point is that the army knew that if they gave out ammunition it would be spent but perhaps not used – that is, meet its target. Now, it is true that they had unlimited farm boys and even more Ukrainians, but the use of the rifle elevated the sniper and the one shot one kill approach to fighting. I happen to own a few Soviet rifles. They’re inexpensive, have few parts to replace, and simple to maintain. With the money I saved not jumping into the gun buying craze I could pick up seven or more such rifles. And in the fantasy so many people have about defending their property from the gubberment or from zombie mother fuckers or that drug dealer who just has to break in to your house for your canning equipment and Billy The Talking Bass toy and is immune to anything below 30 rounds what do you want? Do you want to run into the open alone with your little plinker firing away in the general direction of the SWAT team who have been training for years just to put a hole in your stupid head? Or do you want you and nine other friends all hiding in different locations knocking off zombies from a quarter mile away with a dead-on eye shot?

Now on to selecting seeds and planning my garden since the bug season is coming soon and I need something to feed them. Too bad my rifles are useless against stink bugs, tomato worms, and those damn squash bugs. The Japanese Beatles. The moths that I swear I’ve never seen before. The goddamn bloodsucking mosquitoes. These weevil things in the ground. The ants. Whatever was eating the corn stalks from the inside. Whatever was making the beans wilt. This strange rust on the leafs of certain plants. The moles, voles, and field mice. Fucking squirrels. And the weeds. How do these weeds just jump up and strangle my plants? What I wouldn’t give for the gratification of just one drug dealer or rapist to break into my garden and threaten me so I could blast his fucking head off and feel like there, I was able to do something to save my garden, fucking garden is wilting and being eaten but buddy, you’re dead and yeah, I won and your blood will nurture my garden and I’m laughing so hard…. And so, pending that happening, I’ll continue to thumb through looking for tips to defend myself from this army of small pests.