Remember the Weight of the World, It’s A Sound We Used To Buy

“You find the smallest thing of such importance,” the young musician exclaimed.  He gestured to the candle at the center of the table.  “It could just be this,” the candle was forcefully knocked into, “and that thing is the most important thing, it’s so important, but you’re young and you don’t see that that thing doesn’t matter, that these things you feel so strongly for don’t matter.”

My conversation mate, a woman about dead center between the ages of my protagonist and myself, agreed.  That’s what I noticed about getting older… Things just are not that important…. I’m not torn apart by those things that were all the end of the world to me then….  I could not consider if this Not-giving-a-shitatude was a good or baleful thing, when I was chided, well, except for you, perhaps you’re still there.  And, perhaps I am.

The voyage of Youth to Old Age has not changed from the times of Thomas Cole to Perseus, to Gilglamesh.   Many of us start out as the leader of a tribe of Lost Boys and we live for adventures in the woods, metaphorical or real, or follow some guru Peter Pan, metaphorical or actual, and that smallest thing, that ritual we have always done since time [last week] immemorial, that most precious rock we found, or field we can consider the Deep Thoughts of the universe, that song that Changed Our Life, that film that Blew Our Mind, no minor aspect of the great tapestry of the universe is too small not to consider, to pine over, to feel the greatest slight, loss, or despair at the smallest of event.  The death of a baby bird that fell out of its nest.  The cat in Madrid that was hit by a car, the other cats looking on in wonder, and these strange desperate mews…. The fire that gutted the old woman’s house and the cry she let out…. That girl/boy who you talked to once a month ago, didn’t remember you when you creepily walked over at the café and said hi.  These gushing hours or youth, the gnashing of teeth as the tiger gnawed on the bones within the Hunger Artist’s cage, that is the emotions we can blame on hormones, the chemicals, and our developing adolescence brain.

So, we get older and apparently get happier, according to some studies (funded perhaps by the Don’t Fucking Give A Shit Foundation, or Eli Lilly) and much of this is because we learn not to expect too much, not to reach so high, not to give so much of a fuck about fucking fuck all.

Perhaps that is a good thing.  That small thing doesn’t inspire fantastic and self destructive behaviors.  That thing you’d just jump off the bridge, that stupid thing…. Yeah, that.  Well, that’s ok if you grow out of that.  The importance of some small matters are good to put in perspective.  The friends who fucked you over?  Who cares, there’s more people in the world.  That girl/boy/farm animal that rejected you?  Who cares, your ego is not worth it and there is plenty of vagina/penis/dog hole in the world if that’s really how you want to define your life, your existence.  It is good to grow up and no longer be a floating plastic bag in the tides of emotion and minor drama.

We spend such a little time in that state of being, but often those short years can shape who we are.  We are, only human, monkey shitting animals who fell from the trees such a short time [5773 years] ago.    Our early behaviors are considered practice for when we are older.  We play, that is to try on this activity.  We assign roles in our games, that is to try on identities.  We run and skip and push and shove [before all the laws against this] and yell and talk, talk, talk and rhyme senselessly and incessantly.  We do this, the elder heads say, in order to practice our skills, our fine motor skills, the hand-eye-masturbation, the Raceclassgener Identity™ of it all.  However, is not our overly caring, our emotions of youth, our feeling that this thing, that thing, the thing in front of us is the most important thing ever.  That this moment, the one we are living in, isn’t the most important ever.   That ritual, that building we walk past, that stone we gathered on a beach we’re not sure where with a girl we can’t remember the name of, that thing is the most precious thing we have ever owned, ever believed in.

And perhaps getting older we can no longer be wrapped up in the emotions of destruction.  Of want, of unfulfilled desire, of rage, or disappointment of all those self-centered emotions of youth and they can be tossed as we mature.  But, not because we fail to still connect to those primal emotions of Janus,  but we have tamed them with experience, with knowledge, with some self control, and expanded them from our selfish world of children and opened up our ability to see that that thing, the life of another, of our community, of our world, of the nature and nurture of this whole spinning mess, that that thing is the most important thing we have ever experienced, and that thing, we pine, shit, cry, and strive to have, change, and for us, at this moment, know is the most important thing we can consider.

To the youth who have matured to another state, this is a good as all puppies must become dogs, and those dogs must have their day and eventually, die.  We may discard the petty vanities of our ego, of our small desires.  That is a long argued position proposed by five or so religions, seven philosophies, and twenty cults, and one dog controlled by the Devil.  We should not, however, shed our ability to extend the circumference of our humanity and to allow our emotions to extend out of the nursery.  This disassociation and lack of caring is pervasive and mistaken for grow-up being.  The rationality of the failed Age of Reason, Communism, and Corporatism.  Who was it who said – when I was a child, I spoke, and thought and reasoned as a child.  But, when I became man, I put those childish things away. 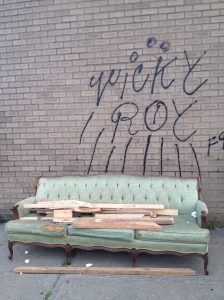 It is, perhaps, time for us to put those childish things away, to send the kidults and Peter Pans to their rooms, to toss the Inner Child to the doorstep of the convent whether they are Nintendos and comic books or Ian Rand meetup.coms and to allow ourselves to fully be adults by realizing that this time we live in, these issues at hand, this point in our history, this is indeed the most important time ever, the most important challenges ever, and to respond not as emotional teenagers, but as those who have practiced compassion and selfishness in order to get them right.

Few will step up beyond eternal infancy of 7-11 Slushie drinks and red herring social issues.  Some will have their eyes opened and answer the call with the passion these times deserve.  And the rest.  Well, you already know because you read this blog. And at this time of year, you need to get out there and passionately can all those veggies you’ve picked.

Perhaps there is some need in this age of over-information to shut down.  To become less human in order to preserve what little we can. There are so many who seem to have mistaken growing up with giving in, giving up and just going ho-hum at everything.  Call it “irony” or cool or whatever you wish, but this is rather than an advanced state, an infantilism.  A return to that prepubescent time of caring only about whatever candy was in your fat sticky pig-like hands and nothing else.  It is hard to expand one’s vision past these small things of our lives.  There is always danger in our expending too much energy or do some risky behaviors such as protesting or writing posts on Facebook the FBI doesn’t like or sundry other things that can damage your credit, your standing with The Man, or your relations with our Corportocracy.    We practiced life through play in order to live.  We practiced feeling in order to be alive.  Now, as adult, as frightening as it is, we need to place these things together.