I swear that I was going to write about this whole electrical thing before the India thing happened…. I mean, what a mind meld if indeed I had timed this exactly to the moment when the plug was pulled on 600,000,000.00 people in the subcontinent. This is a troubling development in the world, a reminder that we hold on to the 21st century by only a few thin wires. Remove the plug and we’re out of Atari games.

This blogger is soon to travel to the center of power. London? Berlin? The Washington of the D.C. or Mordor? No. None of those places produce the power I am interested in. I am looking for uncut power. Raw and natural. Huge and tottering on the insane. The centre of power is not in any of these places of swagger, art or halls of finance. It’s not with The People™ or the corporations or the many many many many petty bourgeois that know something about cheese, wine, or farmer’s markets. Shit, Power ain’t even with The Ben Bernank or The Fed. They are mere pikers in the face of true power, the sort that once belonged to Elder Gods of Lovecraft and the horrors or other dimentions. That’s where I’m headed.

I’m talking about driving to the Great White North. The tundra of the Americas, James Bay and the Trans Taiga Highway.

Yes, you programmers, you digital drone flyers, you many sundry others who think up clever things. The world of power resides in the snowy lands or diverted rivers and flooded traditional hunting grounds. A wasteland of flora and fauna balanced on the edge of nowhere. These lands were blocked and exploded to form lakes filled with slow mercurial waters and whatever dead caribou that fell into the diverted rivers. This melting frozen land is the center of so much of the energy that North America uses to drive cell phone charges, computer chats, and of course, stuff in the puss pictures. The endless expanses of scrub pines and sand is where we have pushed hard into mother earth and reaped “green” energy (don’t google “environmental impact of James Bay” or “hydro electric carbon footprint” cause you no likie what you findie).

We are slowly attempting to move our businesses online, to make digital money and electronic values. We are moving education online and on computers, so that writing or thinking by hand and mind is a seldom done activity and outdoors something one reads about on a tablet or online rather than experienced. We are pushing for a world where the here and the now are replaced by Second Lives and e-somthingorothers as we masturbate to our iWhatevers (or on or though or with) and dream of electric sheep. Even now, I am slowly ebbing the power of dying rivers, eroding neutrons, and melting prehistoric forests in order to bring something we have to consider real, since less and less of that other meaty stuff exists. You are a statistic on my blog counter, I am an anonymous asshole who learned how to type. All of it powered not by clever nano-whatevers, motivated by digital natives and produced by agile methods, but the result of melting waters and salinated forests. Pull the plug, and few of us know how to cross the street, commute to work, or conduct the simplest transaction with a non-e-person. No electricity and no google. No Wikipedia. No interwebs of knowledge or God’s work electronic nano trades.

India languishes in a neo-Third Worldism. This is not the past, something we have escaped, as I thought so long ago when I traveled to the Third World, but a glimpse into our future. Militaristic, corrupt, petty, and with rotten infrastructure. The darker corners of this world – and by that I mean unlit – show us the path to our future and current selves, except I imagine that India and other countries are closer to their non-e-heritage and remember what it is to not have e-verything plugged in than we are.

The lights in New York and much of the Northeast went out some time ago. The city did not end, but it was tried. The lights came on and several politicians of the BuAlshGore administration wrung their hands and some talking heads exclaimed about the emergency of infrastructure and this and that…. And then, suddenly, ten or so years later, nothing has happened.

Outside my pied-à-terre in [city] a transformer exploded one fine night. Just blew our three manhole covers and smoke and flame poured from those godly holes. The other week, a line just melted and dropped down into the street. Another one, right outside my window glows hot, sometimes sparks, when the heat of the day is ending and the air conditioners are cranking. Our veil of civilization is not guaranteed by clever iEverything. Turn off the lights, and our kids are no longer digital natives. They’re compost waiting to happen. Fodder for rabid Amish or raccoons. Video games may be preparing a generation of youth to unload ordinance on sand Npeople thousands of miles away in some Ender’s Game performance art, but unplug those clever bastards and their hand/eye coordination ain’t shit next to the thick hands of some angry goat herder who has slit a thousand throats of goats. Hello India, can you connect me to the help desk, my power is out and all my vegan treats are melting.

I want to see where this power comes from. The raw material of all the internet posts, tweets, e-books, Huge Naturals dot Biz, and the stuff that powers the machines that make the crap we use that washes into the oceans and forms the great garbage continent of Trashistan or Garbagaria or Refuseiana or whatever the fuck we’re calling this new “land” of Big Wheels and Capri Sun pouches floating out there slowing working its way into the food chain until we are all stuffed with cancer the shape and texture of those bippies that fill carnival stuffed animals. It is these waters along with natural gas, coal, and nuclear energy that keep us connected to The Googles, The Facebooks, and The Twitters. 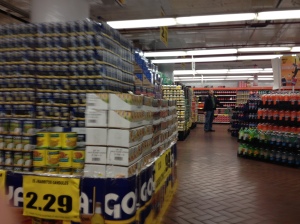 We have not gotten smarter as a species, only more clever. Trip on the huge extension cord and we’re back to toiling in the fields, and bashing each other over the heads with sticks…. Except that most of us are fat and partially retarded. So, most of us will die on the couch sniffing the cushions for Doritos particulates or lost Crunch-N-Munch nibbles. India can make it with a few days off the grid. The rich have their generators, the poor lived on .39 dollars a day, the middling peoples will lose a few wages and swelter in the heat their ancestors were built for. However, what if it were a week? A few weeks? A month? Or here for that time period? What would we do when the fun of camping wore off and the hot, grit, thirst and hunger set in? The End of The World need not take a highly combustible cinematic Bruckheimer (sp?) spectacle. It may be a damp, warm, melting, boring stretch where the stop lights no longer organize a people who have lost most of their sense of sense so used to external rules and sundry representatives of the Police State telling them which direction to drive, wipe, or walk.

In this summer of strange weather and financial-failure-d’jour (just today another…. Yawn…. Scandal about e-trades), cultural stultification and fake electioneering, we have learned that air, earth, wind, and fire are greater powers than the Digital You, the stupid computer you waste your live in front of, or the e-stupidfuckingthing you’re building. In this game, the Game of Life…. You die once. And there’s no Power Ups, One Ups, or up up down up down left right left right a b a b select start to save you, or me.