This Call is being Recorded for Training Porposes… 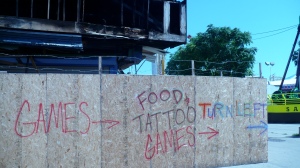 This way to the US economy

So, we know that we live in a time where the rule of law is set into two distinct courts – the rules that apply to the little guy, and those that are used at whim by the big guy.  This is nothing new, in that we see the “He who has the gold, makes the rules” and for our crass age this is not the cynical version of the original but the only version people know.  We follow our scripts more and more, as we believe in the existence of society that is quickly fallen [sic] about around us. There are metrics, we are told, in place from government through the private sector.  Laws in order, we are told to protect us and our rights.  We are told a lot of things, but if we use even the critical thinking skills learned in the first semester of a top notch high school or the first year in a bottom tier college, we know that saying something does not make that things said true we need evidence or proof.  Aside from UFO photos and sightings of Bigfoot, which are real, the proof we are given are circuitous logic and hot air.  The ruling orders don’t even bother with the grainy photographs and plaster casts of … uh… big feet…. in their attempt to tell us something is true anymore.  The truth is based on metrics that apparently are slanted due to whatever funder is paying out the bill, or just made up in toto.  The government awards huge defence contracts, invades sovereign nations, and goes on a bullet buying spree by a kid too young to found an internet start-up social networking site without even checking the “born on” date of the ordinance purchased yet measures every fart a child has in a Head Start Program to see if it smells like literacy.  The most pathetic contribution to the arts, to education, or social services requires reams of papers, monitors, audits, records checks and countless changing mandates (funded or not) so that the public knows where it’s tax monies are spent on American children, families, and indigent, yet oil rigs are approved based on blow jobs and a few lines of nasty or billions more “lost” and considered part of the “process of nation [Iraq or Afghan not USA] building” or a reasonable expense when handling so many little hundred-dollar bills.  Why is it that th banks can do whatever they want, and the small businessman has to jump through hoops?  Why is it that individuals are “empowered” as consumers to untangle health insurance, health care, etc, etc, etc, yet time and again carte blanc is written for the corporations and their governmental lackeys?  Oh, because of the Golden Rule.  He who  has the gold makes the rules.

It is funny when Jon Steward says of the iTunes agreement, it isn’t like we read those agreements because the amount of shit we must eat daily only to wash it down with a tall frothy glass of pee grows and grows every day as we, the empowered consumer (praise be his name), know that this has entered the cycle of never-ending rules, never-ending government.  What is a DMO, what is a PPO we may ask?  Who cares?  We’ll just have to learn a bunch more new words next year for the old axiom, he who has the gold makes the rules.  And never question the system.  The system has its own internal logic and while we are told to “think outside the box” by upper management what they really mean is, when I do something it’s ok, but when you do it, it can lead up to and include termination.  The man/woman in the street/avenue is regulated by protocols and regulations, dumped on with rules and hidden fees, crowned empowered consumer forced to choose what is best for him/her as he/she/it (s/h/it) has to guess which brand of what will lead to labial/scrotal cancer or a life of everlasting comfort and joy.  Where do we go with these choices, especially when, under the mantel of our free market, our market and choices are not so free as our new SOVIET propaganda has us believing.  Take the average interaction these days with the few prols not replaced by machine.  “Welcome to XYZ, I’m [Mindy, Bob, Ubango] and I’ll be here to take care of you.”  The long-winded welcomes and after our POS our POC server-person-thingy has to again give us some long-winded shit bidding us farewell we thought we left behind in some fucking 1978 Renaissance Fare –  “Well I/we hope my/our service to you/thou was appropriate and that once again, from glen to fen, your/thy business will returnist to mine kingdom to grace our store/department/sector of the forbidden zone with …. blah blah blah.”  Just try to cut into the script to see how little control you actually have in this process, since this is not a human taking to you, but an extension of the ones who make the rules.  The gold holders who write scripts since the only way we have a choice, is if we’re made to say “yes.”

“Hi, I am trying to reach blah blah blah, is this he”

“Yes, I’m at work so can you tell me why you’re calling”

“I’m calling with an important announcement regarding your credit card…”

“It’s important or I wouldn’t be calling you, so thank you for allowing me to speak.”

“This call is being monitored for….”

“No, this is about your credit card.  We wouldn’t be calling you if it were not important and since you have been a good customer we don’t want anything to happen to your credit report.”

Ah yes, what was I thinking.  He who has the gold, makes the rules.  I/we am/are all ears.