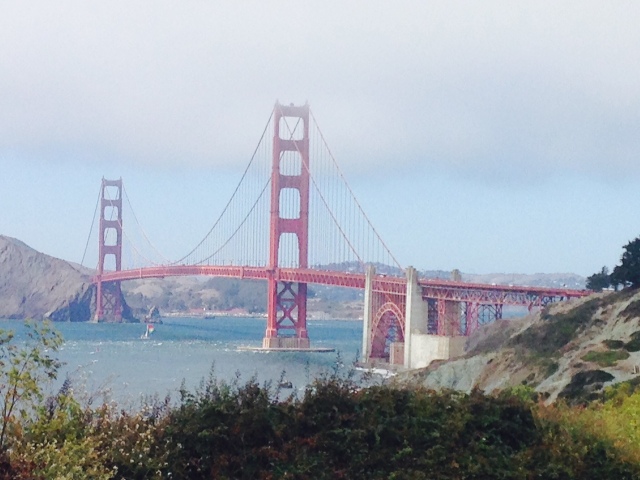 To say “we stayed in The Casto” is not so much identifying a point in the landscape as it is to position one on a dot, a pixel within in the imagination of a culture.  In those centers that attract media-TeeVee-people, New York, Los Angeles, Chicago, New York City, LA, NYC, and San Francisco the image and vision of so many locations have become subtile substitute memories for so many.  The street corners have appeared in commercials, films, productions, photos all presenting as themselves, pretending to be themselves, or pretending to be somewhere else.  TeeVee people open their windows, look outside, and write what they see so that in it a small world after all made ever smaller by concentrations of vacuous bible fingers typing away tomes and compiling modern day myths for us to absorb subcutaneously. 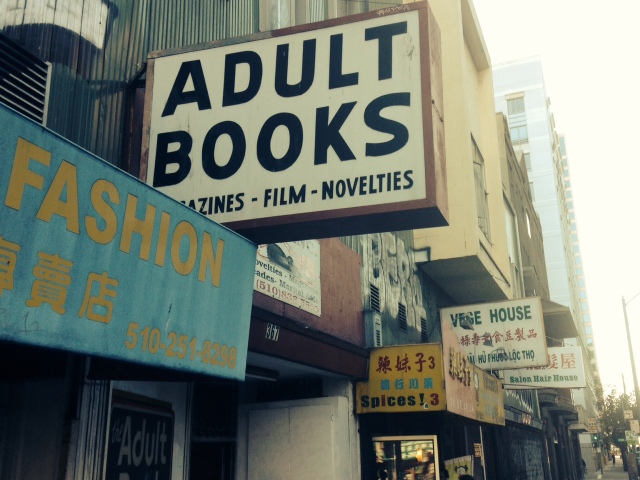 These locations are broadcast and made real in an imaginary way and we stitch them to our own lives.  Crosby Street, but a short lane in New York City, is the location of 100.34% of all crime drama alleyway locations, and so you have been to that little street so many times since you were young without even knowing it.  I have been to San Francisco for years and years, even if I went there in for reals only this summer.  In many ways I have always been in the Casto I have always partied in the Mission District, I have forever eaten in Chinatown even before I touched those spaces, and because of time and other constraints I/we did not eat anywhere in Chinatown for reals.. 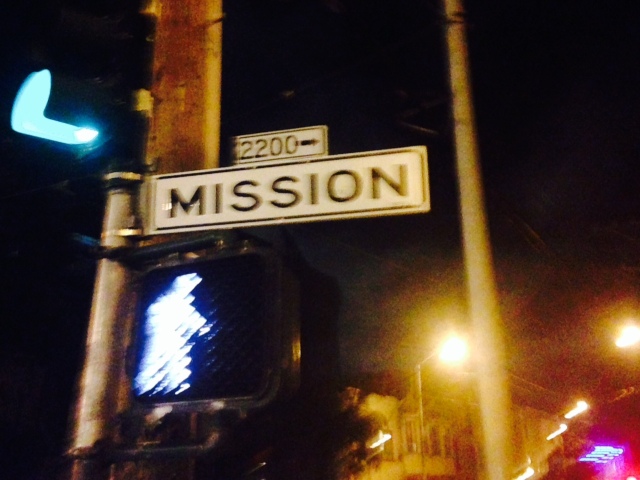 I first saw San Fran when I was a child, on either channel 11 or 9.  It was some comedy with that actress and some leading man and there was a car chase down those fabled steps or maybe it was that twisty road, “Hey you!” the kid me thought, “you’re not supposed to drive like that, that’s silly!”  It was a romantic comedy or perhaps it was It’s A Mad Mad Mad World, also a comedy, but not in the least romantic, but funny as hell.  I know there was the street car in the movie, Chinatown was there, those Car Chase Steps, and of course a fruit cart or plate glass that in the end got smashed or overturned or both.  Or perhaps that was a commercial for Rice-A-Roni and just what the hell is an “A-Roni” other than, as Wikigooglepedia says, a “pilaf-like boxed food mix” absorbed only through the lower intestine. “Rice-A-Roni, that San Francisco treat!” my colon still sings every time I see a box festering on the shelf.
There are many and fabled spaces of San Francisco all each with their own story and lore and often writ large in the cultural landscape in film and TeeVee and Movies and the personal legends of so many people who speak of that time when they too lived “on the coast” our in “San Fran” or “SaFr” or “SF” or “Cisco” or “Ci” or “C”.  I’m going to call the city I actually visited Fran Fran to differentiate it from that fabled city in your mind you know all too well known as San Francisco. 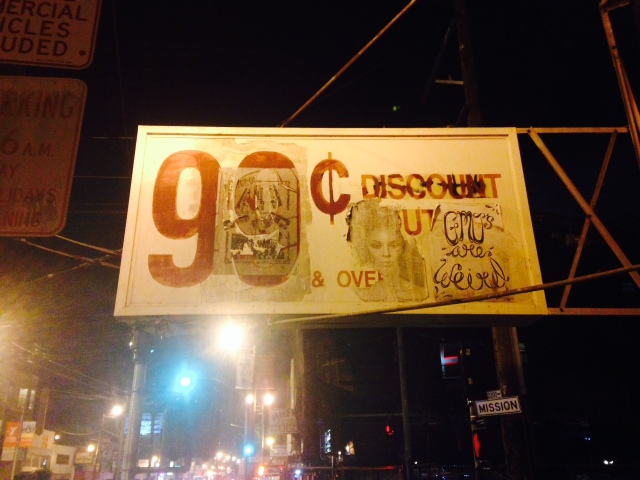 I was not to see Fran Fran for real until decades after my youth long into the twilight of my middleagedom.  This first time was from the heights of a connection flight where I saw The Bridge, and then the city was twinkly lights in the distance seen from an airport hotel.  A mistake of timing had bumped us from a flight from Hawaii to [Redacted] and I said to my friend or lover or imaginary friend Harvey.  Hey, let’s go in to the city I may have said – since I thought we were close but on the way out of the hotel the doorman of the hotel dissuaded me/us since public transportation was running late and the night doomed us to miss the action, and who wants to take an $80 USD round trip to see closed shops and empty streets anyway.  And,the doorman reminded us, we were way way out there in the sticks. 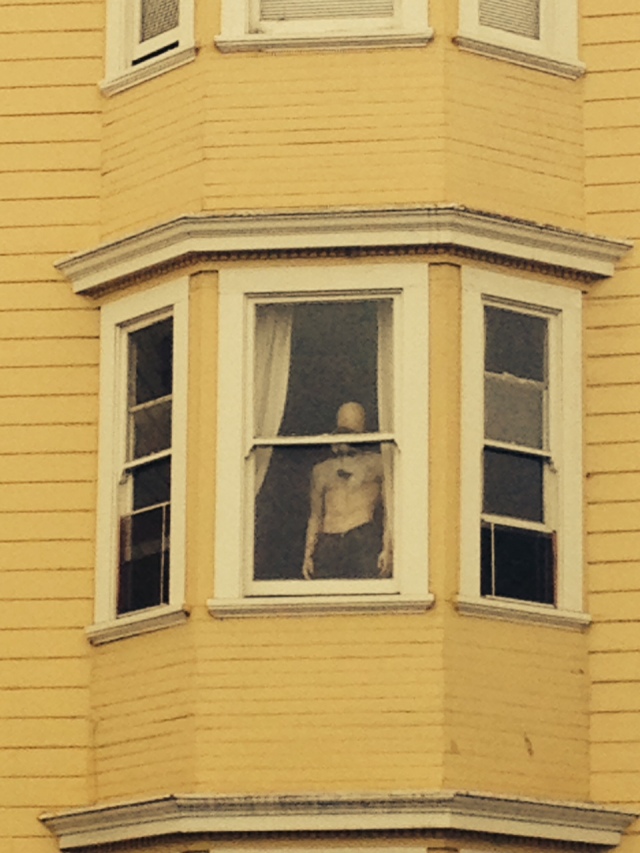 The next time was better planned.  We arrived by rail after a pleasant journey across the entire country.  We were to find room in the middle of the city and not in the hinterlands.  This time we had exactly 48 hours to see all of Fran Fran.  Another blow through (see previous meditation on blowing through HERE) adventure packing far too much in a short amount of time.  For reasons both economical and otherwise the home base for these 48 hours was in an old hotel on in the Castro District.  A former flop house turned alternative life flop house transformed to modern day traveler flop house, the hotel was just on the edge of this The Castro District next to an historically gay bar an historically gay barber shop.  The area had once been a homosexual/gay bastion and a “safe space” for all sorts that did not fit within the dominant cultural hegemony…  especially those of a sexual nature.  There were a few Pride flags here and there but living in Gotham and being about Christopher Street (believe me you have been there too), the area looked a lot like some other well-restored Victorian urban neighborhoods with many many little dogs and few little children.  A cultural informant said that the area was now being gentrified. New people were moving in, people with money, people with two incomes and no children (TINC). I passed a group of men talking to each other as much as they were also staring at their phones. I was hard pressed to identify the Olde Guard from the more recent barbarian.  To me at least, their skin refracted the spectrum in a similar manner.   Their attire appeared as if from the same catalogue perhaps only separated by a page or two and as to who was CIS amongst them I could not discern from a glance. 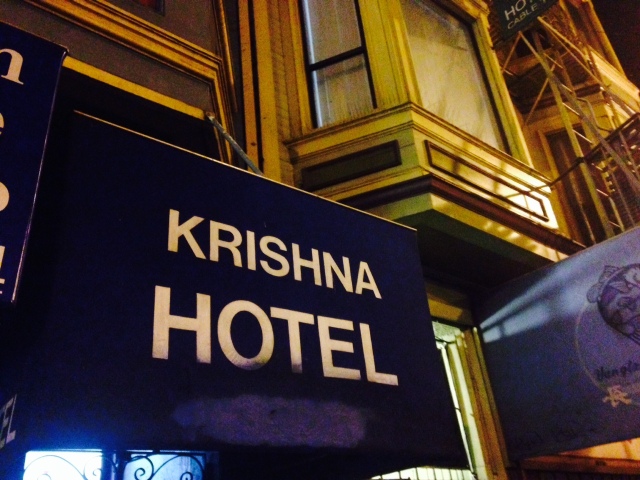 The Mission is also undergoing a transformation. The Mission had once been forest.  Then dinosaurs took over and millions of years later several movies theaters were built up and down the primary streets along with a number of quaint stores.  Then, everyone died, things turned ugly, and drugs and poverty moved in.  Today, drugs and poverty are up against their hardest challenge yet, gentrification.  This time, it was more obvious who was the newcomer and who was the Olde Guard.  The old guard stumbled about while the newcomers were well on their way doing this and that and chatting away on phones and waving about selfie sticks and talking loudly.  There are still hourly hotels with their clientele coming in and out.  The cheep merchandise and bad life choices for sale as well as boarded up spaces with one or two shops you need be buzzed into. 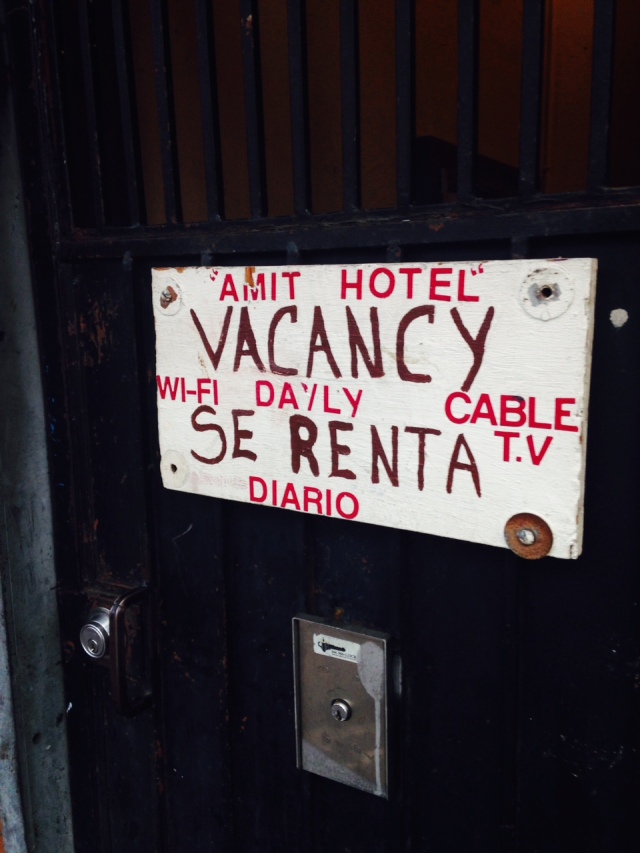 With the influx of Dotcom startups and their return to using Yuppie Coupons for drinks, there is stress put upon the poor, the addicts, the unwell, long-term residents, and long-term poor unwell drug addict residents.  This has led to the area having several establishments where even a rustic traveler from Gotham blushes at the price of a drink with an umbrella in it.  One great bar was the [bar name] which offered wine and cheese plates and while it was under a scaffold we could see the hustle and the busstle of the historically poor neighborhood and historically poor shops.  In a matter of years The Mission will be an entirely new place, but not before enough models have been dropped over rotting examples of Urbandecayporn and hard hitting docudramas are filmed there by students and studios. In a way, you have already been to The Mission, as you have been to all of San Francisco.
In the end, we saw Fran Fran.  The bridge.  The park.  Saw the hills and even the ding ding Rice-A-Roni trolly.  I hope to return, and perhaps I will, if only through next film, video, TeeVee programe, or romantic comedy staring whatsherface and whosehisname. 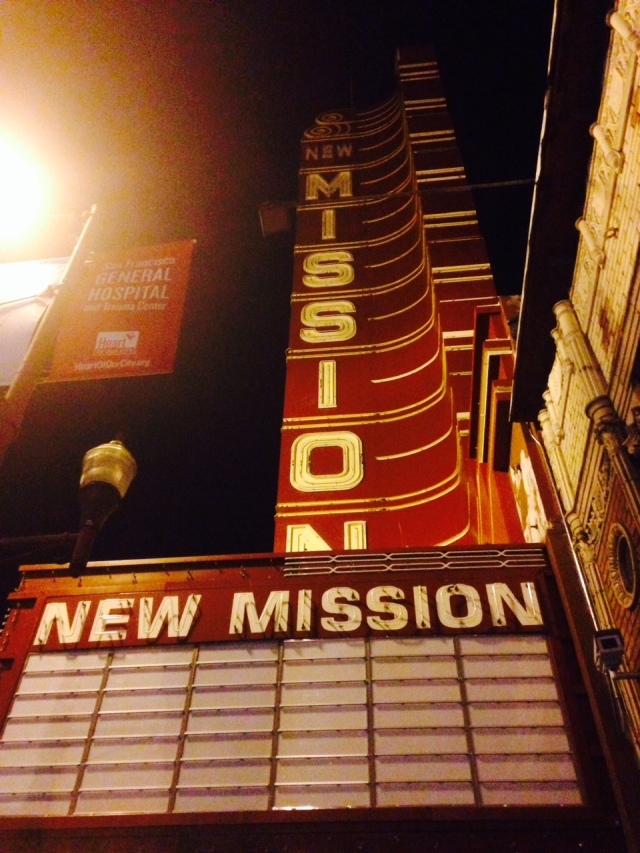