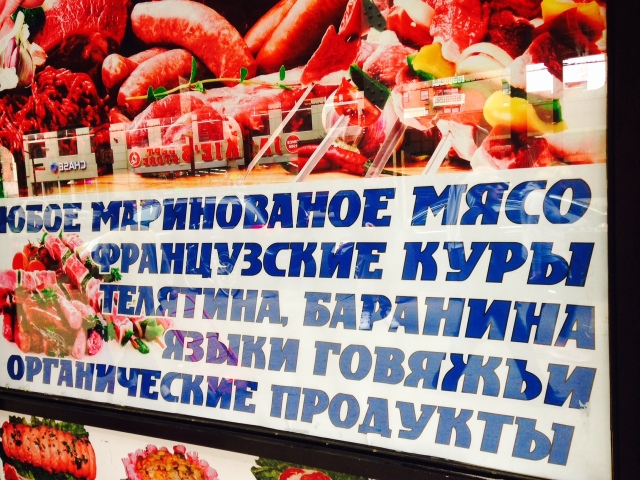 If you are a frequent vacationer to our beloved Gothem or a hipster, the last and final place after JacksonohmygawdthediversitylorretalookitmydrinkumbrellaHeights you must visit before officially having eaten at every G/o/_/d/s/es/ess/es damn ethnic neighborhood is Russian Parkway.

Russian Parkway is down at the end of several rail lines and just over a little from The Mermaid Parade and slightly up from the watery sandy Brighton Beach parts.

A neighborhood build by Refuseniks or perhaps it was just those old Slavic people of Ellis Island who settled in the sea side since they missed the Black Sea and Gagra and they could never return, especially since, it was rumored by many who lived within Gothem, that not all of these Refuseniks met the criteria and a good part of them were Bosses and Commissars who knew the collapse of Empire was upon them.. a Длинные аварийного, so to speak, and took the money and ran from Soviet Union. First to Palestine, then, when they saw that foreigners of more swarthy countries were not exactly welcome, to the only true Homeland for the Children of Abraham, Brooklyn where, as long as you didn’t mess with the Church of Rome, you would be left alone in peace.

My first visit to Russian Parkway was a long time ago. So long, I cannot recall much other than my parent told me to keep my head down in the station wagon. It was a different neighborhood and in my parent’s defense, a few years after the events of Dog Day Afternoon’s took place.

When I went to Russian Parkway as an adult I lived in Gotham and did what all who enter the city do. I explored. I took subways I sized up the city I searched for a place here I tried to make a life. I had been to Russia after a few failed attempts to get scholarships to study there or work there or whatever, but not as epic as my inability to learn Russian and true, to this day I still struggle with English as she is spoken. I liked The neighborhood but I was wanting to live and work closer, if not at the heart of the city. And this was far far far from the center of the city, far far far from Union Square or where at the time I imagined I wanted to be.

Russian Parkway in a part of the city that was tossed up quickly and without much thought. A mixture of summer cottages with additions, simple brick building with small cement friezes that have baked in the sun so that everything is discoloured and pastel and becoming sand. The area had blossomed from rich farms and tough fishermen into a thick carpet of cheep development in less than a decade. Add to this the projects – huge holding tanks for poverty and unregulated reproduction and the area takes on this odd convergence of people who rushed to be here, people who always have been here, and people who don’t want to be here.

Today in this shifting city little has changed in decades except that mixed in with the Russian signs there are a number of new languages and along with scantily clad Slavic women are those wrapped up in various flowing drapes and fabrics baking hot and unshaved in the beach sun. A few of the sun dried building of the last century are tumbled down to make way for newer, cheaper buildings that will have their turn to bake and flake in the sun. I can only assume this is the cycle of life out there.

As I walk the street now, the shops had their stock outside on tables, or at least the Russian food stores. Packages of fish, soup brands unrecognizable and frightening in their composition, sticky syrups and jars of pickled everything from peas to 1930s comic books and all with fake home style lids so that it looks like nana caned them not some machine in Machinigradyorsk.

Picking though these deals are old women, perhaps the same old women as I had seen last time I was here or a decade ago or back in 1981. They perhaps were born that way and will remain that way, forever old and gathering provisions in jars and placing them in wheeled folding shopping carts. To this the fur coat stores, jewelry shops, and many pharmacies suggest that this is a colder, gray, angrier, northern version of Florida.

One of my favorite memories of Russian Parkway was being invited to a wedding there  back so many lifetimes ago that I believe I was married at the time, too.  The venue was one of those Russian palaces.  Some kind of a super huge places with ticky upon tacky that pumped out weddings non-stop. The party was a mixture of conservative Jewish ceremony and lewd acts just this side of a strip club.  I remember the dancing girls, the drag routines, the flashing lights and the dance party where young and old and downright elderly rocked and tovah-ed.  It was a great party.  The rock songs, the sexy girls, the flowing vodka.  What a sweet dream, and certainly… the best wedding I have ever been to (apologizes to all other friends but you should have had strippers at your wedding… ah… uh… ahem).  But, this is the interior of Russian Parkway, the places you need be invited to.

Outside on the dirty streets it is like Moscow in the long faces, shops of strange cured fish, and grandmothers who can knock you down with their right hook.