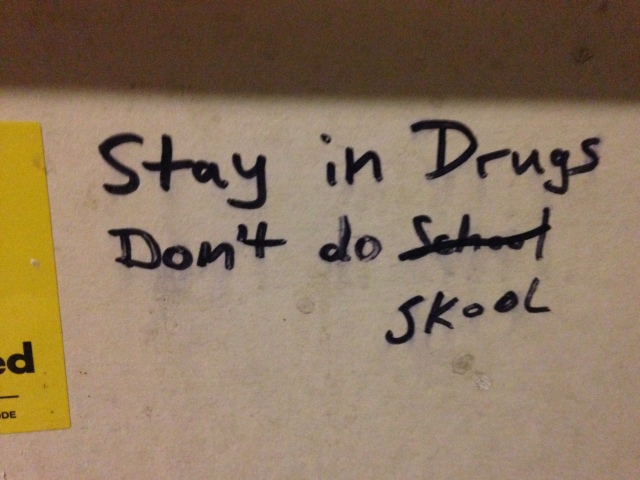 Being a bum is nothing to be proud of, is it?  The ragged people flopping about the city.  The pushcart people out at the edge of the parking lot.  The soda bottle scavengers and scrap metal addicts who wheel through the lower areas of our Great Nation gathering various bits of air conditioners and sundry other parts scattered about.  Vice (a terrible magazine that puts out great documentaries) had a short documentary on the hobo as a vanishing breed.  Strange that I know at least five people who have traveled across the land on trains as hobos.  Maybe that’s just me and the crowds I run into.  Perhaps the folks at Vice were running with the wrong crowd.  The lure of the hobo is perhaps not that of risking everything for a free ride, the thrill of jumping onto a moving train and somehow remaining on the beast as it plunges through dark territories better fitting for UFO abductions than gentile travel, the adrenaline of escaping the “bulls,” but those elements together may lend to the adventure, but deep down it is the appeal of freedom.  The ability to turn in turn on and drop out, which while not framed the same way within each generation, there are those of every generation that seek more our of life than the script of the time, who lean out the window of the car as it moves and just won’t listen to dad when he yells to get back inside.

There is nothing romantic about being destitute. There is no honor among the hungry.  This is the other side of the hobo.  The other side of freedom.  There is no allure to living a short and dirty life – however, the hobo or the traveler are not quite the lowest of any society as many would have proper society believe.  Yes, those living quiet lives of private desperation in Connecticut suburbs, those in the exurbias of North Carolina, the Beltway bedroom communities, the solid tract of shit surrounding Miami, Dallas, L.A., the gated communities of wherever, those who dwell in the manicured lawns of the landscape of nowhere, all are to fear the semi-nomad, the nonconformist, and those who do not respect all those Posted signs bought at The Home Depot or Lowes. The traveler or hobo is not the crack addict. Addicts need to be rooted in their chosen network of people, places, and things.  This leaves for little travel.  The hungry swollen belly family do not take up the open road.  There needs a spark, even if that spark may have been boredom.

In decades past this was the same. There are those who choose freedom over slavery.  The explorers.  The runaway slaves, the gypsies, the tinkers, the tartar hordes. Cossacks….  The Black Hundreds…. Vikings.  Some of these travelers were to be kicked about, others traveled to do the kicking. In the more recent years the Hippies, the Beatniks, the Pioneers and all that Westward Ho shit, or perhaps other less defined groups that may or may not be lionized in literature.  This country as many others in the colonial sphere were complimented by rogues and adventurers as it has been plagues by despots and fakes.  Things moved along, each decade or so producing those listless and those who warned the ensuing generation to watch and learn from “those kids” since they should not grow up and become “those people.”

Today, there seems a dwindling number of places to move about as there seems to be a pervasive conformation within today’s youth.  The fencing in of the land has turned the woods into small postage stamp size (kids, as your parents) plots and borders have become solid and static, impossible to cross and watched by digital cameras and private security companies and so the kiddies turned into couch potatoes and their lives turned inward to video games, structured playdates, and schedules they must follow if they want a Goodjob(tm).  The hobo finds the rail yards more inhospitable and the trains themselves unwelcoming metal platforms where cargo shipment containers filled with bippie dogs or Christmas Critter sweaters are stacked high.  The campsites have registration forms and reservation lines, the open spaces and parks policed as we increasingly expect surveillance in our daily lives whether by the candy shop cameras, the police license plate scanners, or the three hundred passwords we must remember in order to do anything online that track our behavior to which that data is then sold as a product. Frightening, if one thinks about it.  So perhaps we shouldn’t.

It was said that the spirit of the Nation changed with the end of the frontier in 1901.  Again that spirit changed with the end of the Great Patriotic War and the expansion of private property plots as fields were turned into grids of miniscule lawns and pathetic duplicated houses.  Thirty years of economic inequality and out of control litigation that today clogs every branch of the judiciary (I wouldn’t mind trading some skin of my crotch for a million dollar hot liquid settlement) just continued that post-war society in an increasingly mean and cheep way.  It wasn’t until 2001, a century after our frontier closed that the character of the people of this land again changed.  Emerging from the wreckage of that day was a whole new society.  One where neighbors fear each other just a little more.  One where we have more cameras, more No Trespassing signs, more militarized police, and we accept more of this, accept as normal levels of unfair and unaccountable surveillance and scrutiny by official bodies and corporations that no hippie would take, man, and certainly fewer of those Greatest Generation people which all their I Died For Your Freedom.

So it is not surprising then that being a nomad has become more complex if not impossible.  Every now and then a number of goat herders are blown to bits overseas.  An object lesson to those of us who wish to walk across the land and sleep under the stars off of the official trails and campsites.  Certainly with all the cameras and security, harder to escape suspicion and detection.  Can we imagine what Jim Crow would have done with a few cameras and drones.  Ms. Parks would have been biometrically scanned as a troublemaker and kicked off the bus before taking to that front seat. Can we imagine what Joe McCarthy could have done with Gitmo? What Nixon would have done with hundreds of classified security agencies at his fingertips?  How much longer would the Vietnam war have gone on?  Would the Pentagon Papers have been published?  Would the Watergate scandal have resulted in a few reporters sharing a cell but nothing else?  We are a much different place than just a decade ago, and certainly seem to have fenced in our minds against unregistered movement and unlawful activities.  Such as traveling about as a bum.

This past week, as a person between employment, I took to being a bum.  Retreating to the mountains deep into the recesses, far away from the society I knew, or the rat race that recently rejected me in order to live life unfettered and just enjoy the open sky, fresh air, and do a few runs.  So, we rented a condo at the base of the mountain, bought some lift tickets and got our hands on whatever equipment we didn’t already own, and took to the slopes.  We took advantage of all the fresh powder on almost empty midweek slopes.  We explored as much of the back country as the snow pack would support.  For a few days, there was a simplicity in our freedom of getting up, walking to the lift, and being free… at least within the confines of the property boundaries.  It was exhilarating experience for a few short hours each day. Sort of what the Hobos on that Vice documentary would talk about.  Just being able to be alive for one’s own self.

On the dive back we returned to the Landscape of Nowhere.  The Big Box stores, the KenTacoHuts, the cities looking either quaint and abandoned or as if they were carpet bombed and partially rebuilt by car park companies.  Are there still Beatniks out there able to enjoy the open road?  Are there places where we can go to experience the open sky, or has that been cut up into pieces too?  If the price of freedom is to work 9 to 5 in order to afford it, perhaps that is the true cost, as the true price of safety is to turn out country into a network of cameras and (coming soon, officially) drones. I bought a Red Bull at the KwikEmart and waved to the camera.

One thought on “Hallelujah, Bum Again,”