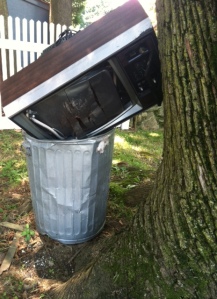 There is an old film that I watched when I was young where in a fierce snowstorm two men were stuck inside a small cabin that was blown to the edge of a cliff.  The two men, desperate for want and hunger, were fighting, and their struggle took the small cabin at once tipping over and then resting right on the cliff.  This was a comedy, a Chaplin film of some kind, perhaps Gold Rush, I think it was silent and while I was very young, perhaps 10, the film was far older, perhaps 60, but the comedy was still accessible.

And today, that same image, of the cabin on the edge, the men fighting inside tipping the balance towards destruction or safety but the cabin never is quite out of danger nor does it plummet into the abyss allowing for a final outcome of whatever battle even if that outcome was determined by physics and gravity and chance survival rather than intellectual trickery or acrobatic nimblatude of The Little Tramp or the strength of Whatstheotherguysname serves as our metaphor. The cabin, the state and economy, is balanced on the edge of the cliff, the two parties, both clowns in their own right, are attempting to eat one another and their antics neither serve to give a final blow, that collapse that determines a winner, even if that honorific is by chance and not worth, or finally resting this structure firmly on the ground, even if that ground is next to the yawning chasm.

I believe I remember this scene in the film going on for hours, or for a young mind as I had, it seemed like hours.  At least most of the first reel was taken up by this.  Or did it just seem so?  This similar condition plagues us.  The tipping back and forth continues on and on, with each tussle of our parties we think one side or the other has the upper hand, with each tip of the cabin, the furniture goes crashing, some even out the windows and door to and to the icy rocks below to be dashed to smithereens, but then the cabin rocks back into place and the inmates of that mess keep going to blows.

We want this to just end.  To just conclude in a way that we can make our peace with our Lord because humanity is finished, or make peas into soup because we have returned several centuries back, or can know that we indeed should have learned Linux or connected to the Code Academy because the world will be that teachnobasturbation foretold by certain magazines such as Wired and Fast Company.  That is, Wired and Fast Company.  We live only once, or at least only once we know of.  And it looks like events we thought would take place in years don’t operate on that same scale as us mortals, we little dogs spending out years fast and quick as our masters continue to see time as relative, their mismanagement something that requires a stop motion camera and is not caught by the naked eye.

Another plunge in values?  Just a blip.  Another war?  Just a spot on the sun.  Another loss of rights?  We’ll get a few back so it doesn’t seem as bad as when we lost them all.  Another trial leads to another committee, another headline, and another news story that lasts a few weeks, perhaps as long as months if one takes into account the BBC and Al Jezera.  We, those little people who pay the taxes, are hounds who expect that every time master leaves that he won’t ever return, but master just went to the store for a moment, to relieve himself at the gas station, and he will return.    And we will think his return means something…. But it won’t.  We have forgotten the Long View perhaps.  The epoch, the true meaning of generation before it was a marketing term.  We have forgotten Conversations For Tomorrow, and Civilization, or that when Carle said “billions and billions” that he meant many many many, and that the google was a number you could get lost in and not a search engine.

My weather predictions are just as bad as my political.  I expected a hot and dry summer, drought and such followed by a cold and wet autumn in the northeast.  I was wrong.  I thought that 2008 would have seen the euro as a new central currency.  I thought the government would bail out individual homeowners.  That the car industry take-over would result in drastic changes to our transportation issues.  That Gitmo was really going to be closed and our wars drawn to a close.  I was also wrong on all that.  However, I was also wrong that any of these things would drastically change our situation drastically.  I mean, there are drastic changes for some.  Monsanto has put a great many more farmers out of their farms.  Individuals were tossed out of their houses.  People have lost their jobs and have stopped looking.  Some children were blown up by missiles launched by drones.  For certain people, life has changed, or even ended.  For the majority of us, there has been neither final plunge, nor a save allowing for a collective release.  A “whew that shit was close” moment for society (*some perhaps thought this with Obabuclintmashon’s election).  However, the experts are no less accurate.  The chattering classes of cock-n-bullers and nattering nebobs of negativity are no less correct when they yell “buy, buy, buy” or “sell, sell, sell.”  They too seem mystified by the rattling of the cabin, not sure which direction is up, and no longer care as to the motivations of our warring parties.

Who out there in Tee Vee Land remembers the Great Svengali?    We need him back.  A fortune teller.  We need someone to just read the entrails of a goat and that’s our nightly news and analysis.  A real spookie mumbo jumbo, with a dash of the hibbidie jibbidie, and smattering of the hocuspokus, and some tada girls with huge tits.  That person can’t be any less accurate than the chattering nattering nebobs, the faux “experts,” the NPR Cookies and Raceclassgener™, the New York Corporate Shill’s Times, the loonie lefty lamenters, the waffling webbie technobasturbative, the blogospheric blabbermouths, the crooning commentators, and the trolls.  Right now, the fucking trolls are about as accurate as anyone else:

Meowmeow99 Your an asshole Chummy987 u dont no what it is to work hard and real world conditions. The problem is we all need to come together and work to make that world we want cause its hope and change all the way J

I read the WSJ for years.  The Economist.  The New York Times.  Studied Political Science.  Watched Frontline.  Read books of all kinds.  Studied history.  Wrote a thesis on historical events.  Graduated from a Junior Ivy.  Studied markets and invested in tech stocks.  Got an advanced degree in what seemed a stable area of work and a field I thought I could actually contribute to (education).  Bought a house in an up-coming neighborhood.  Thought about getting a Ph.D.  Lost the job that would have paid for my Ph.D.  Lost all my investments in tech as the bubble collapsed.  Lost the job that afforded the house.  Had to find a job an hundred miles away from the house.  Lost the marriage that went on in the house.  Lost my healthcare for a time.  Lost my way for a time.  Spent time living on a motorcycle between looking for a job.  Found my way, again.  Found a job that paid less than what I had been making.  The cabin tipped back and forth, but I held on.  Nothing really happened. As a matter of fact, my life is much the same as when I was a teen.  I make the same as I have made for the past five years, and inflation adjusted, I make less than when I was 19.  Only now, actually yesterday, I found out my credit rating is almost 800.  Because every penny I make goes right out the door to pay my student loans, credit cards expenses from paying bills back in 2008, credit card expenses due to a minor health issue, utilities, and sundry other expenses too moot to mention.

I continue to read the Doom feed.  Every week I try to catch up on what I can during the short snips of time I have.  I continue to read the comments on certain sites.  I continue to try to hang on, but I understand better that these events, this tipping back and forth, the fighting of those in power, this is but a comedy that entertains us because while we have a economic crisis d’jour, the Long Emergency is indeed longer than many of us have time for.  However, this means we have more time to prepare ourselves, and build a network that can withstand not a singular event (the fetishists who believe in EMP blasts as some believe in Mohammed), but to be strong in the face of a declining state of being, economically and environmentally.  This perhaps is good news.